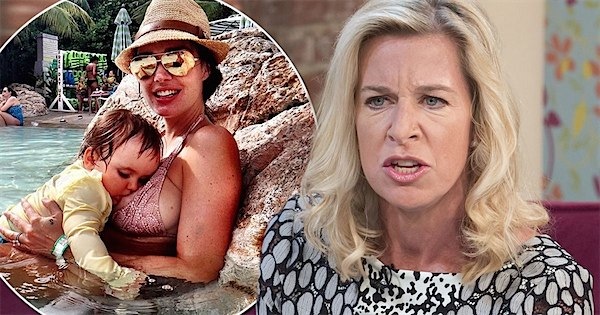 Sometimes, life can be very unfair, and we don’t always get what we want. Last week I was watching the TV with my husband when he switched the channel and on popped everyone’s favourite motormouth Katie Hopkins. Love her or hate her, her opinions are definitely controversial and upset a lot of people. Interestingly she was discussing breastfeeding and as such I told my husband (who sighed knowing full well that he was about to get his ear burnt off about breastfeeding rights, gender inequality and feminism – you know, all his favourite topics) to leave it on so I could watch her make a tit of herself (pun fully intended). Instead, I ended up coming to an understanding of Katie Hopkins that I never had before and I feel sorry for her, truly sorry for her because I’ve been there.

When I was pregnant with Reuben I was like so many first time mamas. I wanted a natural birth in a birthing pool and I wanted to breastfeed. So badly. If you ever read my story with Reuben (one of my first posts on the blog) you will know that I never did breastfeed him. I was one of the few unfortunate ladies would couldn’t feed myself because of bodily trauma. After I had my c-section, I became so ill and I genuinely couldn’t feed Reuben, I had no milk.

At the time I remember having a bit of a cry and then convincing myself I was fine, if anything, it was better this way. There really was nothing more lovely than watching my husband feeding Reuben and the love in his eyes. I ignored the anger I felt when others would just whip up a bottle and say, ‘Ohh my turn!’ and pass him around like a parcel. Bottle feeding was so much easier and, hey, it didn’t matter that it wasn’t ‘my special time’ with Reuben, right? I started telling myself that it was better this way, I could go out and enjoy my life separate to having a baby. That was great, right? I distinctly remember a couple of our friends were getting married about 3 months after I had Reuben, and of course we were invited to the wedding and all of the pre-parties, including the hen and stag doos, which were when Roo was 6 and 7 weeks old. I was adamant that neither myself nor my husband would go, he was adamant he would. It caused a big rift between us at the time and I was furious. He was meant to be helping me. When I looked around for support all I was told was, ‘You should go, you deserve a break… Adam’s so right to have gone out, after all, he needs man time too’ – a phrase I detest, his penis apparently means he requires additional time to be alone now? Ok, got it. I remember pressure from every angle (apart from my mum who knew me well enough to understand that I didn’t want to be separated from my new baby, even for a few hours) and I remember being told over and over ‘Gosh, you could leave him with any of us, after all, we can all feed him’. Each time, it was like a knife to the chest. I was just so… Unimportant.

You have to understand, this might come across as dramatic now, in fact, I’m reading it back and it clearly does, but at the time, I was hormonal and angry that my body couldn’t do what it was meant to. Even as I type in feeling that anger again. Listening to Katie Hopkins on TV, it struck me when she announced, ‘Breastfeeding in public is just another way of saying ‘Look at me, look at me, I’m better than you – I CAN DO IT!’ she is so resentful that she just couldn’t do it. That is a resentment I can not only understand but relate to.

Now I look back, I had such a chip on my shoulder when I would see breastfeeding mums. I would look and I would think, ‘Oh for goodness sake, I’m sooooo pleased I didn’t do that. I bet she’d judge me for feeding my baby formula… Well she can judge allll she likes, there’s nothing wrong with formula’. I’m not even kidding, I was that uptight about it. I couldn’t be more different now, yet at the time, the chip just grew and grew. I remember my mother-in-law sharing a pro-breastfeeding picture on Facebook, you will have seen it, three women in bikinis on the top half and three women feeding openly on the bottom, with the caption ‘If you don’t mind this, but you object to this, your a hypocrite’. I was sat with my husband when it came up on my newsfeed and I just rolled my eyes, ‘Ugh, look at this. Why is your mum sharing that anyway? She feeds Roo with the bottle… I don’t get it. No one cares if you breastfeed, stop shoving it in people’s faces.’

Yes, I actually said that. And, fellow breastfeeding mums, I’m really ashamed of myself for it. At the time, I would have told you that no one was bothered by public breastfeeding, it was all propaganda to shame formula mums. I became so negative – to be pro-breastfeeding was to be anti-formula feeding. If you were a breastfeeder, well, you were judging me weren’t you?!

I look back now and I was so sad that I couldn’t breastfeed, I became so resentful of anyone that could. I realise how incredibly immature and pathetic that is, I do, and I would probably think the author of this was just a spoilt brat if I wasn’t the author myself. Sometimes, when our hopes fall through, it takes time to come to terms with it, and we all handle things differently – I didn’t handle this one well at all. At the end of the day, the only one who was anti-formula was me, but I couldn’t see that because I’d convinced myself that I was delighted to be formula feeding Reuben. The colic wasn’t because of the formula, neither was the constipation, or the hard stools or the fact that he was such a chunky monkey… Nope, it would have been the same if he was breastfed.

Eventually I realised how I was behaving when I fell pregnant with Toby. I went to the midwifery appointment and my midwife asked me how I was planning to feed this baby. I said breastfeeding. Without a second thought, and I don’t know if it was the hormones or whether it was the build up of eleven months of feeling disappointed in myself, but I burst into tears and told her all my hopes and fears surrounding feeding, how I was so heartbroken and disappointed with not being able to feed. Katie Hopkins strikes me as the type of woman who can’t bare to be a failure at anything, but like me, she failed at breastfeeding. Is she still an asshole for the hatred she perpetuates against breastfeeding mothers? Completely, but now I get the why. She has that big ole chip on her shoulder. Judgement towards mothers of all kinds is rife, sadly it’s the society we live in, but if you are a formula feeding mummy, who really wanted to breastfeed but couldn’t or didn’t, and you are feeling those judgemental eyes from another mother, ask yourself, Am I being judged or am I judging myself?