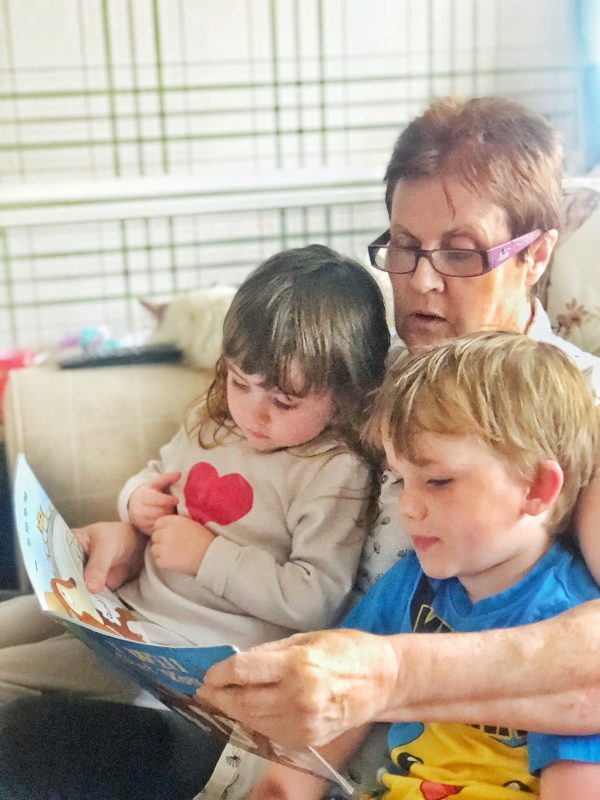 Bit of a hot topic this one isn’t it? It’s been on This Morning (which admittedly I don’t watch unless someone texts me with shouty capitals to say “PUT THIS ON NOW AND BLOG IT!”) and it is the conversation around Grandparents and their rights to see/have contact with their grandchildren… it’s a pretty divided topic.

In a nutshell, a couple are petitioning good ole Mrs May (that’s the Prime Minister for those, like my children, who don’t know… but they know who Trump is?!) because they want to change the law to ensure that Grandparents have legal rights to access their grandchildren, in a similar way to that of parents who have separated. Now, initially I was all “well, no, no one gets rights to my sprogs, I pushed them out of my bod, they are mine and everyone else can jump… surely no one cuts access to the grand parentals if they separate from their partners without good reason?” but they do and it’s not quite as black and white as that.

Both Adam and I agree that this whole “rights for Grandparents” thing isn’t something we would be happy to see happen – in my opinion, the only people who have rights to your children are you and your co-creator/parent. If you had a hand in making em, or in the case of adoption/same sex relationships, deciding to create the family you have, then you should have a right to access unless there is a VERY specific reason that you shouldn’t have it. I remember when my own parents spilt up, my mum did everything she could to ensure that my absentee, totally crappy dad (I’m over it, it’s cool… *awkward side eye for the daddy issue on the left) had as much access to me as possible. Sure, it was awkward and really fucking hard at times but she would drive me to Sheffield from our home near York, arrange weekends for me and it was only when I was old enough at around the age of 9 to say “fuck this” (obviously not in those words, that would have earned me a clip around the ear) and refuse to have continual contact after a spate of disappointments, relentless parental failures to come through on his part and a really god awful step mother. With my dads parents though, I saw them until the day they died and that was exclusively because of my mum – who was treated like a dog by my Grandma by the way. My mum did everything, and I mean everything, for them both and that included ensuring that I had a full and brilliant relationship with them both.

In my own experience I’m incredibly lucky, some would say #blessed, by the Grandparents that I have for my own children. My mum is my biggest idol – despite the fact that we fight like cat and dog and seldom get along as I get older – and I adore her with every fibre of my being, and in return she adores me and my children to a fault. The kids have the most magnificent bond with her, with Toby preferring to sneak into her room at night because he loves her so and the children feeling able to share everything with her at every turn. No matter how my relationship with her turned out to be, I would never EVER want to deny my kids that bond. Same goes for Adam’s parents who love our children unconditionally, always want to be there for them and take them on wonderful weekend trips that they get SO much out of. It would be irrelevant if I liked them or not, the fact remains that these three adults bring something wonderful to the table for our kids and having friend’s whose parents really couldn’t give a rats arse about their grandkids, who forget birthdays and who don’t bother to be around at all, favouring other grandchildren, I think you have to realise when you are lucky, and we are.

Does that mean that our parents have a right to our children? No. No it does not.

If we afford Grandparents rights, where does the buck stop? Do we afford it to Aunts, Uncles, Godparents… what if you have a toxic relative who you feel (bare in mind YOU have the right to make that decision) would undermine the parenting style that you have chosen – for example someone who you know has values that they would try to push on to your children like someone telling Toby he can’t wear pink or like singing in dress up because it’s for girls and it will make him gay (fortunately there is no one in our family like this). If this was the case for one of our relatives, I would want the right as their parent to cut that person out, to shield my children from their negativity. Have those views but don’t push them on my kids, you with me?

On another slant, what about moving away? If I want to move to Australia (I don’t) then I am sure as hell not going to consult other adults about whether or not I can do that. It would be a decision that Adam and I would make for OUR family, not extended family and their wants or wishes.

I can totally see a need to protect against people who cut out relatives out of spite, but if you have a toxic relationship with someone, the last thing you want is for your children to be around that person, or for you to have to be around them more than is required. Do they have a right to see YOUR children? In a nutshell, no. It’s harsh and it will mean that people who aren’t acting with their kid’s best interests at heart will slip through the cracks, but ultimately I am happier to see that happen than I am for a parent to be subjected to the whims of grandparents and/or other family.

I feel like opening up “Grandparent rights” is a can of worms that will be both messy and pointless – it’s a pathway to “I don’t like your parenting style, it’s my right as a grandparent to undermine it”. GFTO with that noise. I have said it once and I will type it out again, the only one with rights to my children is me and their co-creator/parent, Adam. The decisions around their welfare, the way they are raised and the frequency of their contact with other family members is really up to us.