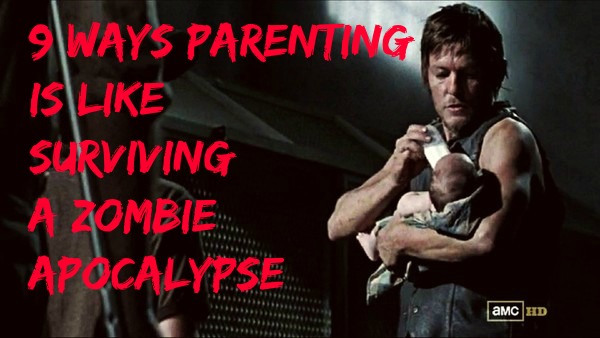 9 ways parenting is like surviving a zombie apocalypse, because, well it is. Truth.

You all know I’m a huge fan of The Walking Dead. It’s become a bit of an obsession to be honest (and that has NOTHING to do with Daryl, nothing, and any suggestions otherwise are slanderous…), I don’t really get to watch much TV, unless of course you count endless reruns of disney movies and tv shows, then I’m officially square eyed. With the return of The Walking Dead in October, I thought this might be the perfect time to point out exactly how much like the apocalyptic setting parenting actually is.

My love for the show started when I was permanently strapped to the sofa because Edith is a cluster feeder and would sit and feed for hours and hours, long after the kids had gone to bed or preschool and Adam had wandered off to bed or work. I was too tired to read my book, my eyes started to burn and I can only stomach so much late night tv before I feel like screaming, so I took up the chance to use our very expensive Sky feature and watch some ‘On Demand’ tv. That is when I came across this show and decided this was the series that me and Edie were going to get into while we burnt the midnight oil… then I started to notice a few things (worryingly) about the show that reminded me of my home life… in fact, it reminded me so much that I felt compelled to see if anyone else agrees – Does parenting resemble surviving a zombie apocalypse to anyone else? Here’s my reasoning:

1. It doesn’t matter how cute your baby is, when they root for a nipple (or teat) they look like a zombie trying to devour anything in it’s path. And they will devour that milk.

Is it just my kids? It doesn’t matter how sweet and innocent Edie looked, how adorable she was or how recently she had been fed, if you got a boob near her face it’s game on. She started to root and wriggle like a zombie in a rave, even her noises could be quite similar, that ‘I must feed now” grunt. Couple that with the fact that a really hungry baby will latch onto anything, and I mean anything that is put in there mouth – I’m just saying, it’s kind of disturbing and you can see where I’m getting this parallel, right?

2. Your house is in a permanent state of post-zombie-attack-post-looting trauma.

If you have young kids your house will look like a whole herd of zombies has trampled through, fought with a few stray survivors, wandered off again and then other survivors have come in to loot supplies. It is going to be messy. Permanently. If you think for one second that cleaning up the toys, biscuit crumbs, half eaten bits of toast and random clothes strewn over the floor is going to make any difference, then you my friend, are wrong. By the time you have done that, another room has been vandalised by your little clan and this time they probably had sharpies to the wall too…

3. You will suddenly have a startling resemblance to a zombie.

Honestly, between having zero time to myself – really, I can’t even pee on my own, I’ve no time for make up! – and having absolutely no sleep, this was one of the things that struck me the most as a parenting and zombie survivor similarity. I look like part of the cast of The Walking Dead, I’m not talking about the woeful survivors who still manage to have perfectly curled ‘on the run’ hair, I’m talking about the zombies. The only consolation is that I look like one of the zombies that is relatively well kept and fresh. Most days. Yay for me.

There are some uber gory moments in The Walking Dead, I mean, those zombies can feast, but I can honestly say that that stuff doesn’t bother me. I’m well prepared for it. In the last month I’ve had a small human squeeze out of my vagina, been pooped on, vomited on, snotted on and peed on countless times, not to mention, I’ve survived my first post birth poo. Literally nothing phases me. In the same way that a survivor becomes numb to the horrors around them, so have I!

5. You will look back at your life before kids in the same way survivors look back at the pre-apocalyse world… what’s a cinema again?

Whenever you watch a movie or tv programme about zombies, the main characters are always prone to a bit of pre-apocalyse reminiscing aren’t they? Do you remember when…? Wasn’t doing …. so much fun?

Does that sound familiar to you, because I have to tell you, it’s familiar to me! Countless times I will turn to my husband and say, ‘ Do you remember when we used to go out, like really out, without the kids, without it taking weeks of planning?’ Yeah, kids come into the world and like a little zombie herd, they take over and suddenly all those things you used to do are no more. The only thing I can see that is different between parents and the survivors of a zombie apocalypse in this scenario is that, most of the time, you don’t mind and wouldn’t change it.

6. Once the sun goes down, your house is suddenly a zone of silence. Anyone making a noise outside will be met with hostility.

The sun goes down, the kids go to bed, and everything becomes a zone of silence. Lights are switched out, you lead the way with your phone’s torch so that you don’t have to cause a potential disturbance. Any little creek of the floor boards is met with the same wince that you see on the face of every survivor in every zombie programme ever. Do. Not. Wake. The Sleepers.

7. A ‘supply’ run requires planning. Lots and lots of planning.

Going to the supermarket is something that most people just do, you might write a list of what you need, but you don’t have to plan like a parent or a zombie apocalypse survivor does. Oh no, we have to take changes of clothes, drinks, snacks… the list goes on to prepare for whatever could take place on this perilous run. And when you get to the supermarket, collecting the supplies takes work. You will have to get your young brood into the trolley, placate them with aforementioned snacks and drinks, prepare for unforeseen potty accidents… you get the picture. Not unlike a survivor, any ‘supply’ run is going to take up a good part of your day planning, and in the same way that they always forget their trust zombie killing gun for the moment they really need it, you will no doubt forget your purse.

8. Zombies always seem angry, but they don’t have shit on a toddler.

Does anyone else get the impression that zombies seem angry all the time, I mean, you can’t blame them – their situation is pretty abysmal. Let’s be fair, how do you make lemonade out of that particular lemon? The same thing can be said of a toddler whose favourite tv programme just finished or whose been told not to climb on the fire guard for the millionth time, getting them to see the good in something that has angered them is like trying to Nick Clegg to find his balls. It’s unlikely to happen. At least until they get to a reasonable age… or move out. Anger is an emotion that both parents and survivors have to endure.

9. No matter what, no matter how much you want to kill them yourself at times, you would always die for them.

This struck me, especially in the moments when I have been all touched out, not lowered my voice below a 10 point decibel all day and I just want some me time. No matter how much my kids drive me mad, I would die for them without a second thought. In the movies, the tv shows, the main characters often have to make a choice between themselves and their loved ones and they never, ever leave their children behind. They die for them, they run into unmentionable danger for them. That’s something we all have in common with the survivors of a zombie apocalypse.