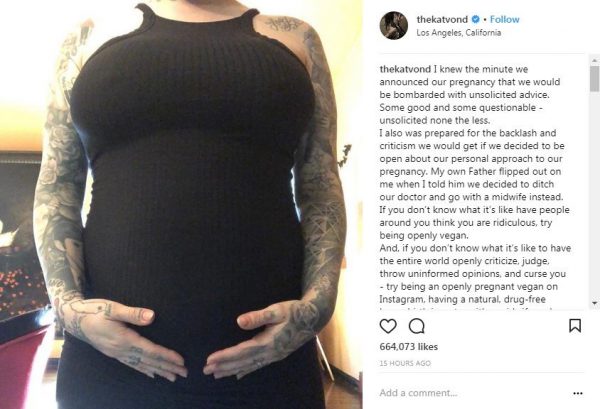 I try so hard to live my life with a “Live and let live” attitude, it’s kind of my “thing”. You do you bae and I will be up over here living my best life and doing me… until you doing you actively affects my best life, then I feel like I can’t keep quiet.

Last week Kat Von D (if you’re like my Mum – Kat Von D is a former TV star on Miami Ink and similar programs, and has a make up range which is, for all intents and purposes, brilliant and pricey) posted a post on Instagram about how you should choose your own paths in pregnancy, how you should do YOU and ignore the naysayers. I was right there fist pumping along with her post, I couldn’t understand why people were writing their own posts about it – she was right… you should ignore the unsolicited advice, you should live your life and raise your child how you choose unless it is a danger to them… and there is was: She was declaring herself as an anti-vaxxer and going to raise her child without vaccines in a natural way.

“And, if you don’t know what it’s like to have the entire world openly criticize, judge, throw uninformed opinions, and curse you – try being an openly pregnant vegan on Instagram, having a natural, drug-free home birth in water with a midwife and doula, who has the intention of raising a vegan child, without vaccinations.”

Raising your child as a vegan is your own business people – and FYI you can raise a child vegan and still have a healthy diet, even WHO has no issue with it – but what you can’t do is refuse to vaccinate your child because, well, plants. Fuck. That. Shit. Like I said, do your thang until you start endangering me and mine.

There is a reason that we have vaccines boys and girls, and I feel intensely passionate about those reasons – it’s so we don’t die. The majority of people reading this blog (according to my fancy google analytics tools that I can hardly use) are between the ages of 21-47 so still too young to recall the days when everyone knew someone who had lost a child to measles, mumps, rubella or polio. I’m too young to remember it (what a blessing that ignorance is) but my mum is not, at 67 she can name the children down her street that didn’t make it to adulthood, the man who had polio and ended up unable to work and with horrible deformities, the families who her mother took food to when they lost their children. Just let that sink in: so common was it that children died from these illnesses that simply down my mum’s street she can count multiple families who suffered loss. Yet here is someone with 7 million followers proudly declaring that she has the right to be different and go down her path of natural awesomeness, and actively encouraging them to choose their own paths too – to ignore the naysayers, you know the ones, they generally where lab coats or carry medical instruments.

These aren’t benign illnesses as some of the comments on Kat Von D’s post suggested, these are terrifying. There is no way that you will be treated in A&E with a plant based product if you have polio and frankly, if your child was dying from an illness, you wouldn’t want them treated with anything but the finest modern medicine that you could get – you would want them to live. As Tim Minchin said: You know what they call alternative medicine that has been proved to work? Medicine.

No, vaccines are not a safe fail proof against these illnesses, absolutely they aren’t – you can be vaccinated and still pick up a disease but it makes it so much harder for the diseases to stick around – hence the reason we have almost wiped out most of them… until recently. Even in our area there has been an outbreak of measles, something that was common when my mum was a child but now it’s a shock to hear that a child has it. Even more of a shock? The outbreak of Mumps in York university and college dorms – the most common place for this to spring up now, and it’s because people with the choice to not bother vaccinating their kids are opening the door for the diseases to waltz back in. Don’t you think that we as human beings have a duty to protect one another? PLAGUE is making a comeback because it’s become fashionable to not vaccinate and live the natural life. Plague, people.

Another common argument in the Kat Von D comments – if you vaccinate, surely you should be protected and it doesn’t matter to you? What about people that CAN’T vaccinate? Who have a genuine reason that they can’t vaccinate their kids? Don’t we, the rest of society, have a duty to protect them? This argument also forgets that viruses mutate, they develop and they get stronger – vaccines aren’t ever going to be 100% but if we ALL do this, all stick together… it’s not witchcraft, it’s science and common bloody sense.

As Caroline Hirons quite correctly said in her post: vaccinate your kids or keep them the hell away from mine. It’s not that simple though is it? Did you know that you don’t legally have to vaccinate your children in this country for them to attend school? WHY? We have the option of homeschooling so why is a child allowed in school if a parent wilfully chooses to endanger them and their classmates? Simply put: They shouldn’t be. If your child is not vaccinated because you have the absolute ignorance to make a choice that you know better than all modern science, all doctors, all researchers, then bluntly you and your child have no place in this society and homeschooling should be the only option available. I don’t want your child bringing something to school that could affect my child. I don’t want the little boy in school who couldn’t be vaccinated for genuine medical reasons to be more at risk because you’re a feckless moron who wants to treat lives with plants and crystals – your time has passed, back in the middle ages.

I remember a debate not so long ago over whether or not it should become law that a child has to be vaccinated in this country and that was deemed too much of a nanny state ideal, too dictator like because we have to allow our people the right of choice – but where does that leave people wanting the right to protect their children from blatant stupidity and a comeback of diseases? Where does that leave our herd immunity if a part of the herd can declare, nah, I’m good I’ll eat some kale and apply some tea tree oil to it, I’ll be fine.