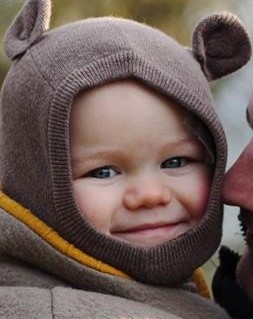 You can just see his little plaster on the right hand side.

As a mother, I think of it as my purpose to make sure that my boys make it through the day without too many bumps and scrapes… unfortunately a few days ago I failed at this task with such an epic magnitude it beggars belief!

Toby is so different to his brother at this stage, I literally cannot have a second to myself as he is into everything and climbing everywhere. He has even figured out how to climb onto the sofa, over the back and into the bay window. Why??

I was in the kitchen preparing dinner, everything was going well, the kids were in the playroom playing with their train track and then I heard the dreaded bang-followed-by-silence-followed-by-scream. I shot through to the playroom and found that Toby has climbed into Reuben’s armchair and tipped it over, falling straight into the wooden table and chair set in the corner of the room…

Of course at this point I picked him up to comfort him, and as I turned him around I was greeted with a massive cut across his brow and blood pouring! Naturally this was when I was alone in the house (these things don’t happen when there is an abundance of adult company, oh no that would be too simple), but fortunately the boys were both dressed and we had been out to play so had shoes on, so it was a case of dashing to the car and driving to our local hospital to get it looked at.

Cutting a long story short, my beautiful one year old has already had to have his forehead glued back together and is sporting a very unfashionable and embarrassing plaster and steri-strip combination that is essentially holding him together! Brilliant!

I wanted to post about this for one very simple reason… I feel like a terrible mother!

That feeling got me thinking, would I think this of another mother if this happened to her? No, I would think she has an active child and thats what kids do! We can’t protect them all the time! So why am I so hard on myself?

I think we are all so critical of ourselves, but we shouldn’t be! I wanted to share this experience with you so that when you are feeling like a terrible mother after that knock or scrape you couldn’t prevent (incidentally I was also cooking in the kitchen a few days before this, and no matter how many times I told Toby not to touch and moved him away, he eventually burnt himself on the oven door *groan*) and you are piling on the guilt because you didn’t save the day, I wanted you to know: Its ok! Its normal! Calm down super-woman, you’ll fix it all with your kisses and cuddles and possible some glue and medical attention from the local hospital staff….