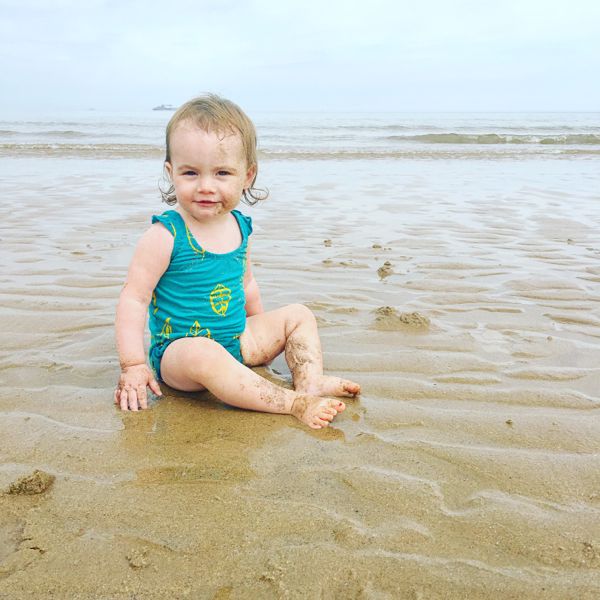 As I may have mentioned once or twice (OK, I know I’m harping on about it but it’s exciiiiting) that we are off on holiday in a few weeks. Well, as such, we’re starting to take advantage of the ever increasing sales items and get holiday ready. The kids, well they don’t really need clothes, but where is the fun I ask you, in being a parent if you don’t get to flamboyantly throw money around in order to buy cute stuff to dress your children up like dolls? Especially Edith, call me gender biased, but dressing her up in cute stuff is my thing. Seriously. I always loved clothes and dolls, and really what is a rabunctious 18 month old if not a walking, babbling, boob-demanding, screaming doll? The stuff dreams are made of for 7 year old me… Sort of.

Anyhoo, I found a VERY cute bikini online. For Edith.

When I was younger and a mother of boys, I was adamant that bikinis we’re totes not cool for babies and little girls – I’ll be taking that onesie thank you very much, there is no need for a bikini in this family. And then she arrived and got bigger and then I started to notice that baby and little girl’s bikinis are not the same as adult bikinis. Not even slightly.

They’re frilly and silly, cute and playful and never, ever, ever, I mean never, sexy. Ew. Then, can a bikini really be sexy unless we objectify and sexualise what is IN it. Take for example myself, a nearly 30 year old woman who has stretch marks (ahem, sorry, “tiger stripes” because apparently I should be proud of these hideous marks as I earned them – bugger off, you don’t “earn” stretch marks, you get em because you have skin that isn’t naturally elastic. Pftt.), dachshunds ears for boobs and a little more love handle than she would like. Am I inherently “sexy” to everyone? No. As a woman, am I sexualised? Yes. Is my body automatically open to speculation and if I wear a bikini am I “putting it on show” according to society? Sadly, yes. Now this might be dandy for some people and kudos to them, I have to say I’m not really fussed (#badfeminist) but ultimately I slotted into the auto-sexualised category because I’m female, however that doesn’t mean that my daughter would be, right? We don’t sexualise children, so what is sexual or “wrong” about a bikini? Nothing.

A bikini isn’t sexual, neither is lingerie (excluding that kinky shit – we all know that is sexual, crotch less panties are not for making it easy to piddle, though mothers have to admit that would be easy.. If not a touch embarrassing when the kids lift up whatever you’re wearing…) but as a society we do seem to have made it so, something we don’t do for trunks or speedo pants on boys, so, what’s the deal with a bikini and why are we auto-sexualising females?

What are your thoughts? To bikini or not to bikini?