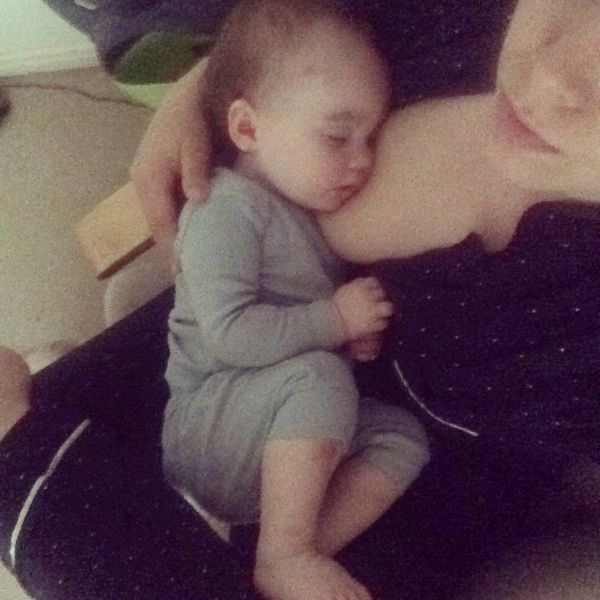 Late night boob feeds… they take a toll when she’s pinching and kicking.

I’ve always been a big advocate of breastfeeding. Or rather, I have since I could do it myself with Toby – when I struggled and couldn’t with Reuben I was rather devastated and as such I had a bit of a green eyed monster situation going on. Anyhoo, boobies are our thing nowadays, we have mucho love for the boobs, with absolutely no one in the house batting an eye lid when Edie stamps her foot and I pop one out like one would grab a chocolate bar at a petrol station.

I had planned to feed Edie as long as she wanted really, giving her free reign to self wean in the way that Toby did at about 11 months, however it would appear that Edith’s connection to my now demolished boobs is significantly stronger than her brother’s was. In fact, I’m pretty confident she will never stop, and as she flutters between being a boob-grabbing, pinching and squeezing demon and a sweet child who nurses like an angel, I’m beginning to wonder how much more I can take.

I don’t know if it’s a latch thing, but lately breastfeeding Edie is no fun. In fact it has become rather uncomfortable, I can feel her teeth, she pinches me constantly and she is not shy in her persistent pummelling of my tummy like a kitten about to bed down.

I never really wanted to think about weaning her, or find breastfeeding to be a burden. I’ve, excluding the sleepless nights and continual demands that can only be met by me, enjoyed breastfeeding. I’ve relished the bond that we have created and the quiet moments when I can hold her close and we have something special, just us two. It’s a rarity to have something that is completely special for you and one child when you’re a mother of three. So much is shared, so much is spread too thinly. But not breastfeeding.

There have been instances where I have resented breastfeeding. I very clearly remember we had booked a night out, Adam, myself and another couple, but with Edie only being 6 weeks old I could go. I was gutted and I did resent it (I resented him far more for leaving me behind while he swanned off in his usual “having-children-changes-my-life-in-exactly-zero-ways” form, but that’s another story…). I resented being the only one that she could feed from, but as I was putting her down for her first block of two hours sleep that night, I could help but feel overwhelmed with love for her, and any worries about missing out faded into the background ready to be lobbed at Adam in the morning like Russian missiles.

Present day and even those blissful moments aren’t so sweet anymore. She has just sat on my lap a few minutes ago as I type and started smacking my chest while squealing like a very angry, very stuck piglet… She isn’t hungry, she doesn’t need a feed. Yet here we are.

I guess what I’m saying is… I’m thinking about weaning Edith. I’m thinking about telling her no more and powering through for a week or two of persistent demands and extra cuddles. I’m not sure whether it would be the right thing to do or not, but I don’t think myself or my poor battered boobs are willing to take much more.

When did your little ones stop breastfeeding?