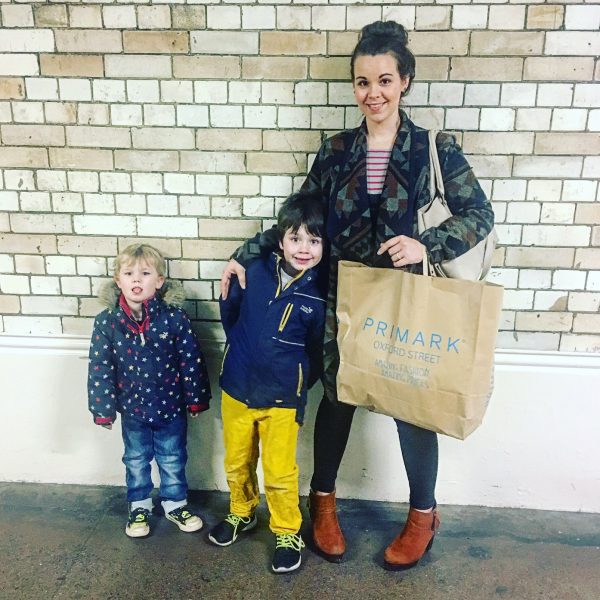 I have never really been one to shop with kids, I mean, who wants to do that? If you could write a list of things that I DON’T want to do, shopping with a rough and tumble 5 year old, slightly unhinged 4 year old and plain grumpy 1 year old is pretty high up. Sometimes though, there are no other options is you want to squeeze in some family time on a weekend and actually buy a present without resorting to the internet (which in our house is also nigh impossible to get on without someone – looking at you Edie Rose – trying to hoick a nipple out of my bra for some grub.)

A few weekends ago Primark asked me to come down to their new look Oxford Street store to have a look at how they had made it just that bit easier to shop with kids, and I have to say I was pleasantly surprised. When I first got the email my insides curdled slightly at the thought of taking the kids daaannn Laaaandan way, it would be the first time they had been in London for anything other than a flight and the idea of taking them shopping in something that ISN’T a toy shop was blood curdling, but I put my big girl pants on and agreed. I could do this, right?

Turns out I was right. Not only could I do this but it was a fairly enjoyable experience (with a few blips like Toby announcing he was “just doing a wee up the wall of The Natural History Museum before we managed to persuade him to stow it away until we ran inside like we were carrying a nuke). Primark have made their new store big, more spacious, with better changing rooms, more check outs to speed you through and even a café upstairs. To be fair I expected to have to queue for a time because, erm Primark – the hub of the hottest fashions at the most ridiculously affordable prices – on a Saturday afternoon in London, but there was no queue really and that meant the kids didn’t trip anyone up as we waited to be called forward by the usual sullen teenager working these day shifts. Mummy for the win.

So now that I’ve had this shiny and surprisingly undramatic experience, what are my tips for shopping with kids?

This will always be my first tip. Always. Sorry, not sorry. Shopping is boring – if you can avoid taking the kids DO IT. Unless it is a simple and easy shop if you have another option, use it and feel exactly zero guilt about that. Really. There is no shame in saying to Grandparents, godparents or family that you want to go shopping and leaving the kids behind.

I find phrases like “If you just give me 10 minutes to try this dress on, I will let you have a Kinder Egg” are golden. I honestly don’t think you can bribe enough – though threats I find work less (see “I will call Santa” under this bracket) as it just seems to inspire a whiney nose that makes you, and most likely the other shoppers, want to peel your ears off like a cheese string.

Be it allowing the child to ride on your shoulders mini dictator style or pretending to be a super spy or, dare I say it, using a tablet or your phone, let them stay entertained. A bored child is a badly behaved children, which is a grouchy parent. I think the thing with shopping is that easy peasy tools like colouring and sticker books (which we used on the train) aren’t suitable, so it’s really up to you to find something else that can be done on the move. Primark actually made life so much easier because the store features Wifi, so the kids were on youtube benders from the start.

My favourite thing about the new Primark layout was the café. I never take the kids out with me without securing a.) snacks and b.) a place to top up snacks once they have eaten all of the things I’ve provided – which is usually in the first 2.4 minutes of arrival. “MMmuuummmmm, I’m hungryyyyyy/thirstyyyyyy/boreedddddd” are common phrases in our life so I always try to find the nearest place to grab a coffee, let the boys look at their Pokémon on my phone and replenish with a drink and a brownie for good behaviour. The fact that I didn’t have to leave the shop OR my shopping was awesome. Massive brownie points for a store that accommodates the brownie pit stop.

I am outnumbered 3 to one with my kiddos. Three to one people. If you simple must go shopping, but are aware that your kids are going to be hellions then don’t try to force doing it alone. Go with a friend or family member (we dragged Daddy down to London as we were shopping for other family members) and take it in turns to have a look or try things on while the other entertains the kids. I find my kids are worse when they are all together. Quite honestly Toby is probably the best shopping companion I’ve ever had, he loves looking at shoes and women’s accessories, but put him with Reuben and they feed off each other. Just having that extra adult to bark “DON’T DO THAT” as they are about to terrify some random person by jumping out from in between the clothing rack is golden.

I’m guilty of this. My mum hates shopping with me with the kids because my expectations are over in LalaLand, while reality is firmly in place here. I expect that I should be able to shop for 6 hours with a few pit stops for a drink, a lunch break and the odd kinder egg slyly slipped their way. This just isn’t going to happen. It’s not. Shopping is boring and tiring so be realistic and cut the kids some slack. Don’t over do it – 2 hours is pretty much your limit and even that is pushing it.

We told the boys that we were doing a shop in Primark for mummy’s work, to buy some gifts for people and then we would take them to a magical place called the Natural History Museum where there were real dinosaurs, real animals and all sorts of cool things. They did keep asking “can we go now?” but they had something to anticipate and look forward to IF they were well behaved. In short, it goes back to bribery, but this way I find that you end the shopping trip on a high and only vaguely remember the bad stuff like Toby knee sliding into a rack of clothing and smacking his head on a rail. So vaguely.

What are your tips?