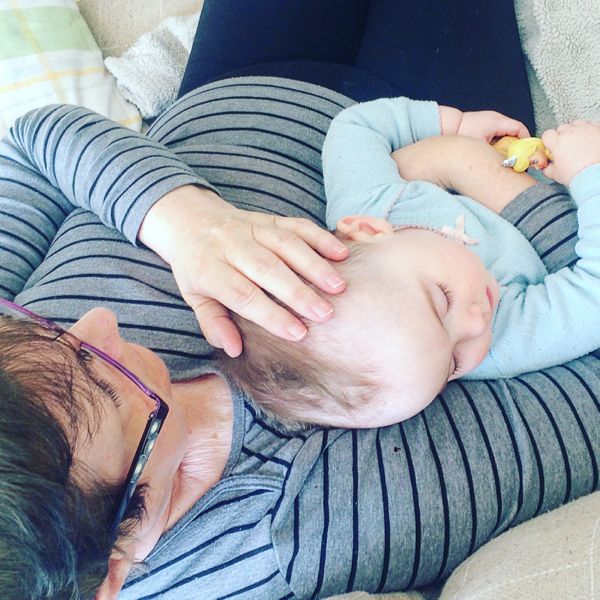 My mum with Edie earlier this week.

While we were away there was a fake news story that broke about in famous chat show host, Oprah Winfrey, expecting a baby at the age of 61. As soon as Adam mentioned it had come from twitter it didn’t take very long to figure out that it was a click bait story from a satirical new website – let’s be honest, if Oprah were really pregnant then we would have heard it from her social account managers in an official statement before the sensational “Oprah Winfrey pregnant!” headlines could be published.

It did get me thinking though, what’s wrong with her being pregnant at 61, even though we know she’s not? What would the issue be?

I wasn’t too sure about this topic – Adam was very much of the opinion that it would be fair play to her, if that is what she chose and she could get pregnant at that age (or use a different means) then she should crack on. If it is her dream to be a parent then what should stop her? And I agreed to an extent but something niggled in the back of my mind.

I try to be a really live and let live kind of gal, I mean, its your life so as long as it doesn’t affect me or mine, what is it to do with me? I usually wouldn’t think too much about an older woman being pregnant, my mum was 40 exactly when she had me and though she was classed as a geriatric by the maternity services, she was by no means old, nor was she ever an “old” mum. Some of my fondest memories are of me and her roller blading around the kitchen island when I was about 7/8 singing into broom sticks… it’s only now that she has fessed up she was bloody terrified of falling over because she was have done some damage (or so she feels). That being said, something sticks in me at the thought of a mum being in her 60s when the baby is born, and I think it’s because of how close I am to my own mother.

I’m 26 now and I can’t imagine my life without my mum – I truly can’t, I am far far too young (in my mind) to spend the following years without her guidance and love supporting me and helping me grow into an adult because god knows, despite 3 kids, a husband and a mortgage, I don’t think I’m quite there yet. I don’t have my dad around, he was never there anyway but did pass away when I was 16, so I would be without any parent in my life. No imagine my mum had fallen pregnant at 61, that would make her 87 now. Statistically, the average mortality rate for a woman used to be 89, though has now grown to 92. That means I would have (on average) just 31 short years with my mum. Considering the average age now for a woman to have a child has increased to 30, she might not even see my children, and certainly wouldn’t see them flourish into adults.

When I mentioned this to Adam he made a very valid point – anyone, anywhere can die at any time. I’d never really thought of that. It’s true though isn’t it? I could leave behind my children at the tender ages of 13 months, 3 and 4 years old tomorrow in a freak accident or due to illness, so does that change my thoughts on pregnancy much later in life? I guess it does.

I already know from my own experience with my mum having me at 40 (which society would deem “later life” at the time) that you really are only as old as you feel. Mum was never afraid to do things with me, never too tired, never too slow. Quite the opposite in fact, I look back now and I feel that if anything those extra years were a blessing to us because she was so strong and confident in her own character and person that it really taught me to be who I am today and taught me that you can handle anything life throws at you. not to mention the abundance of patience that she had – something I lack in droves.

There is no doubting that older mothers receive a bucket load of judgement for their choices, yet everything I have mentioned above could be applicable to fathers too and you rarely hear anything about older fathers and their abilities or whether it is right or wrong. I guess the whole topic (as fake and silly as it was) got me thinking and has changed my initial reaction – I feel I was wrong to think it was “too old” and I think no one has the right to judge that anymore, especially not on the flimsy arguments of “what if you die” or “you can’t keep up”.

So what do you think? Is the hypothetical Oprah Winfrey pregnancy a negative thing, or if Oprah (or anyone else) wanted to start a family at 61, should there be total acceptance from society as opposed to the judgement that they currently face?