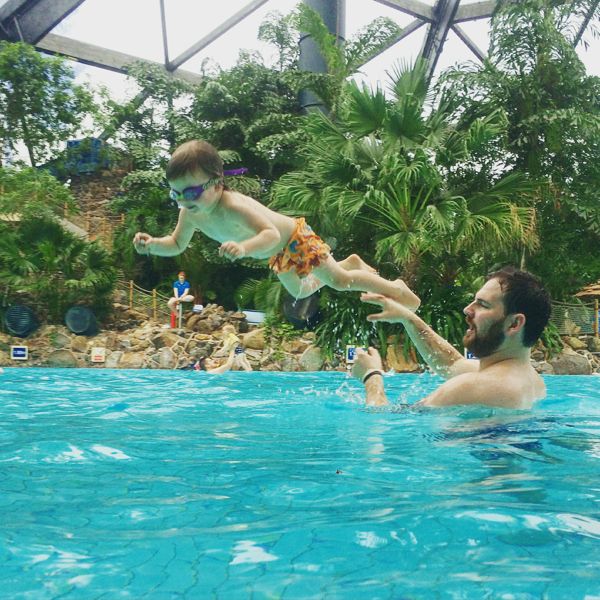 Daddy throwing Toby… this was one of the lower throws. I shit you not.

After our little trip to Center Parcs last week I’ve been sharing pictures of the kids and their fun in the pool on my social. I’ve had a few comments and emails from people asking me advice on how to boost your child’s water confidence (incidentally we had a few comments from people while we were there – especially with Edie in the big pool and not batting an eyelid when we put her on the ledge to hold on and take the above photo) so I thought it might be useful to write about it here. 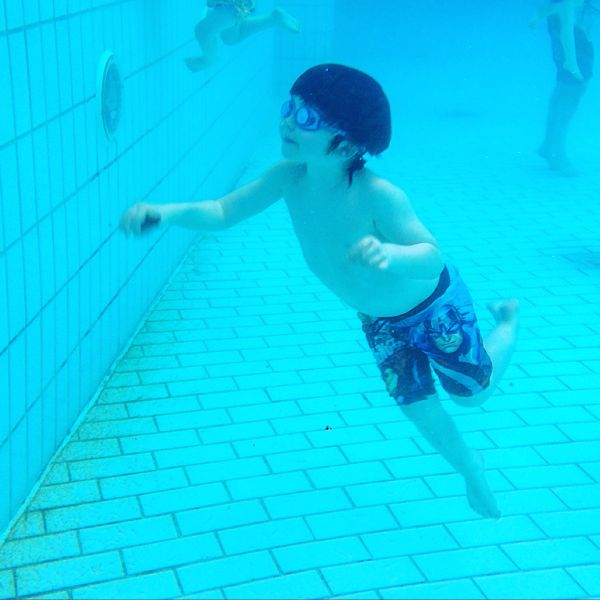 Using my underwater iPhone case, Roo was so proud of his diving ability this time around. 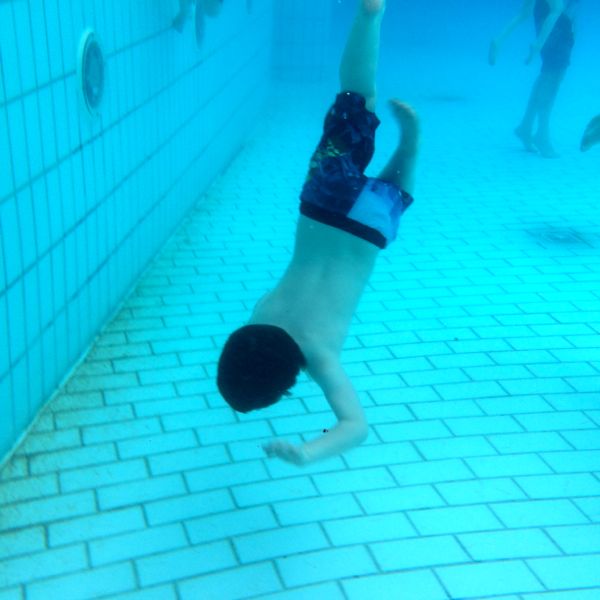 We use little dive sticks, Neil the seal rings or toys for the boys to dive and get – it’s one of their favourite things to do, but always seems to inspire a mix of awe and horror from passersby!

I can’t take credit for the kids water confidence, I really can’t. We have been swimming with Water Babies North Yorkshire (who I am a brand rep for) since they were tiny and the credit for their water confidence rests firmly on the shoulders of Stella and her team. Reuben started swimming when he was 8 weeks old – it was a programme that I had seen and heard about whilst working for Mothercare when I was pregnant with him and I booked him on the course before he was even here! We instantly loved it, it was evident from the start that it was his “thing” but not for every baby. Gentle perseverance and a lot of smiles and cuddles, plus confidence and positivity from the parent swimming with the little one soon brought the little ones around. Roo swam with Stella for a total of 4 years, at which point he left Water Babies to move on to swimming without me in the pool with him. Despite friend’s who told us that their kids could do the same and had never had to “fork out” for baby swimming, he soon proved everyone wrong and joined in the class (after much pushing from me because most swim classes are done on age not ability) with a group of 6-7 year olds. What we figured out when we went swimming this time at Center Parcs is that Roo can now swim a full length of the pool without aids. He can dive, he can climb out safely and he shows us each time that we can rest assured that he is safe in the water. 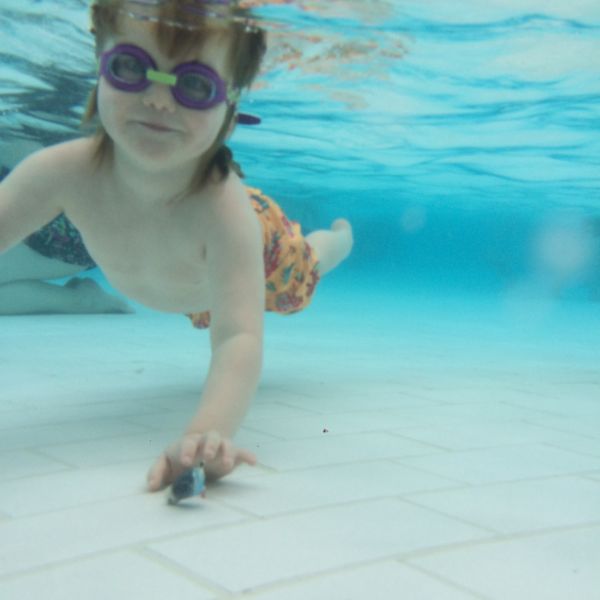 Toby started a bit later at 16 weeks and is still in the program, enjoying a mid saturday afternoon class with Stella. He has come on in leaps and bounds (despite water wobbles, which are very common, late last year) and his technique improves weekly. Toby doesn’t seem to be quite as much of a natural as Roo was at swimming, but he enjoys the classes so much. He is a dab hand at arm technique and when we went to Center Parcs we discovered that he can also swim to safety from the middle of the pool and (though not quite a full length) can swim a very impressive distance at 3 years old. Like Reuben he likes to be under the water more than above it, which often leads to amused comments from others – he really is a little fish at heart. 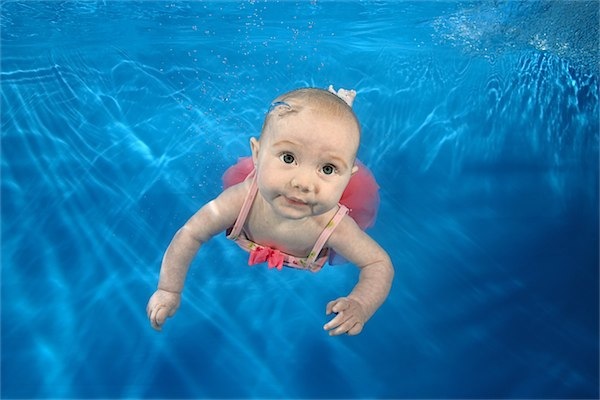 Lastly, Edie, who out of all of my children seems to have been the least “natural” and doesn’t actually like being underwater all that much. We don’t force it, no Water Babies class ever would and her teacher Amelia is wonderful at putting her at ease, making her smile and knows whether or not the little ones are happy to go under the water or not. Sometimes not, and thats ok. Edie doesn’t get upset at going under, quite the opposite and at 13 months she can kick her way to the surface, hold on to the side and wait for help. 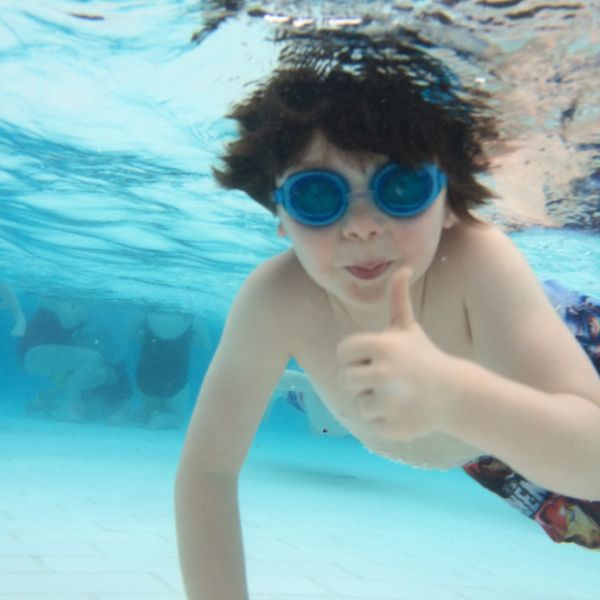 For us, water confidence has been built over years of showing the children that water isn’t something to be feared and going under isn’t a big deal. I personally hate being under water and have to hold my nose each time, so it hasn’t come from my ability to show them how fun that is! I do have a few tips that I have picked up along the way though: 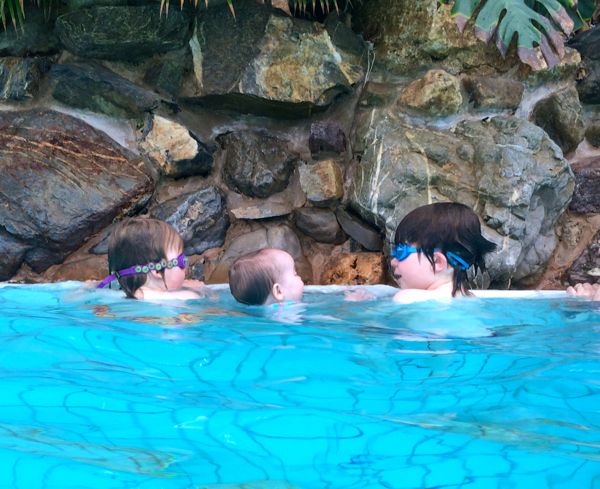 Three ages, three stages and a bucket full of confidence!

Those really are my only tips, do you have any others? What do your kids think to swimming?