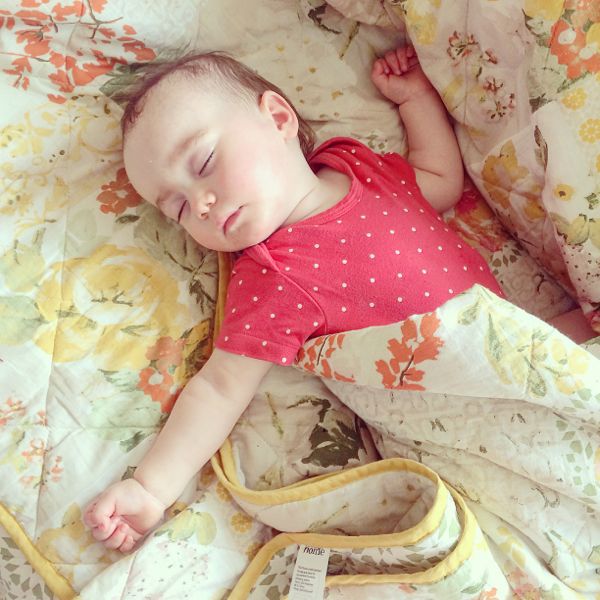 As I sit down to type this afternoon, I feel a bit silly that I’m talking about a pregnancy “scare” as a 26 year old mother of three who is in a perfectly “able” position to have a baby. Yet here I am.

Last week I was feeling a bit off, it could be that Edie’s sleep pattern was up and down (she slept through twice and then had random feeds other nights – still excited about the sleeping through though, even if it comes at the cost of a 5am wake up call!) or it could be that I was working my ass off all week, most nights until 11pm/12am which is super late for me and something I find oh-so tiring. Anyway, I was feeling dizzy, queasy and I want to eat alllllllll the food. All of it. This could also be a result of my renovated low-carb diet, but hey, it’s necessary.

On Wednesday Adam was watching me carefully in the kitchen while I prepared dinner and generally moaned about how rubbish I was feeling. For the third time that week he came out with the comment, “Are you sure you’re not pregnant?” and I had just about had enough on it, so I decided to do a test. I always have tests in the house. I could keep these guys in business with my buying of tests but after 6 years of constant pregnancy-baby-baby-pregnancy I have become rather determined to check on these things. Off I tootled to the toilet to, you know, do my thing. While I was in there a notification popped up on my phone to tell me a reader had left a rather snide and ridiculous comment on a photo I’d posted of Edie, so down went the test and I became absorbed in fighting my corner. About 5 minutes later I remembered there was a purpose to this toilet trip and grabbed up the test with a triumphant ‘There!” bubbling on my lips until… holy fuck, is that a line?

Que the angling of the test every which way, mucho squinting and neck craning. Before I had chance to make my mind up over whether this was in fact the world’s faintest positive pregnancy test, Adam waltzes in, takes one look at my face, then my hand, then my face and pales considerably. Turns out he could see a super faint line too. Shit.

I’ll be honest, at this point I was horrified and that shocks me to the core. I have always expressed the desire for a big family, I’m talking minimum of 5 kids. Adam hasn’t, he wanted to stop at two and has been requesting a vasectomy (so he says…) since I found out we were expecting Edie. It’s always left us at a bit of an impasse really, something that can get quite heated but of late we seem to have been on the same page.

Like I mentioned, some days I’m working until 11pm/12am and then I’m up at 5am – I’m working HARD to try and grow my blog and turn it into something I feel I can be really proud of, all at the same time as juggling a household, school runs, Toby’s foul toddler temper tantrums and my little demand-o-saurus, Edith. We haven’t really give it much thought, which is super irresponsible of us but with both of the boys we (read I) wasn’t really bothered if I got pregnant again – I was quite hoping I would actually. This time I thought I felt that way again, until Edith really started to come into her own and develop her… let’s call it a personality! I’m still breastfeeding so my contraception options are limited, I had a coil when I was younger and it didn’t agree with me, and I’m so bloody forgetful, with just too much to fit in my head already that I would most likely forget the pill and as it’s the progesterone only pill it needs to be taken within a few hours of each day. So, that leaves condoms and family planning.

Let’s put it bluntly, we don’t have time to have sex most days, so when we do get those precious 3.2 minutes of parent sex time (you know the one, where they are comfortably watching a TV show, you look at each other and realise you *might* just be able to squeeze in a quickie), we aren’t going to spend 2 of them running for and/or hunting for a condom are we? So, hello family planning. Thing is – family planning CAN be effective if you stick to it, but we don’t really stick to it *that* well. I know, I’m kicking myself and no one is more shocked at our stupidity than me. I just didn’t think I would feel the horror I did at the thought of being pregnant, I genuinely didn’t.

That being said, I have come to the conclusion that throwing another baby into the mix at this moment in time would be… horrible. I couldn’t cope. I can see it being a really, REALLY slippery slope toward severe PND.

Fortunately, my little story culminates in me running down to the shop to grab a digital pregnancy test and enjoying sweet relief as the words “not pregnant” flashed up.

If I’m truthful I’ve spent quite a lot of time wondering what I would have done had I been in the position of deciding whether or not to bring a baby into our family, and the decision I came to was not one I ever want to be in the position of making. Family planning isn’t enough for us anymore because I genuinely 100% do not want another baby right now, which leaves me feeling surprised and a little sad that my views have changed so much.