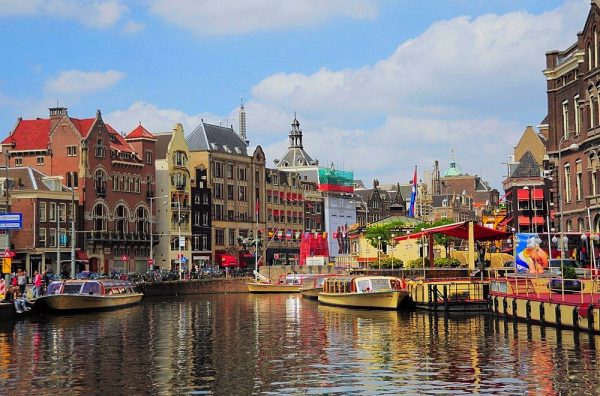 Did I mention that it was my birthday last week? Probably not on here but it was and Adam out did himself this year by organising a mini break to Amsterdam. I’ve been telling him that I would like to have a mini break for YEARS and it’s never quite transpired so this year I am buzzing to be heading to Amsterdam. I’ve never been to the city before other than for an airport stop over (and everyone of you who has done that stop over will be able to join me in the knowledge of the absolute PITA it is).

I have been researching and asking Instagram (the new google) where we should go and what we should book and the results are IN. I’ve started booking things now to avoid missing out as we go at the end of Feb, but I’m already so excited so I thought I would share with you my 5 things to do in Amsterdam. Once we’ve been I will follow up with what we actually did, my thoughts on it and what happened on the trip!

It was pretty obvious that this would be top of the list isn’t it? When you think Amsterdam you think of Anne Frank and the diaries she wrote from that little house. For us this is an absolute must. I have a fascination with history and I can’t wait to see this part of it, despite knowing how truly sad it is. I have booked on the website which was recommended to me and is actually a must at the moment according to the site.

The canals of Amsterdam are a pretty huge part of it are they not? So there are loads of different cruises you can do up and down the canals. From evening dinner by candle light to your cruises that take you to other attractions. It’s a bit like a Thames cruise I guess, but not in our county so automatically cooler instantly right? We’re booking the light festival hour cruise because that is happening during our time there.

I don’t think you have to be a massive fan of Van Gogh art to want to go to this museum, it sounds day and everyone has recommended it. It was one of the places that Adam also said he would like to go to and that we both instantly knew would be a must.

Yup, we’re going here. I suppose it’s more of a bizarre fascination with the district than anything else. I’ve been forewarned by my friend Katy from Katy Kicker that whilst a peep show might sound like innocent fun, it’s a BAD idea because some of them are genuinely grim. I want to see what it is that makes Amsterdam so … unbritish and so open about sex – also, is it all women? Another example of misogyny or is it more balanced?

You must book for this, I went to book and we’re so lucky that we are there during the week because even then It was getting busy. Weekends were all booked up at the beginning of Jan for a lot of Feb during the really peak hours so it’s crucial you book. It’s basically a really cool bar made of ice! It’s come highly recommended, as had the rooftop swing but I don’t think we’re going to make it to that one.