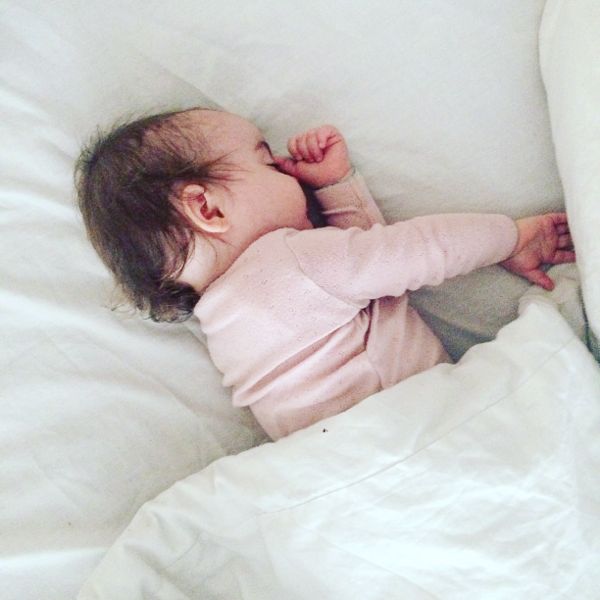 This is a picture I took of Edie having a lie in last week – she had been up for three hours in the night. Three. Hours.

It’s 1.58am. I have now been awake with Edith for over an hour in a little something I like to call the “mummy-I-know-you’re-there-and-won’t-sleep” initiative. Yesterday I was at a conference all day, I set off at 7am and didn’t get home until gone 8pm, which basically meant that I got up with Miss grumpy but I didn’t see her all day or put her to bed. You know what happened? Fuck all. She didn’t bat an eyelid and what’s more she was an angel for her Maw Maw at bedtime. On top of that because she assumed I wasn’t here she slept through. In 15m the only time she has ever slept through is for my mum or if she has been under the impression that I am not here. The rest of the time she is up and down like a yoyo on steroids.

So, back to now. She woke up at 12.40 for a feed, which I obliged. I always do. This time however, the same as it has been every time the night after my absence, she won’t go back to sleep. So here I am, exhausted from a packed day yesterday, knowing full well this will last for hours and I’m up with the boys plus trying to grasp those creative juices that are supposed to flow the days following a conference, and she just won’t sleep.

This is the first time in her tiny life I have really lost my patience with her and decided to try a mix of leaving her to cry, lying her back in bed and ignoring her totally. I guess you would called it controlled crying… After a good hour of feeding her – boob feeds she didn’t really want that mean she has been biting, pinching and generally being a nightmare – I lay her back in bed, kissed her and walked away. 2 minutes later I’ve done the same, then 5 minutes later and I’m currently lying here writing this listening to her shrieking at the top of her little lungs in what can only be described as the song of the furious. She’s irate. She’s not slowing down or chilling out, but she is giving me a headache and I fear we’re about 2.4 minutes away from the boys waking up.

So what to do? Pick her up and sit with her for another 2 hours like I did before when Adam and I went to London? Leave the house every night between 5 and 6, returning only after she has one to sleep in the hope that she thinks I’ve taken a night job?

The answer is I haven’t a clue. I’m too tired to make a plan and I can hear the floor boards creaking in the boys bedrooms… Wish me luck.

So, I’m up this morning (obvs) and Edie is all sweetness and light. She FINALLY went to sleep at 2.22am. The last time I went in to her was at 2.16am. Yes, there were tears, but I can honestly say that I don’t believe she went to sleep because she felt abandoned. Edith is now 15 months old, studies show that babies under the age of 6 months suffer with abandonment fears when they are left to cry it out, but it becomes less so as they become more aware. I’m not promoting any method of controlled crying or CIO (cry it out) though neither am I judging or dismissing it at this point because to know that this exhaustion is only an issue because my daughter *knows* I’m in the house and will come to her is really frustrating.

In short, Edie isn’t hurt, depressed or extra clingy – she couldn’t give a shit. I, on the other hand, am still exhausted but hoping we’ve made a step in a better direction.