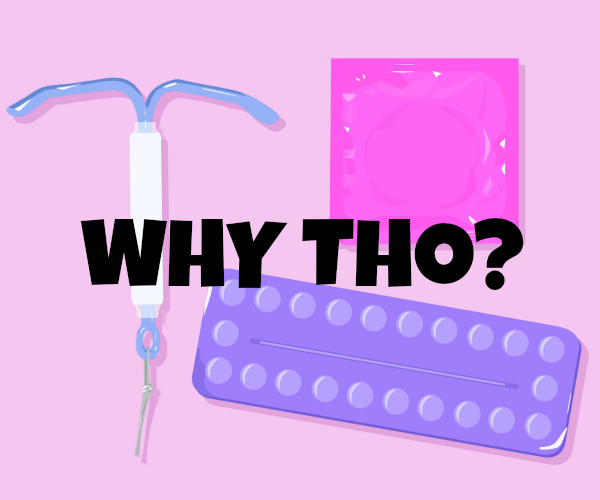 Can we talk about something that has been bothering me for a while? Cool.

The average man can impregnate an infinite amount of women in a year and yet a woman can only get pregnant and have a single baby in a year. Maybe pregnant twice if she really goes for it but she’s only going to complete the process once, whereas Mr Sperm over there is knocking up women left, right and centre but the onus for contraception is on the woman.

It’s ALWAYS on the woman.

Hands up how many women gave birth and were given the leaflet about contraception on their way out of the door? *raises angry hand and takes in sea of hands waiving there fucking stupid leaflets*

How many women had their partner asked about contraception as they left the Ward? Oh would ya look at that sea of tumbleweed. Fuck me sideways, that’s a shock.

It didn’t just stop as we left the ward, no, I was asked repeatedly at various stages how I planned to avoid getting pregnant and not once, not a single time, was Adam asked how exactly he intended to keep his little swimmers in check. I’ll give you ten guesses as to who was more excited at the prospect of getting a leg over. Small hint: it wasn’t the person who just squeezed a small HUMAN out of the carnival zone. No no, it was the one who didn’t have a muslin square across a shoulder, leaky, cracked nipples and a bloody contraceptive leaflet in hand.

Despite just having been through birth, assuring the hospital, GP and every Tom, Dick(head) and Harry that wanted to discuss how I was going to stop my husband getting me pregnant, no one ever suggested that he take a moment to think about how he was going to avoid the little swimmers causing the apparent issue we were all trying to avoid.

Abstinence was snickered at because, (and I’m not joking) “your husband will probably want to be intimate at some stage and I’m sure you will too” – thank goodness I finally came round in that scenario, I mean, if the male of the household wants it, I better crack on, yes? –  and when we went together to talk about Adam having a vasectomy, the response was “hmm, have you considered the coil?” Well, I didn’t know that they could fit a MALE coil buddy, cheers for that breakthrough. Not only that, a vasectomy is so final, it’s so DONE and, frankly, was he ready for that? The answer to that question if you want to know is, yes, my husband was ready for being “done” before we had Edith – it was me that pushed and nagged for a third baby, it was me that had an abortion to avoid having the fourth baby that none of us wanted when my progesterone pill failed. It is also me that occasionally gets broody now and is told “NEVEERRRRRR” by him, but hey, it’s too “final” to actually do anything about it.

Why, oh why, is contraception the woman’s responsibility? Why? Why is a male pill deemed unsuitable because it caused headaches but I’m at higher risk of pulmonary embolisms because I’ve taken the pill and my mum had one as a young woman. Why are condoms not “fun” so it’s expected that a woman should have an IUD or a small plastic thing inserted in her cervix? You know what sounded like a tonne of fun after I gave birth to Edith? Having a piece of plastic shoved into my cervix OR taking even more hormones to play fight with the ones that were already kicking my arse.

It’s not just medical professionals and “well meaning” friends and family either, Adam is just as bad.

I have given birth to three children, had one miscarriage, had an abortion AND had a plethora of contraceptives including: a mirena coil (current), three diﬀerent types of pills which have made me gain weight, have PMS style symptoms and brought me out in terrible spots and my personal favourite: the copper coil which gave me continual thrush after causing an imbalance in my body that made me ill, made me anaemic and depressed.

Yet ask a man to go and have a snip to a part of his balls when HE is the one who doesn’t want anymore children and he has a wonderful world of excuses that are more fucking technicoloured than Joseph’s sodding coat. I think the final straw came when his response was “Why don’t you have your tubes tied?” – well how about because mine is pretty huge surgery in comparison to yours and I THINK I’VE DONE MY FAIR SHARE YOU ABSOLUTE COCKWOMBLE. You’re scared of a snip down there? Fear not, I can tell you what it feels like because I’ve had three snips BIRTHING YOUR CHILDREN.

That being said, I have absolutely no right to force another person to have a surgical procedure, it is his body and entirely HIS choice, something I’m really firm on. The predominant issue here is that there is NOTHING available for men other than using a condom, crossing their fingers or having the snip. This is a societal issue and a really huge one that we simply don’t address. We’ve discussed this (read: argued over) at length, let’s be honest, as a woman it’s incredibly frustrating and Adam has put across that from a man’s point of view, it’s frustrating too. Surely it should be on both parties – I take something, you take something and everyone is a baby-free winner? Yet, of course, it’s not.

Contraception is just another way in which society treats women as inferior and there for the enjoyment of men. As men are the ones that can create the most pregnancies, the logic is surely that something to prevent that would start with them and then we would be developing things for women as a secondary? More to the point, you hear the jokes that are chucked about a dingy pub post-footy to the young lads who are heading out for the evening on wild adventures in the hope of securing a shag, the laughter of “wrap it up lad, you don’t want to get her up the duff” – surely these men want something that is going to be safer for them so they don’t “get her up the duff”.

Finally, the average woman spends the better part of £10 every time she wants to get her pill, yet earns less than the average male on an annual basis because of the gender pay gap. So, in summary, she’s fucked – literally, financially and medically because men don’t take responsibility for contraception. YAY for women.

I have reached a point now where I’m sick of hearing “why don’t you try..” in response to being fed up about contraception and us not wanting any more children. I’ve reached a point where I’m done with a society that doesn’t want to acknowledge that we’re doing it all wrong and that for every female contraceptive there needs to be a male alternative too.

So what’s up with that?