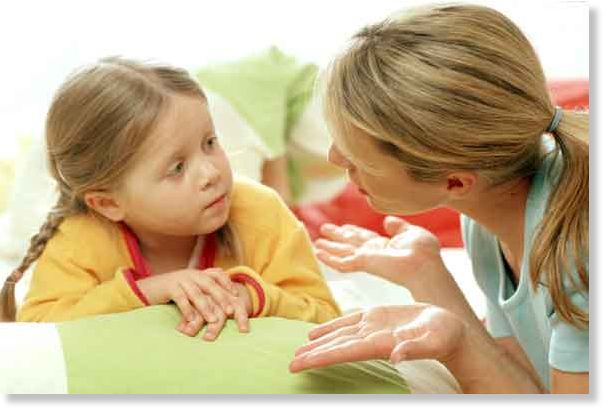 How host are you with your kids? Do you have a ‘no topic is out of bounds’ policy like I do, or do you cringe at the thought of those awkward topics?

This is something that I really feel quite passionately about: How honest should we be with our children?

This cropped up the other day when I was having a chat with some friends and we were discussing our kids and awkward conversations. One of the girls said to me that this time Reuben might start asking some funny questions about the baby and how did it get in my tummy, to which we all had a laugh and then one friend said I had best plan my response now. Needless to say, it came as a bit of a shock to everyone when I said I have a response for him – the truth.

I stood and looked at my group of friends with their mouths gaping at me, when one of them ventured a spluttered, ‘What do you mean the truth, what truth?’ This had me in stitches, what truth? Clearly someone else needed a birds and bees lesson. ‘The truth’, I said, ‘ About how babies are made. What else would I tell him’. Again, I was treated to blank stares until one of my slightly bolder friends said, ‘ Right, I’ve got to ask, what the hell, specifically, are you going to tell him Harriet?!’ Now to me, this was all a bit silly, a group of grown women, all who have kids themselves – so should have at least a vague understanding of how they got there – aghast at the thought that I wasn’t going to tell my son a random story like the stork. I calmly said the following and I stand by this despite their looks of horror and half humorous threats to call CPS, ‘ I will tell him that a mummy and daddy get together and make a baby, if he asks how, which is highly unlikely at 3 years old, I will tell him that Daddy has something called sperm, which swims to Mummy’s egg and they then mix together to make a baby… it’s a miracle of science and life’… again I was pushed, but what if he asks where the sperm comes from, what if he asks this, or that… The fact is, if at 3 years old he wanted more details I’d be pretty amazed, but I wouldn’t lie. Why would I?

Another example of my apparently lack of parenting filter is the topic of death, and this is one that my husband struggles with horribly. If any questions like this crop up around him, he either exits the room with a mumbled ‘Talk to mummy’ or just quotes to phase ‘We’ll talk about it when you are older’. Personally, I have the same view with this as I do with everything, I will tell the boys the truth. I feel that the only thing that can come from shying away from the topic of death is to create a fear of it. I had a conversation with Reuben not so long ago about my father and where he was. I think death is a very difficult topic to explain, especially if you aren’t religious, however I went along the lines of ‘My daddy, your Grandad, is all around us and in the sky, he isn’t here for us to see anymore, but he is always in our hearts. He died before you were born’ Reuben frowned and gave me the anticipated ‘why?’ to which I replied, ‘ Because sweetheart, everyone and everything has to die eventually, it isn’t something to be scared off, it is just something that happens.’

Don’t get me wrong, none of these are topics I particularly want to discuss, I don’t really feel the need to sit down and chat about my own mortality, but if he asks, I will not lie and that is where I seem to differ from a lot of parents.

Ir recently wrote about a book that I have purchased called People by Blexbolex (you can read the review here) and I found that even in some of the very forward thinking homeschooling groups, there were people who felt that the topics of death, slavery (which could crop up because there is an image of a slave on one of the pages – which I see as a great way to discuss oppression etc with my boys if they ask) and other things such as religion and cultural beliefs are not appropriate for “little minds” as one person put it. To me, children don’t have “little minds” their minds are amazing and depending on how you broach a topic, you can talk about anything with them. Keeping things truthful and simple works in my family, and I wholeheartedly believe that it is the best way to be. Life isn’t a bed of roses, but life is amazing and shielding children from parts of it, if they show a curiosity, is pointless to me.

What do you think? Do you tell little white lies to your children to avoid the awkward questions and difficult topics?

P.s – I should also note that we do Santa in our house (yes, I know hypocrite) because as much as I am a believer in telling children the truth, I am also a big believer in children enjoying magic and wonder while they can. Do I tell the boys there are fairies too? Yep. But would I explain that their pet cat has died and is no longer here but in our hearts as opposed to the old gone on holiday for a long time? Yep.