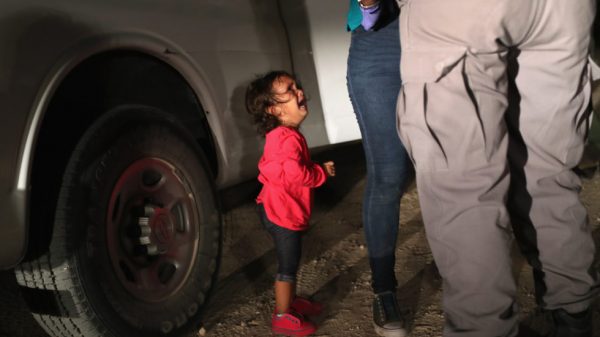 I am writing this open letter to you as a mother of small children who can’t sit by idly listening to the news of what is happening in the USA, one of our biggest political allies. I can’t hear the tapes of children being mocked as they cry, see the news reporters breaking down because what is happening in their country is so horrific and inhumane and read reports from child health specialists claiming that this forced separation will damage these children for life.  Our children are our everything, they are our very reason for living, our future, and we would do anything to keep them safe. Who hasn’t taken their children out for a family day out and found that one of their children has wondered off or slipped out of eyesight for just a moment. Who hasn’t felt the overwhelming fear, the terror that builds a lump in the throat, when they can’t see their child and fear them lost? Perhaps a child goes missing at an event where everyone speaks their language and treats them with kindness, holding their hand and promising to help them get back to their parents. Such a common occurrence, something I myself have endured, but that child’s fear is palpable, as is their mother’s fear. Their father’s fear. In just moments, a fear builds even when you have all the help in the world to be reunited. Can you imagine that fear where there is a forced separation? Can you imagine knowing that your child is being kept from you as a punishment for daring to want a better life for them and yourself? For legally asking for asylum as these people have been doing?

For these children this could well be the last memory they have of their parents, taken from them and placed in what amounts to cages with a mat and a space blanket. John Sandweg, former acting director of ICE, has warned that these separations may well be permanent. These mothers may never hold their children again. These fathers may never kiss them goodnight again. My heart breaks at the fear in the voices of those children, it is echoing through my mind constantly and the knowledge that it is one of our closest allies, a man who you have invited to our country as a guest – it’s sickening.

The UK is supposed to be a place that stands up against the injustices of the world isn’t it? The small but mighty nation that believes in human rights, that protects human rights. Yet when one of our closest allies is not only breaching fundamental human rights in such a cruel way, using infants for collateral, using children as a weapon, a deterrent against their parents seeking a better life, we do nothing. We welcome their leader, who could have stopped this injustice in minutes without waiting until too much damage has already been done. We welcome him into our country with open arms and ally ourselves to him.

Theresa it is no coincidence that the US has left the EU Human rights commission just as they make one of the biggest pushes to violate the human rights of these children – some 2000 children in 6 weeks – and their parents. When high powered congressmen and women, even members of the church who have long supported this president and his administration, are pushing back against these atrocities and turning their backs to him, why aren’t we? Dr. Colleen Kraft, the president of the American Academy of Pediatrics, is one of many to confirm that this is not acceptable, that separating children from their parents “is nothing less than government-sanctioned child abuse.” The US calls them tender age facilities, the nazis called them concentration camps, the differences between the two are getting slimmer and slimmer. The youngest child reported to be forcibly removed from parents is 8 months old, something that under the new “zero-tolerance” policies that the Trump administration has sanctioned is possible because any immigrant who crosses the border is automatically a criminal. Even when they exercise their legal right to claim asylum, to ask for help when they see no other option. These people have committed no crime, none whatsoever, yet their children are removed from them and the swiftest way to have them returned is to give up that claim for asylum, pass up that chance at safety and admit to a crime they have not committed: asylum fraud.

As a mother, I am writing to you to ask you to stand up against the Trump administration and the clear human rights violations that have taken place against children in the US. President Trump may not be separating anymore children from their families when they legally request asylum but some 2300 children who have already been separated may not be reunited at all with their families. I don’t want you to talk to Trump and use our “special relationship” with him or his country on 13th July. I, as a mother and as a human being, can’t stomach the thought that we have a “special relationship” with someone of this calibre. Using children as weapons is not something that we can be seen to support, zero tolerance must be our reaction to this intolerance.

We cannot be naïve in our belief that this is the end of suffering for immigrants under the Trump administration, that this will be the end of cruelty and hatred. Detention centres are still filled to the brim with people who have done nothing but seek help, people who are referred to as an “infestation” by the President. The exact words used by Karl Lueger, documented by Hitler in Mein Kampf. We, as a nation, made allies to fight against these atrocities too late last time and millions of people paid for it with their lives, let us not stand by idle and continue an alliance with a country whose policies grow more and more abhorrent and less tolerant every day.

Cancel Trump’s visit to the UK and demand action to reunite these children with their parents, it is within your power to do. Condemn this for what it is and don’t stand by whilst we watch a re-run of history’s darkest days. We stood up against atrocities in the past, we can do it again.