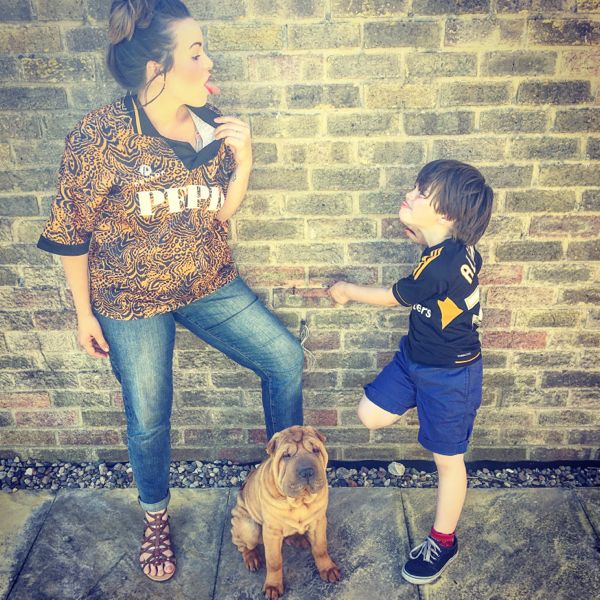 Pre football, wearing the most hideous shirt in Daddy’s collection, all because this little monkey picked it. Parenting on fleek!

As a mother of three children, I often feel like I’m using the phrase “Just a minute, let me deal with *insert child’s name*” and I hate it. I find it so hard when I sit back at the end of the day and realise that I have been on a constant cycle of trying to give each child the right amount of attention while stopping them from killing each other or breaking too much stuff. Sometimes I wonder if they will look back and think I did a rather impressive job, and other times I wonder if they will feel like I let them down, ignored them too much and just didn’t really do what they needed.

I can’t be in three places at one time, I’m good but that isn’t a skill I have acquired yet, so I have to default to plan b, and plan b involves the old divide and conquer technique.

Last weekend we had a bit of a parenting win, we took Reuben off for some much needed one to one time while we left the tinkers with Maw Maw – which they were most delighted by! Adam and I took Reuben out for the day, we left at about 10am, took him for lunch, to a football match he didn’t want to watch so he sat and played on my phone like a true 21st century preschooler and then played in the play park for 45minutes before heading home. Reuben felt special, we felt like we’d done something bloody ingenious and balance was restored. Everyone went to bed with a smile on their faces, including the toddlers who had been stuffed with McDonalds and taken to Toys R Us for some play sand ha!

The truth is, parent guilt kicks everyone’s arse, it is a brutal mistress and we are but it’s slaves. Even the most confident amongst us gets filled with self doubt and frets over whether or not we are doing this right. There is no manual after all.

I’ve become a big champion of the old “one to one” time, taking an individual child out for some extra special time with just you or both of you. It makes a real difference. With Reuben being at school now, I really feel like he does f get to have so much time with myself or Adam, especially Adam during football season as one of the only days he could have one to one is spent watching the toddlers during swimming lessons. Which is really very little fun when you are 5 years old.

One to one time can be rather easy to do too, especially if you have little ones at nursery or relatives/friends that can step in and help. It doesn’t have to be elaborate though, just setting the toddler/baby up with something like a movie and chance to chill, while you do some crafting or reading or baking, with your eldest can make a big difference. I’m not saying it’s all about the older kids either, what about the middle child, or the baby?

One to one for Toby is coming in the form of a cinema trip in a week or so, we’re heading out to see  The Secret Life of Pets and Reuben has announced that he has exactly zero interest! Edie gets it all the time on a Friday morning when the boys are at school and preschool.

If you can, take time to do some one to one, you’ll see how much it means to all of you.