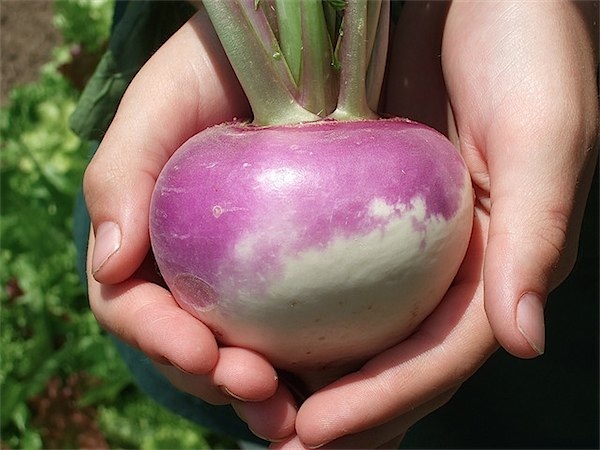 Baby is approximately the size of a turnip during the 17th week of pregnancy!

What’s happening to baby this week?

This week baby’s skeleton is changing  from soft cartilage to bone, and the umbilical cord is growing stronger and thicker. Baby now weighs about 5 ounces, and is around 5 inches long! Joints can move, and the skin is getting thicker too, not to mention sweat glands are forming!

The reality: How have I been feeling this week?

This week I have had a mixture of real energy and extreme tiredness. I haven’t been sleeping as well as previously, not because I am uncomfortable, but just because I seem to be waking up about 3am and unable to sleep again afterwards! It’s crazy, and usually takes me an hour or so to drop off, guarantying a good hour and a half to two hours before it’s time to get up… I can honestly confess that I was delighted when Reuben insisted I came to bed with him at 8pm earlier in the week!

I’m still not really eating as much, though I seem to have developed a taste for more nutritious food again and I am looking forward to things like sunday dinners and vegetables with chicken etc… makes a change from the terrible fatty food I am been indulging! I’ve also been able to enjoy getting ready for our holiday with a spot of holiday shopping, ASOS and Isabella Oliver sales have been well utilised!

We also had another scan this week, so exciting and I can’t express how wonderful it is to see baby! We won’t be having our official 20 week scan until later next week but I had to have a quick peek when the opportunity arose at a local scanning unit!

Sadly, ASDA chicken spring rolls are still a firm favourite. I seem to have replaced my fatty foods with a desire for vegetables too, which I am delighted about! I hate fatty foods like McDonald’s and the such, but I really have been drawn to it… hopefully that ill stop for the remainder of this pregnancy!

The bad, adorable and downright funny.

Reuben seems to have noticed that my breasts have grown this week. Earlier in the week during a shower he came and patted me, only to inform me that these were for babies to eat from weren’t they Mummy? Yes sweetheart, yes they are!

Toby has been patting my bump a lot this week and I’ve been trying to teach him to say baba. We don’t go for long because the patting turns a touch extreme after a while!

The lack of ability to sleep the night through properly. As if my sleep patterns aren’t shattered enough with two toddlers, I now have a delightful period of sleeplessness at about 3am! Joy!