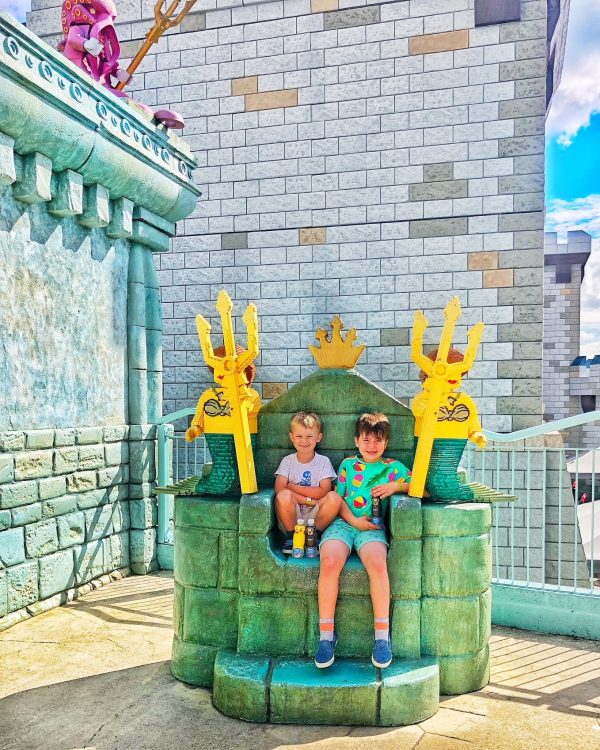 The boys have always wanted to go to Legoland Windsor. It’s somewhere that both of them, from theme park daredevil Toby, to Lego loving Reuben, have always asked about doing, so when Nestle Pure Life oﬀered to send us there in conjunction with their Water Buddies campaign, we were delighted. 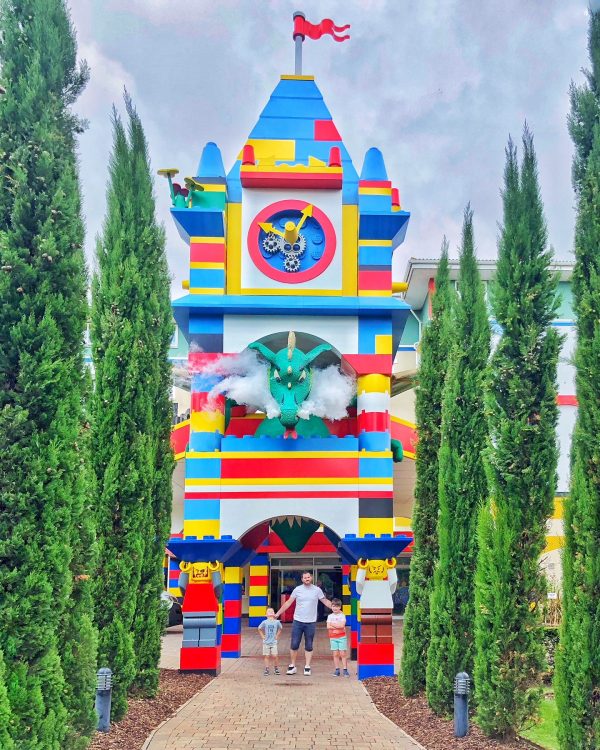 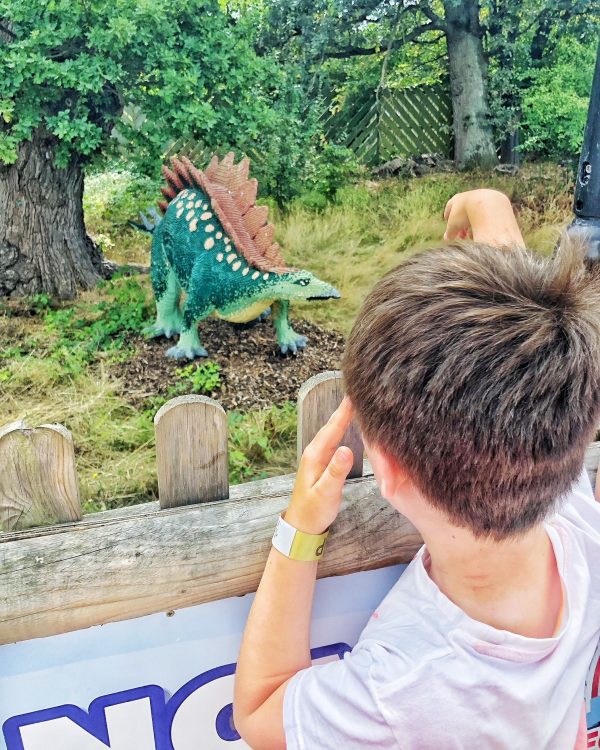 Water buddies have been invaluable to us on big family days out these past few weeks. The children have slipped into the habit of drinking apple juice with every meal and having sugary fruit juices in between whilst we’re out, and whilst I’ve always maintained everything in moderation and that they can have the fruit juice on our treat days, we’ve spent a LOT of time on the road and out and about this summer holiday, which means that what should be a treat has casually slipped into the norm. The problem is twofold here: one, they are like hyper little devils BEFORE the added sugar from fruit juice or kid’s sugary drinks, and two, they don’t get enough hydration – something that I can tell with Edith fairly quickly because of the strength of her urine, which rapidly causes us issues with potty training soreness – a nightmare when you are stopping on the motorway to break up a 7hr journey. Turns out that this lack of hydration is a common problem – 65% of children under the age of 16 don’t drink enough, and two of my three are absolutely in that 65%. I just ﬁnd it so hard to get them to drink without nagging them.

Water buddies emoji bottles are both fun and practical. They are easy to carry in my handbag or under the pushchair and perfect for little hands. Edith loves the pink tiger (obviously), Reuben loves the yellow mwah (because it’s yellow!) and Toby loves the “oops” monkey. Having these with us meant that I saved a bunch on the usual bottles of juice, the kids drank wayyyyy more water than they ever normally would and I didn’t have to contend with arguments over “dat was myyyyyyyy dwrink” from Edith because everyone had their own diﬀerent bottle ﬁlled with just what mama wanted: water. 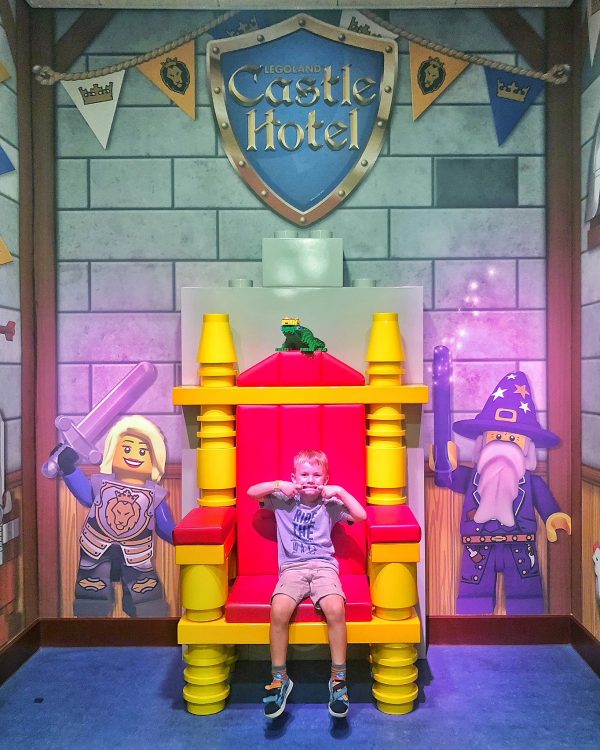 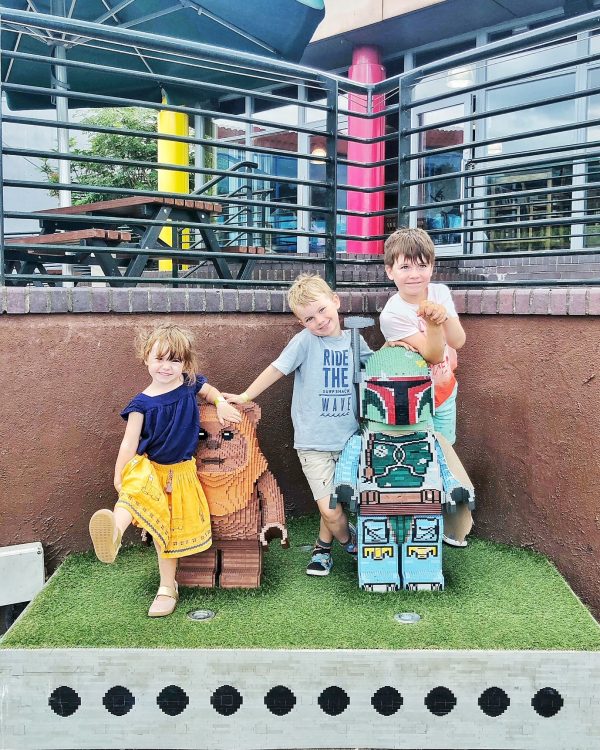 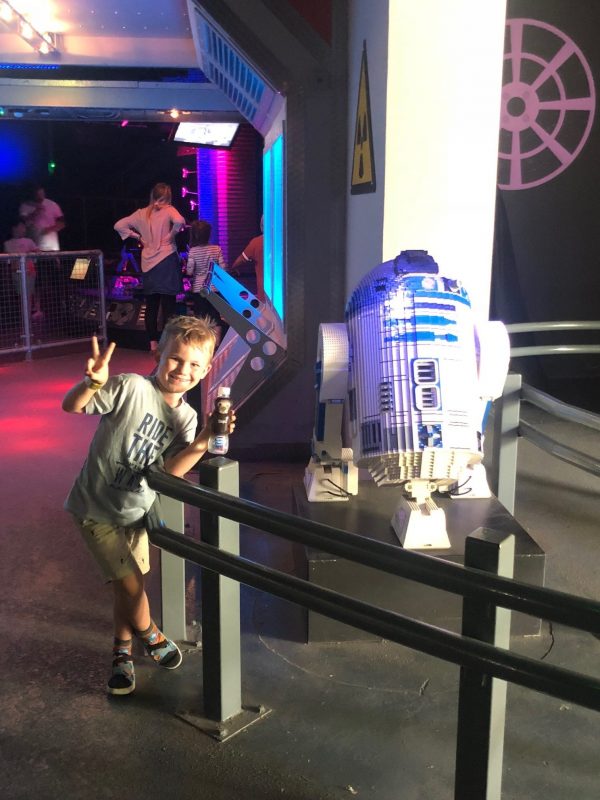 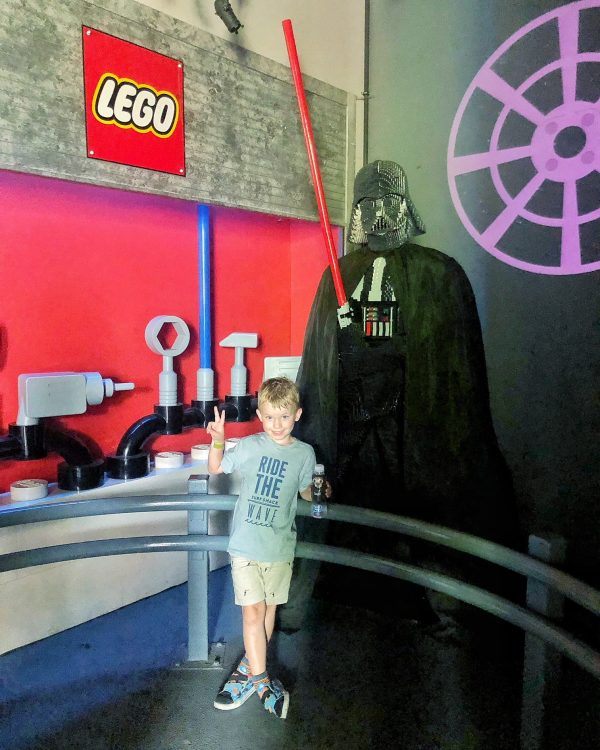 Back to LEGOLAND Windsor!

LEGOLAND Windsor is one of the best places we’ve tried out this holibobs. We arrived just before lunch time and checked our luggage into the Legoland Windsor hotel where we were staying. The ﬁrst thing you should know is that Legoland Lego hotel has its own car park so don’t go directly to the theme park car park, go to the hotel ﬁrst. We picked up our tickets from the reception desk and booked into the Bricks Family restaurant for dinner and breakfast.

It’s worth know that you have to book dinner and breakfast slots which ﬁll up really quickly. We had breakfast at 7.30am and as I write this now at 22.10 with Adam driving next to me I can certainly say I would have preferred the seemingly coveted 8-9am slots because we had to set alarms, wake the kids and rush! Book early, before you arrive I would say. As for dinner it was PACKED; but there are more restaurant options so you should have something. We ate in the Brick’s restaurant both times, and I can say with certainty that the food was average, not worth the price but all you can eat and the decor and play area just outside make up for it! On the evening it was a world buﬀet (the tacos are probably the nicest bit) and the morning was a standard hotel buﬀet with fried and cereal goods. We were told that the castle restaurant was MUCH better and I wish we had the foresight to eat dinner in there but the kids were shattered and we were told the Castle restaurant was a bit less relaxed and not all you can eat self service.

You also need to book the hotel pool time slot if you want to visit the Legoland Lego hotel pool. I would really recommend it but make sure that you bring a second set of swimwear or you swim the night before you visit the park and leave the swimwear to dry because you won’t want to miss the Duplo splash valley area of the park – it looks amazing and there are 10 rides to help the little ones cool down in the heat. Your children could go in the area in their clothes or pants (there were
a few children in there when we went) but I would recommend using the changing facilities and making the most of it. It does get pretty busy!
We went straight to the park through the hotel as our room wasn’t ready for check in until 3pm. The park can be accessed through the hotel which I thought made for a nice touch because you enter the park at a totally diﬀerent area to everyone else so it was MUCH quieter. 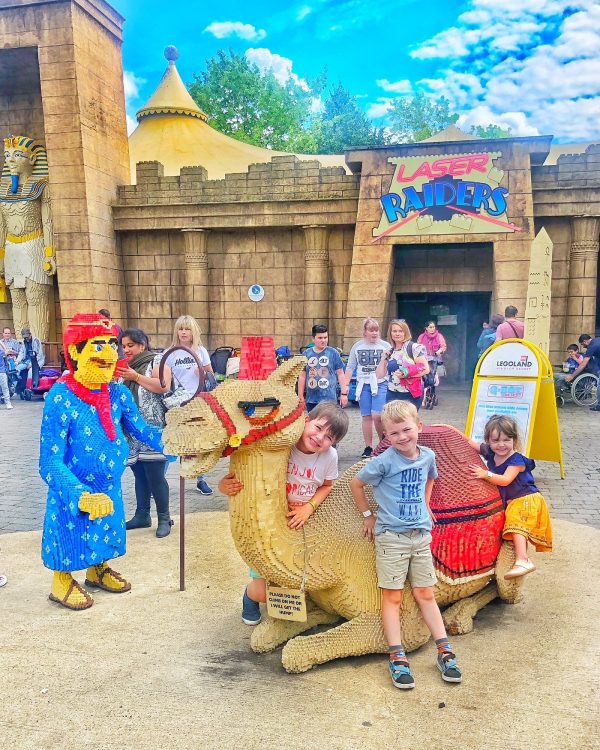 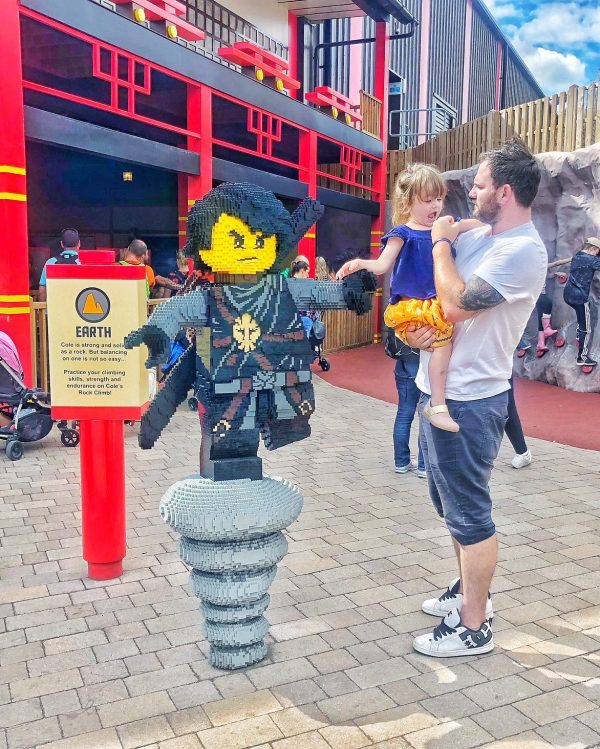 If you come out of the hotel and turn right it takes you straight up to Atlantis and the submarine ride, which I thought was AWESOME; you are genuinely in an aquarium, with the Lego submarines taking you around the sharks, rays and wonderfully colourful ﬁshes. Not to mention all the Lego divers and statues. We also really loved The Dragon rollercoaster, however it’s one of the only rides that Edith couldn’t go on. The majority of height restrictions are 0.9m, which Edith is, however there are a few that are 1m, which was simple for us as we didn’t want to go on for ourselves so the boys would go on with either myself or Adam, however if we had wanted to go on too, Legoland oﬀer the parent swap, which they also oﬀer for children under 1.3m who have to ride with an adult but have come with a single parent or family member. We saw a few kids waiting whilst their siblings went on – something I wasn’t sure my boys would do but the staﬀ are honestly phenomenal with the kids. They put them right at ease and do everything to entertain them.
Reuben really loved the Learner Driver school (Edith went on the junior version for 3-5 year olds) which the boys got a little drivers license from! Another favourite on our list was Fairytale Brook, which Edith could go on and LOVED! She seriously adored seeing all of her favourite stories, from all the “big bad wolf” classics to the Disney tales. Toby also loved the rapids which lots of people seemed to be avoiding unless they had ponchos, however you genuinely don’t get wet! What you do get absolutely soaked on is the Pirate Treasure ride (which I LOVED but the boys were fuming because they got drenched). 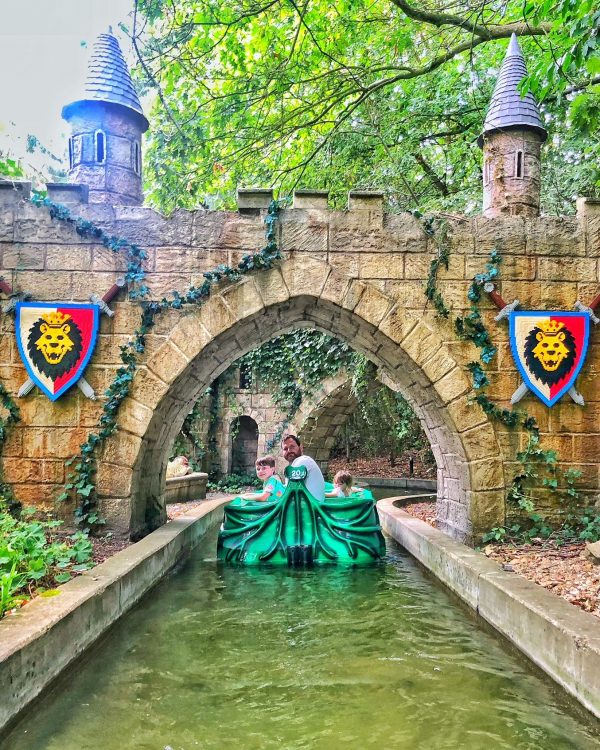 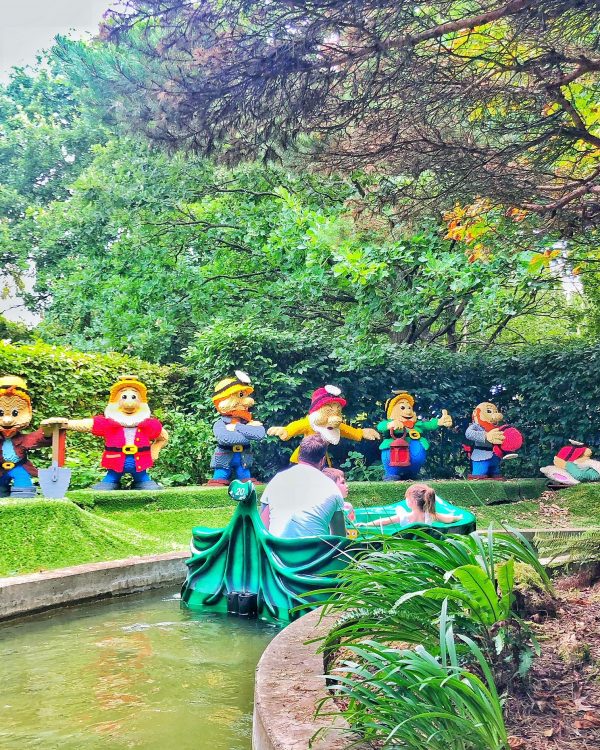 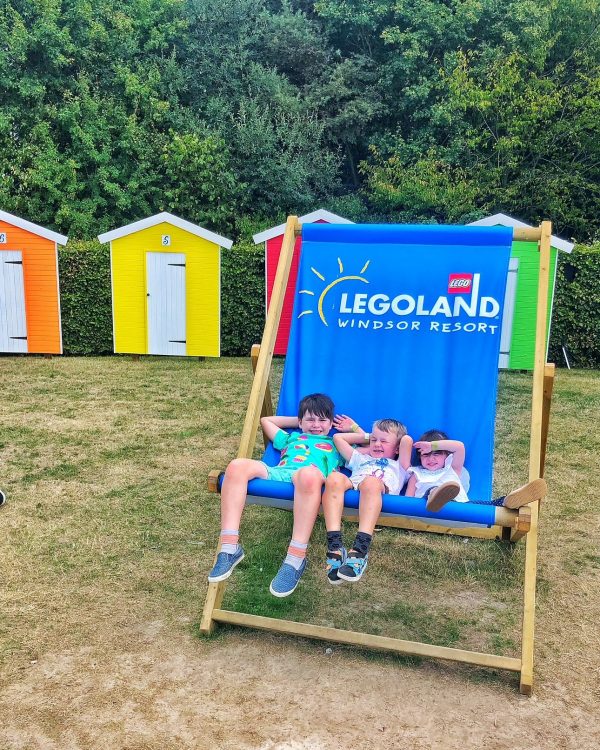 The only thing that I would note on the ride front is that for the queues get so long. It’s not such an issue on the smaller rides but the rides in higher demand really do develop 45-90minute queues. Nothing spells fun on a day out like queuing for Ninjago (which was my favourite ride) for 1hr30mins and then doing the same for another 2-3 rides. Q-bots are the way to go if you can allocate some of the budget to it, they are pricey but they make a world of diﬀerence. If you don’t have the extra budget to spare then fear not, the queue management systems at Legoland are pretty good with almost every queue having Lego building areas so you may well ﬁnd that queuing is your child’s favourite part of the day!

As for food, we tried both Farmer Joe’s chicken which is located near Duplo Valley and the driver schools, and Pasta & Pizza which is in Heartlake City. It was nearly £40 in Farmer Joe’s for what really was burgers and chips or nuggets and chips and although Pasta & Pizza would have worked out £20 more it was all you can eat and I felt much nicer and much better value. Ultimately, the food places in the park are like any park – extortionate, but I think you expect that from large attractions. My recommendation is 100% with Pasta & Pizza, it was genuinely tasty, but as I said before – the park caters really well to picnics so don’t be shy in bringing a basket or cool box and ﬁling it with all your favourite things.

As it’s summer, LEGOLAND Windsor have a “Summer of Fun” going on, complete with a sandy beach which Edith loved, and it’s conveniently located next to Miniland, one of my favourite parts of the park! Miniland is everything you think of when you think Legoland and it doesn’t disappoint. The summer of fun also includes the “Make A Splash” challenge, which oﬀers park guests the chance to win a whole host of prizes, from fast passes to Lego sets and even more – the idea is
that you ride all 10 water rides in order to cool oﬀ in the heat! When we went on the Pirate treasure ride we were absolutely soaked – but dry within minutes because it was SO hot! On that note, one thing that has impressed me incredibly and that I haven’t seen at any other park, was suncream dispensers scattered around the park at various zones. I’m not going to lie, we forget suncream all the time. I am so used to putting it on early on but I do forget to take it with me and Adam never takes ANYTHING with him, so it slips through the cracks. It means I spend the majority of the day annoyed with myself and wondering if the kids will frazzle! 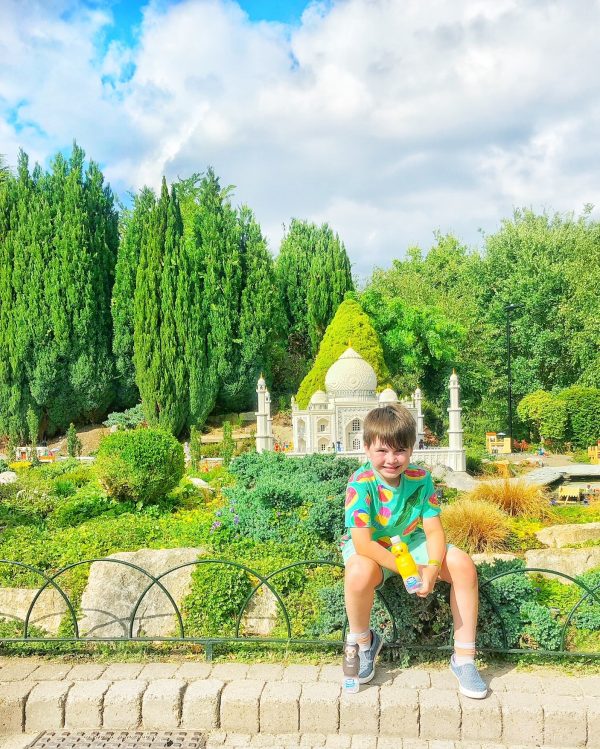 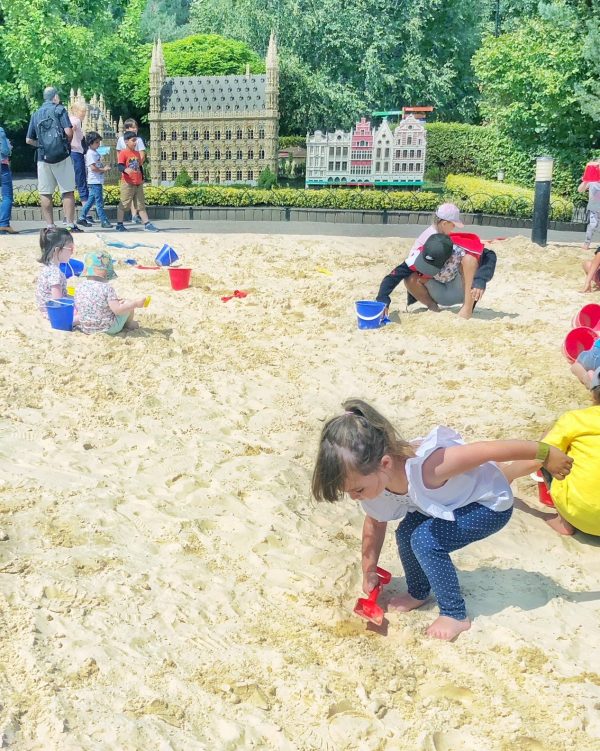 All in all, we would love to go back to LEGOLAND Windsor, Reuben declared it was one of his favourite places (despite us having a bit a fall out when he got over excited!) and that he never wanted to leave! Toby, despite not being as crazy about Lego as Reuben, didn’t want to leave either and cried when we left. I’m pretty conﬁdent that is a shining praise for a place if ever I have heard it. The whole experience was mostly positive, the only thing to be mindful of is the potential for large queues and how expensive things are.
On a very very ﬁnal note, watch out for the shops. From 3pm onwards the “big shop” asks you not to take your pushchair inside because it’s so busy – a sure indication to ditch the “let’s buy a gift/souvenir before we leave” idea we all have. When you ﬁrst arrive the big Lego shop is directly in front of you. Go in and select something – if you plan to get anything – before you leave. There are plenty of little shops along the way with exclusives in, but all in all I would highly recommend avoiding that big shop and taking advantage of their buy and collect oﬀers.

Nestle Water buddies can be purchased at