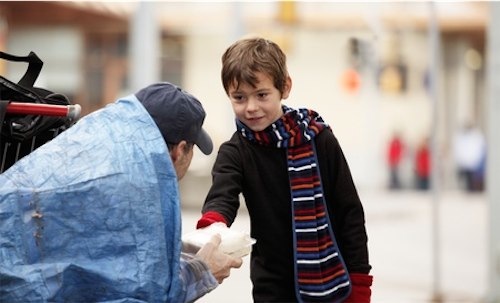 There is another side to Christmas that I think we all too often forget to talk to our children about, and we can help our children understand the true meaning of Christmas (and the concept of giving in general) in a few simple ways.

Call me Sancti-mommy if you wish, I’m sure some of you will, but for me there is another side to Christmas, one that get’s lost in all of the hum-drum of trying to get your hands on the latest toys, or the one thing that your child has suddenly announced they really neeeeeeeeed, despite it being sold out internationally since October!

Christmas is about giving, yes, and if you are religious it can have many other meanings, but giving doesn’t have to be about gifts or treats, it can be about so much more and I really want to show the boys that side of Christmas, especially at such a young age, so that they can really understand what it means to be as fortunate as they are. I want them to understand that there are kiddos out there who will never receive any advent calendar gifts or chocolates, who will never open a single present on Christmas day. I want them to know that at this time of year some people are very sad because they don’t have any family or anyone to love and to say Merry Christmas to. People may have to be away from their families if they are brave soldiers or even if they are sick.

All of these things are easy to talk about (well, they aren’t but they are easy to pay lip service to, and do nothing about) so I wanted to come up with a few things that I think I could do with my boys that would explain the idea of giving and would help them to realise that people aren’t always as fortunate as them. I also wanted to do it without scaring the life out of them, or giving them the impression that we only ‘give’ or think of other’s at Christmas. We should be kind and thoughtful all year round, but when we have a bit more at this time of year, and it is especially hard for some, we can do what little we can.

This is something that I feel really strongly about, and I’m going to make it into a bit of a tradition in our home. My boys have the most obscene amount of toys, some of which they hardly ever play with. So, this year I have explained to them (Reuben get’s it a bit better than Toby for obvious reasons!) that we are going to choose a toy that we don’t really want anymore, that we never play with, and that we won’t miss and we are going to take it to a little boy or girl who doesn’t have many toys (or any) and donate it. I’ve taken the boys with me to do drop offs at the local charity shop before, but I wanted to go a bit deeper with this one because to the boys a charity shop is still just a shop. I’ve planned to take them to give a few things to a local women’s shelter in our neighbouring town, but other options are the local children’s hospital, a local children’s centre, Salvation Army centres, or even a local play group! Many places will happily take donations and be grateful for them.

I don’t know if this has been imbedded in me because my Mum used to work as a manager in a local hospital, but I think it’s important to give back to the people who are providing a really important service over the holidays. Let’s be honest, it’s pretty sucky to be at work when you have families to be at home with (after being married to someone who managed in the hospitality industry for years, I’m used to saying goodbye on Xmas day, albeit for a handful of hours) and I’ve always hated it. I think it would be lovely to nip round to the local hospital with some mince pies or a box of quality streets for the staff, just to say thanks for looking after us. Plus it’s a great opportunity to explain to the boys what important roles nurses and doctors play… and for them to play spot the ambulance!

The boys gave me a hand with this one, we bought a few tins of soup and other things, and put them in a box to take to our local Salvation Army centre. It was a great chance to have a chat with Reuben about the situation that some people face and how they won’t have a permanent home for Christmas this year, but this kind of place (a shelter) is a place where people are kind enough offer there time and help to make sure that no one goes hungry or gets cold. By giving some tins that would probably just sit in the cupboard, we can make a real difference. I also explained that some people don’t have money to buy their own tins, and that can be very hard, but when we do have that little bit of extra money, we can help them by getting some tins to share. He did ask me if Santa ran the shelter (bless him!) to which I explained that no, because this happens all year round and the shelter was run by kind people.

The boys (especially Toby) love animals, they really quite obsessed. So we will be taking some food to the local animal sanctuary to donate, and I will be explaining that some animals aren’t loved like ours, but are mistreated or get lost and they need to eat too, just like people.

I don’t often do these kinds of things, because you hear so often how the goods never received the intended recipient, but if you do do this, I think it’s the perfect way to get your kids into the giving spirit. You can go and pick up the items that you intend to give together and you can pack the box together. If you didn’t want to do this kind of appeal from the doorstep, but wanted to give to a charity of this kind, then google local charities that you can physically take things to that will be donated to troops etc.

I hope this gives you a few ideas, there are so many things that can be done, but these are a few that I thought were appropriate for my boy’s age group. Maybe when they are older they can do something different, but I think this is the right amount now.

Is there anything you do over the Christmas period (or indeed the rest of the year) to share with your children how important it is to look after the rest of the world? Would you do any of these things?