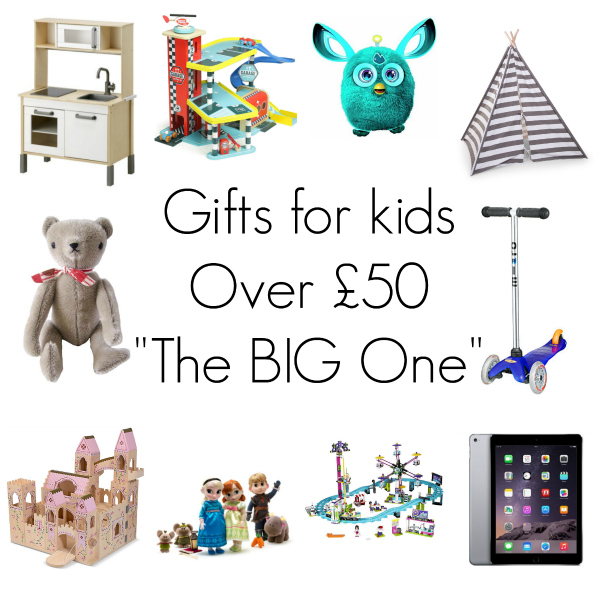 Klaxon please!! It’s time for “the big one” Christmas gift guide today, of course it is the gifts for kids over £50 one. This is what I consider an expensive gift and what my kids get one, max two of every Christmas. It is something that usually makes it on to their wishlist at the tippy-top with underlines and daily pleas.

I love Ikea, I’ve been a fan since before it was cool to be a fan, so it makes sense that I would love their kitchen play set. I actually have a different one at home because I didn’t know this was about and I can honestly say I wish I hadn’t spent the extra money as this has everything I think the kids would want for half the price. It is stylish, minimalistic and totally “on point”.

I love Vilac, it is wonderfully made, super stylish and so colourful without being gaudy. I’m a sucker for wooden toys so this is a real delight to me. The boys have a very similar garage and had this been around when I bought their first garage I would have gone for this for sure.

I had a furby as a child and I LOVED it. These are nothing like that furby, they leave it in the dust and have managed to make it to the top of Toby’s wish list after watching a youtube unboxing and app demo. Originally he wanted a Hatchimal but they simply can’t compare to a Furby and after many reports that once the Hatchimal had actually hatched it was basically a naff version of a Furby, there was no way I was spending money on one if I could help it!

I have always wanted a tipi tent for the boys and these from Urban Avenue are my favourite because they are reasonably priced and so lovely. I love the grey and white design – perfectly unisex and ideal for any play room or bedroom. Plus, tipi tents make an awesome place to “hide” toys when the kids go to bed.

It wasn’t actually my intention to include the micro scooters in my gift guides but I have ended up including them in both this one and my ‘gifts for baby’ which is coming up tomorrow. I really can’t tell you how much I love them and how much the kids love them. They have been one of the best things we have been sent all year and the children are desperate to get their trial ones back from “santa”!

I know, I know. Sorry, not sorry. A few months ago we bought Roo a kindle because his old iPad packed up and we didn’t want to spend the extra on an iPad. In truth, I wish we had. Yes, the kindle does very similar and yes there is the most amazing monthly subscription but I was recently using that “monthly kids unlimited” to read the Harry Potter books when they suddenly disappeared, much like the items on my sky demand do after an allotted amount of time. It was INSANELY frustrating and really put me off – with an iPad, the screen is bigger, you get what you see and you have access to far more apps. We do still adore the kindle, though and amazon’s policy that if you break their “kids” 7″kindle you just get an exchange is in keeping with more or less everything about amazon – EPIC service.

I chose the amusement park because the boys would freak out at the moving rollercoaster and ferris wheel. They would love this, and it is certainly one of the best lego sets I’ve seen for a while, however there are a tonne of lego sets that are more or less exactly the same price just to suit every desire. One of the reasons you will almost always find Lego on my recommendation list as a timeless classic.

Oh geez, guys I’m a sucker for Disney animators. JUST LOOK AT THIS! I love this set, and Edith would too juging by her reaction when she saw it last week in the Disney store. I have to add as well that this set is actually on offer at the moment and reduced by quite a bit (at least, it was as I was typing this!) which I thin it fab for three large dolls, the trolls and a Sven, not to mention the accessories.

I love a good castle and this one is so pretty. I have a sneaking suspicion that my in-laws have bought this one for Edith and having the “medieval” version, I can attest to it’s quality and the hours of play it will receive. Ours gets battered and played with, it has been a train station, a castle from Sodor, a hidden castle, a monsters lair… the list goes ON. A castle, especially a wooden one, is a brilliant gift for any kiddo.

You know, I still have my (very battered) teddy that was placed in my crib when I was just a day old. He still sits on my bed at nearly thirty and I love him. I have always felt that you can’t price a first bear, I know people think it’s just a soft toy but it isn’t, it’s so much more. I really felt like these teddies (grey, pink and blue) were the perfect addition to the gift guide. If you’re looking for an heirloom gift, this is it.