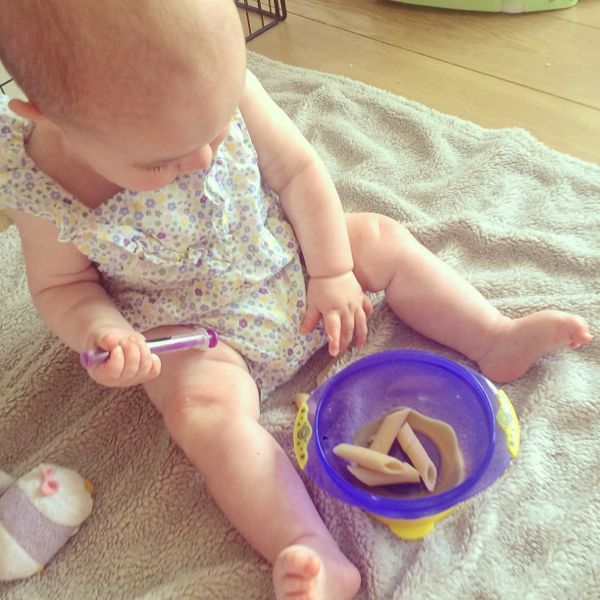 As much as it breaks my heart (I LOVE to cook baby food) Edith just wants to go it alone and feed herself, so I’m helping her do that with finger foods… FYI the pasta didn’t make the list 😉

I’ve never been a baby led weaning kind of gal, not because I don’t like the idea of it, but because I love making baby purée and watching their little faces as they discover a new taste. Unfortunately for me, Edith IS. It can take me over a week to get her to finish one pouch of baby purée whereas the boys were on two pouches for each meal every day by this point (yes, that is 6 pouches of baby food a day – sometimes 7 if they were hungry). Though Edie won’t really give me much enthusiasm when I feed her, she will take her spoon (I’m using these ones) and does like to chew the end and savour the flavour – so it isn’t the food she objects to, it’s relinquishing control of the method of in take! She will watch her brothers with pleading eyes when they are eating sandwiches at lunch, and at the moment, crusts pizza crusts and half eaten biscuits are being given to her like she is a new puppy… Which she gladly mauls to oblivion. My problem with her wanting to feed herself these finger foods is that I don’t really get to control what she eats by way of fruit and veg, so I’ve started letting her have cut up fruit and veg as finger food instead of just rusks, breast crusts and (oh the shame) pizza crusts. Here are her favourites so far:

Reuben will eat at least 2 whole cucumbers a day if I let him… Which I often do because they are only water and a good way for him to keep hydrated. I’d noticed that Edie was gawping at Reuben eating a cucumber stick one day so I asked him to give her one, which he kindly obliged. She LOVED it. I think it must have had a cooling effect on her sore gums because she has one every time she sees him with one, dragging herself over to him and squealing a thin until he chucks one her way… Like a puppy… Are you seeing the theme in our house?!

These are sweet and soft enough for her to enjoy, without being as soft as, say, banana, which she just mushed up and paints on the floor. I part boil them so that if she happens to take a chunk she won’t choke, she will be able to mash it with her gums. She isn’t as enthusiastic about these as she is about bread, but they do go down a treat.

She loves broccoli, just like her big brothers. It is one of our staples for a dinner veg and she seems to really enjoy it too. I make sure it is steamed and soft enough for her to mush with her gums, but still has a bit of bite to the stall so she feels like she is getting her gums into something. If she doesn’t get a piece of broccoli and we are eating, we will all know about it within seconds. Sigh. It’s like living with an adorable, mini dictator who has her sights set on conquering what she probably views as mini trees…

Again this is our go to veg (we have broccoli and carrots a lot) so it’s no wonder she likes it. She will maul a piece of carrot with the enthusiasm of a football support at goal time. I steam the carrots until they are soft enough for her to mush up but, like the pear and broccoli, have a bit of bite.

5.) Toast with butter or even jam

Ooh especially the apple flavoured ones. She loves them! I bought a packet to keep in my bag for days out and Edith hasn’t looked back since, she ate most of the packet during our trip out, with a touch of help from her brothers. She really does love these so I will let her have them on occasion, though not everyday because, despite saying they ok and healthy, I don’t really see the same nutritional value you would get from a carrot stick or piece of broccoli.

Has your baby forced you into baby led weaning? Or maybe you like going that route yourself? If so then please share your ideas with me, we could use some ideas.

P.s – If you are baby led weaning but you are struggling with the concept of your baby putting something into their mouth that could choke them (despite that being very low risk if you follow the correct method) then why not try one of the Nubi Nibblers, you put your cut up food into it and baby chews it through the bag eliminating any risk of choking.