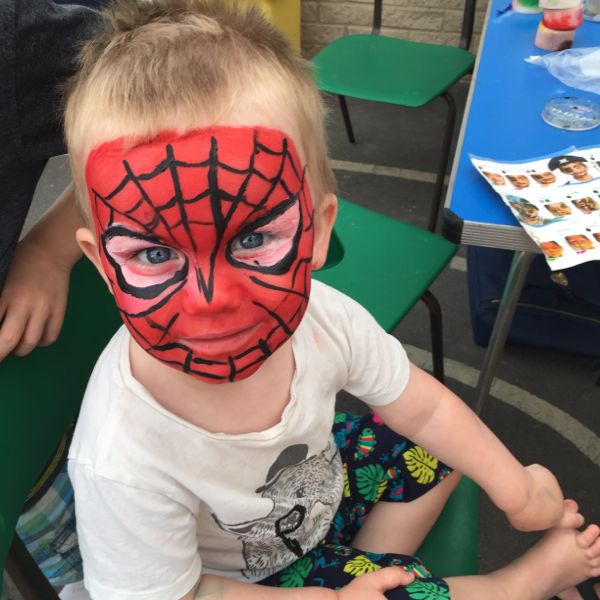 Doesn’t he look awesome?! Unforatunely, a reaction is something that you won’t know will happen until it does, and when it is mild like Toby’s there are a few things you can do at home and should ALWAYS do that will help to sooth your child’s reaction.

Last week we went to our first school Leaver’s party. Let me just say I was so proud to be a part of Reuben’s school at that time, it reminded me of my first school when I was a child. The relationships between the teachers and students, the family atmosphere, the kind-hearted generosity of everyone from parents to older kids, who helped out and offered various treats from homemade foods, to giving their time at the drink stand or face painting area.

It was truly awesome and the boys had a wonderful time – especially during the end of term water fight.

Both boys surprised us by wanting to get their faces painted. I’m assuming it was the other children getting it done that spurred them on, or maybe they have just grown in confidence over the past few months, but whatever the reason both boys had face paint applied by the lovely mummies who gave their time to help out and run the face paint stall.

Reuben had a lion (despite telling me for nearly 40 mins before he was going to be Captain Americaaaaa!) and Toby opted for a challenging Spider Man. Needless to say both boys were insanely happy with the results (how awesome do they look?!) and continued to play like lunatics on the loose for a few hours until home time.

Toby fell asleep in the car and as he has never really had sensitive skin before and we both remember going through phases of pretty much permanent face-painted awesomeness, we left him in the face paint and just plonked him in bed.

Unfortunately Toby woke up with a swollen, bright red and boiling hot face. He was anything but a happy bunny, though thankfully the reaction was really mild and we’re unsure of whether or not this was purely because of the face paint or if it was due to the amount of time the paint was left on (whoops!). I thought as its face painting season I would jot down a few of the things I learnt that might help if your child has a MILD reaction. These in no way infringe on what a professional tells you, but it’s what helped me. 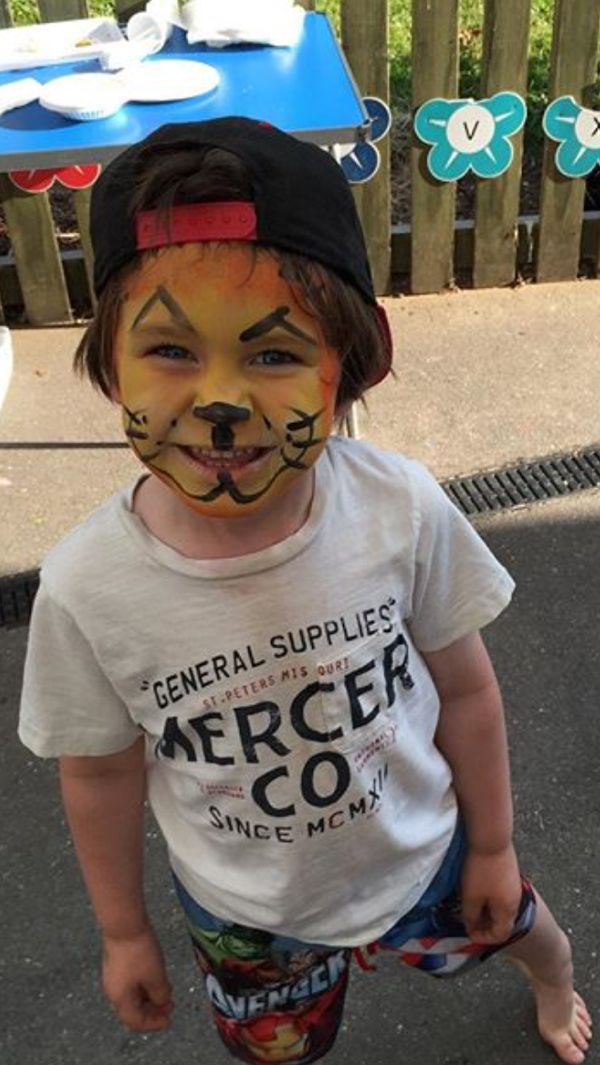 Just because one child has a reaction, doesn’t mean your others are more likely – Roo doesn’t have any adverse reaction to face paint and never has.

It doesn’t matter how mild the reaction, if a skin reaction occurs on the face ALWAYS go and seek medical advice. The reason being is that facial reactions can cause issues with eyes and breathing. It’s better to be safe than sorry. We were told not to worry, keep an eye on Toby and bring him back if it hadn’t improved in 2-3 days or if he developed anymore symptoms. If you wait and then your child has breathing problems, it could be so much more serious.

Using something like a wet flannel can be really helpful, and leaving your little one in the shower was also great for us. It let the steam get to his face and then I wiped him down with a wet flannel just to be sure. As a few people have commented below, wet wipes are really bad for removing face paint, I thought this was just a myth and spoke to a few pros that said they had never heard of it, but better safe than sorry.

No creams, no ointments, nothing. Just cool water or something recommended/prescribed by a doctor. I say this because the face is a super sensitive area, and something you might think will help that would normally help other areas, might make it worse. When Toby was little and had nappy rash I was given Aloe Vera cream and thought it would help – it made it far far worse because he doesn’t respond well to Aloe Vera. You really wouldn’t think aloe Vera could harm, but it did. Just be careful and leave well enough alone unless told otherwise.

I used an antihistamine liquid I bought from the chemist that was suitable for Toby’s age group and could be given every 4-6hours. I was told by the doctor that these are more effective than the once a day style antihistamines you can buy for kids, but check first.

This is what I was advised, any reaction of this kind should be kept out of the sun, otherwise it might irritate it further. I’m not talking go dracula style here, but a big sun hat and avoiding being outside in full blown heatwave sunshine is best.

Toby just sat on his iPad all day and I do mean pretty much all day. The antihistamine took it out of him and he was sore, so I left him to it and dished out cuddles on demand. I played his favourite movies, read him some of his favourite books and just let him chill out. I also utilised our “poorly time means treat time” clause and let him have sweets, chocolates and ice cream to his hearts content. Oh, and slices of ham with cubes of cheese because that’s his ultimate lunch!

I hope that helps if you find yourself in a similar situation. Tobes is fine and we’ll test drive face painting another time when we’ve done a sample test on his ankle or something!