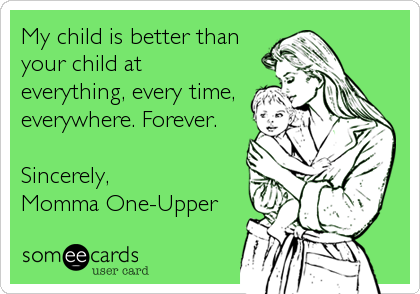 Seriously? How is competitive parenting useful to anyone?

A few weeks ago I visited a local playgroup with Toby. It’s been years since I’ve had the chance to visit a playgroup with children that we don’t know and this one was suggested to me by a friend from the school run. When I arrived I bumped into one of the mamas I met when I did a baby massage course years ago, and it was great to see her and the new additions to her family. We were never especially close, in fact we weren’t even real what you would call friendly, more civil, and as we were talking outside the playgroup, I remembered why. This particular mother is what I would call a ‘competitive parent’ and I really can’t handle that.

I think most of us have been unlucky enough to encounter this type of parent at some point in our parenting journey, and try as I might to look deeper and be understanding that maybe this attitude comes from a place of insecurity and the person feels they need to act this way to prove something because maybe they are a single parent who feels they have to over compensate (though I struggle with that explanation as my mum was never this way and was a single parent from when I was 4 years old) or not coping well with their life changes, there is maybe some underlying reason, I just can’t help it, no matter what, it pisses me off.

Look, parenting is insanely hard, you know it, I know it, but at the end of the day, parenting can be made easier by celebrating those mini achievements (you know, like getting your children to eat something sort of green… Like apple flavoured jelly) and as parents we should do it together. We should be each other’s champions because we all know how damned hard it is. From the moment we started to discuss our kids I had to bite my tongue with this woman and I honestly couldn’t get away fast enough. Our conversation went like this:

Her: “How’s Roo getting on, is he joining this preschool?”

Me: “no, he’s at school now, we chose X school and it happens to have a pre-reception, which means he goes there full time if he wants. Oh he loves it! He was really ready for the next step, you know? How about your little girl, is she here?”

Her: ‘yes, yes. We’ve just started looking at schools. I don’t really believe in early schooling, T gets all of the things she needs at home with me… We do numbers and letters, you know, she knows her ABCs and counts to 20… then I guess that’s hard for you with three… I have two now and I wanted a bigger age gap so I could devote more time to T before school. What made you choose that school, it’s a bit far out isn’t it?’

Me: ‘Ahem, well it’s maybe 15-20mins in the car, but it’s the right school for Roo. It’s a forest school so it suits him and the way he learns, he’s really thriving there and that was the main thing for us. Have you seen any schools that you like? I think it’s so exciting, I just can’t believe how quickly it’s gone!’

Her: ‘hmm well, we’re just going to stick with the school nearest to us, I want T to have all of her friends nearby so that she will be able to play out as she gets older. What are you doing here then?’

Me: ‘well Toby is joining this preschool and we’ve been told there is a little playgroup on today that we can come to, so killing two birds by filling out the paperwork while we have a play date! How about you?’

Her: ‘well this is the play group I’m using for now, I’m not keen though really, I don’t think that T gets as much here as she did at the previous one, but this is the only place I can bring her to now that I’m living here. It’s just got quite a lot of other children here and I feel it holds her back a bit because the younger ones, like yours, are in with the older kids of her age and they obviously aren’t as advanced, so she tends to take a step back when she’s here’.

Me: ‘ oh that’s a shame. For me, it’s about socialising with Tobes. He really loves being around other kids and I hate the thought of him just sat at home watching the telly or playing with his ipad, which I feel happens all too often now I’m working from home.’

Her: ‘ he has an iPad? Oh god, I wouldn’t even let T have an iPad at 4. I guess it’s just one of those things, but I agree, you should get him out and about – it’s really bad for kids to be on the computer all the time’.

Even just that little snippet of our conversation, you can see the competitive ‘I’m doing it better than you’ attitude. Every choice I made, questioned. Every thing I shared about what my kids were up to, wrong. Do you know what I mean? It’s not helpful, it’s not the way to behave. Every time I talk to this particular woman, I feel like I have done ten rounds with Mike Tyson, its a mixture of demoralising and frustrating. I’m honestly not 100% sure she knows she’s doing it, maybe it’s just her way, but to knock others down to try and build yourself up is pathetic and sets a horrible example to our kids.

So, thoughts? Have you encountered competitive parenting? How did it make you feel?