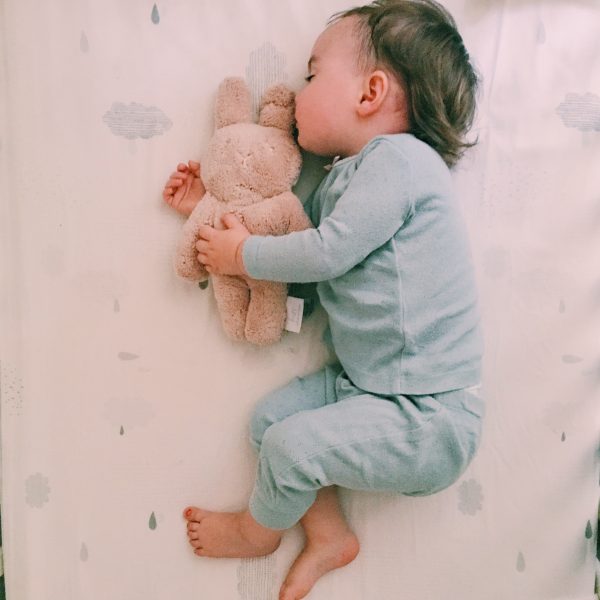 Last week Edie was sent a Britt bunny – a soft, cuddly and oh so adorable bunny cuddly toy that has fast become her must have snuggle companion. She has been nestling into her Britt bunny, which we’re simply calling “Britt” (I know, you don’t have to tell me how creative I am) every night, rubbing her face into it and tracing her fingers along the soft fabric.

The Britt bear was designed in Sydney, Australia waaaaaaay back (cos we’re all old now, you know that don’t you? Ancient.) in 1999 when a very lovely English born lady called Britt Collinson decided she wanted to create her own brand of baby toys and accessories. Her beautiful soft toys began their retail journey at Bondi Beach weekly market and fast became so well known that she expanded past her Australian home into the global market, providing bambinos everywhere with one of her beautiful keepsake teddies to love and cherish. I have no doubt that, had Edith had her Britt bunny from day one, it would have pipped Flora fox (her beloved bestie) to the top soft toy in her bed post.

The very best thing about Britt bear is their emergency bear service. Yep, like the NHS but for teddy bears and a whole lot cooler. Basically, if your little munchkin loses his or her beloved little friend or their sibling chooses to dissect the aforementioned teddy, Britt Bear will repair or replace it. I know that if anything were to happen to Reuben’s Harold bear or Toby’s Fudgy Bear it is possible that myself and Adam would never be allowed to a.) forget it and b.) sleep again through to sheer despair. I love the fact that Britt Bear understand that a soft toy really can become the most important thing in the world to a child, both a safety net and best friend all in one.

This isn’t just a quick brag about how Edie has managed to get her frequently chocolate coated paws on one of these teddies, no sir. I’m offering readers the chance to win one of the iconic Britt Koala teddy bears in a colour of their choosing, simply by entering the rafflecopter competition below.