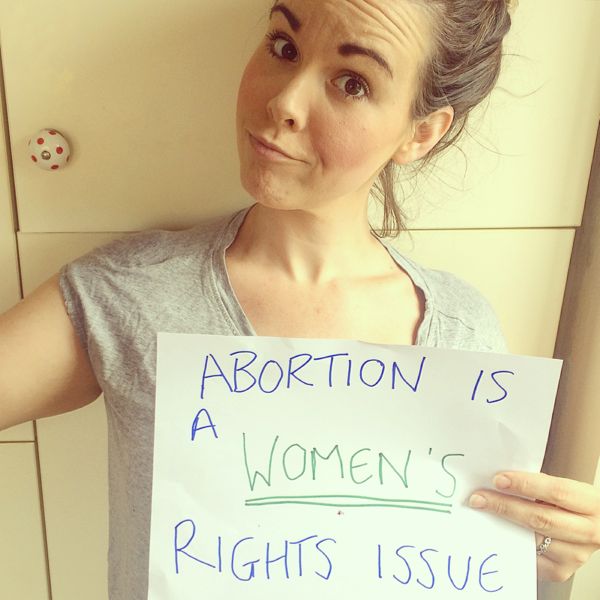 If you are a long term reader of the blog then you will know that I am very dedicated to women’s rights and gender equality, so it will probably come as no surprise when I say I want to talk about a rather controversial topic that has been in the news a lot lately and really divides people: Abortion.

Firstly, let me tell you what sparked this post off. Viral blogger and Queen of general awesomeness Constance Hall posted on her Facebook page about the right to have an abortion after comments made by Donald Trump over being Pro-life, and his determination to make abortion illegal under certain terms. In her usual style it was hilarious, poignant and down right fab. In the usual style of the internet it sparked off a host of sancitmummies and anti-abortion hatred, with the pro-birthers hopping on to it within minutes. It also inspired a lot of people to stand up and say, “You know what, back off my rights”. That is what an abortion is at the end of the day; a woman’s right.

Echoing the sentiment from Constance, I feel that it’s so important to shout from the roof tops about how this is a WOMANS right and until you can carry a baby in your body, your opinion is about as relevant as a fart in the wind. The old saying “it takes two to make a baby” started to fly around the comment section while I was making like Michael Jackson with his popcorn in my slippers watching Game of Thrones. We all know that is true, but hold up, how many people does it take to be pregnant? How about labour? How about die during childbirth or due to unforeseen complications? One. Now how many of them are sporting a pair of balls? None.

Abortion is, and will always be, a woman’s issue, it isn’t about gender inequality it is rather to say that until the time a man can carry a pregnancy, be affected physically by a pregnancy and at potential risk from a pregnancy, he will never have a valid opinion or right to tell a woman whether or not she can have an abortion. He can’t. And yet, here we stand in a world where abortion is illegal in so many countries because  the MEN who run that country have passed a law that says they feel a foetus has more of a right than the woman whose body it is inhabiting. And yes, I say foetus because, like it or not, that is what it is, it has no rights until it lives independently of it’s mother’s body, otherwise you strip the mother of HER rights, in place of something that, without her, wouldn’t exist.

I posted this image on instagram earlier in the week and it (as expected) received a mixed bag of comments but the general consensus from “pro-lifers” was that you could always just “not get pregnant”, “use contraception” etc. Abortion is not exclusive as a form of contraception by miscreant teens who had a quickie without a condom, but frequently it is a decision made by women with families already because their contraception has failed, because they have been raped, because their health may be jeopardised if they continue with the pregnancy. No one has the right to tell a woman what comes out of her body, in the same way that no one can tell a woman what should go INTO her body. Life isn’t as neat as we may wish it to be, and while in an ideal world people would simply “not get pregnant” it doesn’t work that way. What’s more, it’s generally launched around that a woman should use contraception instead of abort, but what about the man? Ever wondered why no one has ever invented the male pill or or an injection that neutralises sperm? Yeah, me too.

There is such a misconception spread about abortion / terminations because of pro-life propaganda, something that I find I really struggle with. It is one thing to feel in your heart that you would never be able to have an abortion, a thought process that I believe to be valid and respect as someone’s opinion, but to then project those feelings on to another person’s body is a way of making them something less than human. Aren’t you tired of being less, ladies? Aren’t you tired of a patriarchal society that actively encourages women vs women attitudes and makes women LESS? I am.