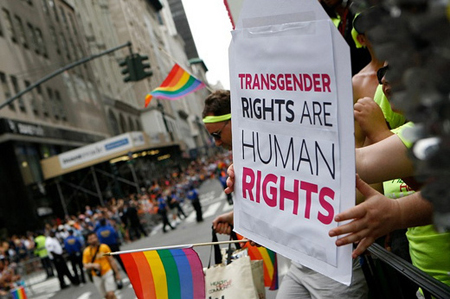 I’ve been reading a lot of stuff about transgender discrimination of late, specifically after the issues they’re having over in America with new legislation to insist that trans people use the bathroom of their birth gender. It’s got me thinking really, when did we become so fucking pathetic?

Firstly, you can google transgender and find some pretty big, burly men who have vaginas – if you feel that a male is a natural predator, then you are going to fully shit yourself if he waltzes into your female bathroom to have a wee, because, unless you sit on his knee in the cubical or pull some seriously dubious spy style shizang, there is no way you will know what genitals that person has. And nor should you. More to the point, nor should you care.

This, ladies and gents, is what is wrong with our world. The underlying assumption that trans people should stick in their own birth gender bathrooms is that males are predators. Take a second to think about that. Look at your sons. Are you raising them to be predators? Can they simply not be in a closed space with a female and not attack or rape her. I’m sorry guys but I’m calling bullshit. The truth is, this isn’t about protecting people anymore than victim shaming is about stopping rape culture. This is about discrimination, sexism and a whole lot of people who are too bigoted to think about what they are really saying to the future generations.

The issues that we face here, especially when paving the way for future generations, is that we are continuing a culture of making hate and discrimination acceptable, alongside promoting a “he can’t help it” attitude towards men and attacks they may place on women. I haven’t seen one person argue that the men’s bathroom is a dangerous place to go because, holy shit, a trans woman could be in there, lurking and perverted. Not one. I haven’t heard anyone claiming that their sons shouldn’t go into the bathroom because there could be someone in there who looks like a dude but has a vagina so they could be at risk of attack.

We need to stop. We need to stop this culture of acceptance that men are predators. They aren’t. Predators are predators, they come with vaginas, penises and a whole world of evil. They are not gender defined. As such, our bathrooms should’ve be either.

Answer me honestly girls, how many times have to visited the bathroom in a nightclub to find it chocka-block, and in your wine haze have thought, “nah fuck it, I’m gonna pee in the little boys room”? Were you a predator? No, you were a woman who didn’t want to que, had downed too much booze and needed to pee like a racehorse on a hot day.

I look at my husband, who stops to ask women if they need help lifting their buggy down a flight of stairs on the underground, who takes a camera off a mum of a child with special needs to get a picture of them as a family at the wrestling and I feel so sad to think that purely because of his gender he is labelled a predator. I worry that my boys will grow up to think they they can view women as something weak and for their pleasure or taking as opposed to an equal human being. At the end of the day, that is all we are really saying to people when we discriminate against transgender folks, that men are inherently dangerous and women are inherently weak – we are also telling our children that it is ok to look at someone who, god forbid, lives their life differently to the societal norm and label them as dangerous.

Do you want that for your child’s future?

At this point in our society I think gender neutral bathrooms really make more sense, after all, everyone’s shit smells.