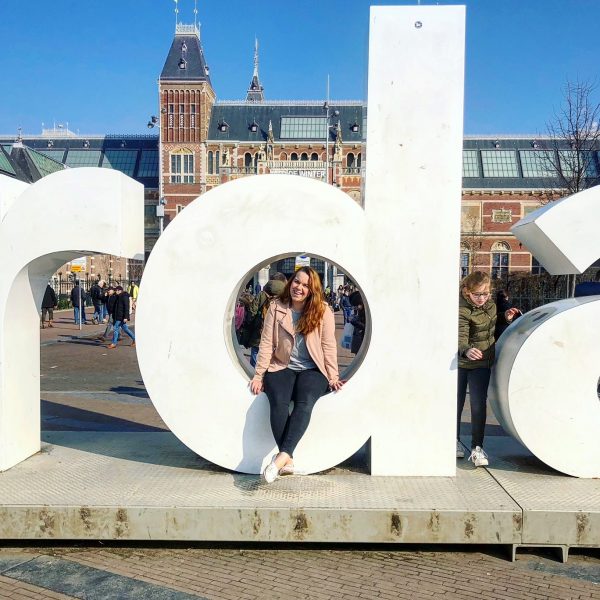 Amsterdam was, without a shadow of doubt, one of the highlights of my 2018 so far. I LOVED every minute of this mini break, this getaway. It was booked for my 29th birthday and it was something that I have been looking forward to ever since, not least of all because I was looking forward to spending a few days of adult time, just my husband and I, no children, no family, no friends, just us. It’s been a while since we have gone to bed in a foreign country and woken up as just us. It may well have been our baby moon when I was heavily pregnant with Reuben. Yes, it was.

With that in mind, it’s easy to see why A’dam was such an exciting prospect for us. I genuinely believe that, as a family of ﬁve, time away is pivotal to our marriage, and our sanity.

You can’t miss it. It was top of my list for wants and now it makes top of my list for things to do in Amsterdam. Honestly it was a place of deep insight, there was a sadness that was forever etched into the very soul of the building and a sense of real knowledge that here, in these walls were the reminders of our failings as a human race. You are given a hand held tour guide to listen to as you walk around, some of the rooms are harder to listen to that others, some bring out the wistful smile of a parent who identiﬁes with the actions of a child. A quote from an American visitor on the ﬁlm at the end summarised the whole place for me: “We like to think that this can never happen again, but this can happen again.”
It is one I wouldn’t miss, it is a place where you need to be respectful and aware that for some, this isn’t a trip to a place of history about something that we are disconnected from but perhaps a part of their familial history. Would I take the children? Probably not yet. I would say Reuben, maybe, but I will put to you that there was a small child throwing a temper tantrum in one of the upper rooms purely because they didn’t want to be there. Knowing what happened in that house, the pervading sadness of the Nazi regime, a child’s cries were hard to hear and I suspect that my children would have found the atmosphere overwhelming and distressing without really understanding what was happening and that might have been the case for the little one crying. 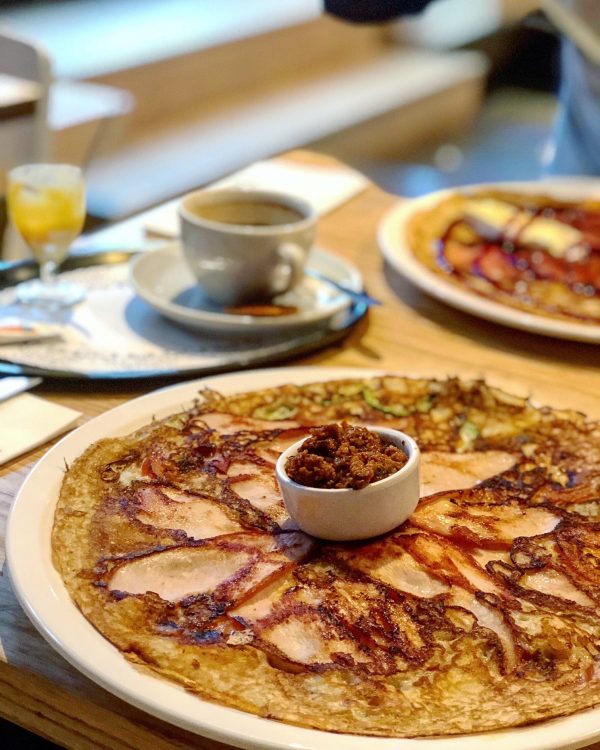 Go to the Pancake house just down the road. If you want savoury (I did) go for a Smoked chicken, zuccini (courgette), tomato and tomato tapinarde pancake OR a Camembert and ham one. If you want sweet, I have no personal recommendations as we didn’t try it but if it was even a ﬁfth as beautiful as the savoury then you will be laughing.

3.) ALSO BEFORE Anne Frank (again, or after) 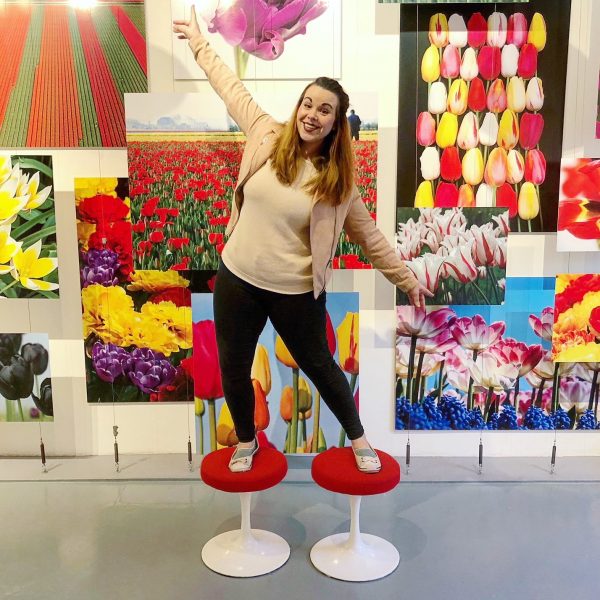 Pop into the Tulip museum. 5€ and it only takes around 30-45 mins to go around, but my gosh does it smell pretty and look beautiful. It was a really sweet little detour that taught us (me, Adam was bored stiﬀ) about Tulips and Dutch history. As you leave, if you are a fan of silk scarfs, get one here.

4.) Make a visit to the Icebar but don’t expect much 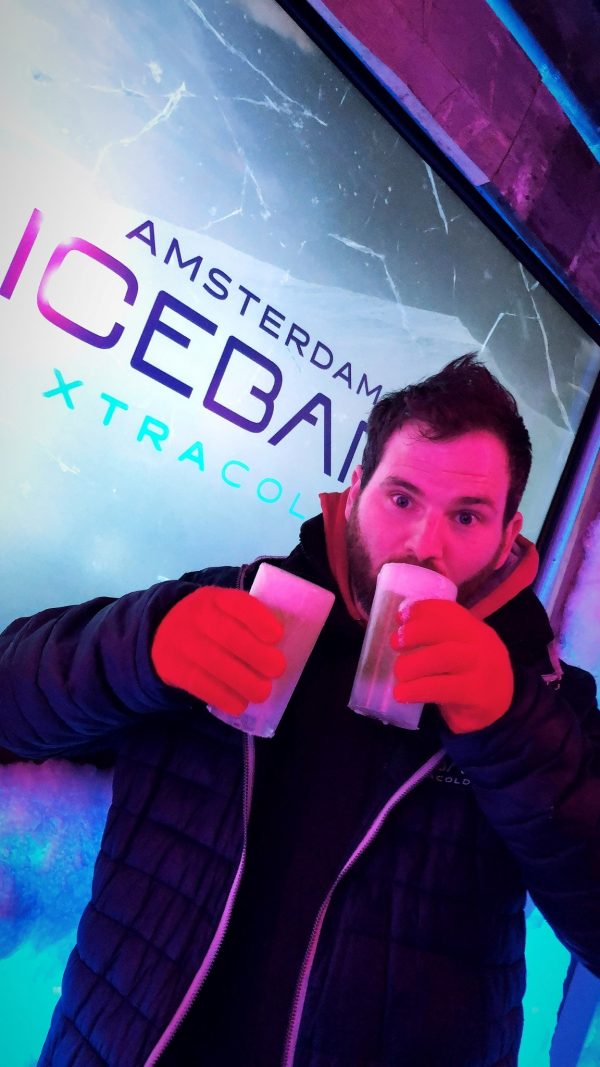 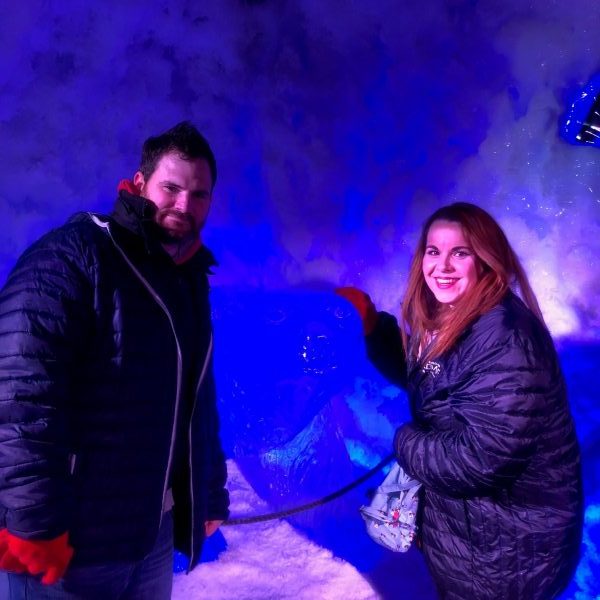 I mean it was a cool experience and I’m pleased we went but, yeah, I thought you could stay in the actual ice bar and buy drinks. You can’t. You have a 30min visit down there and then you come back up to the very basic bar upstairs. It’s not amazing, the cocktails are expensive and you can have a lager or shot downstairs. Meh. I enjoyed it for the experience but it wasn’t amazing! If we went to Amsterdam again, I wouldn’t go back.

5.) 100% Visit the A’Dam lookout and book dinner at the moon restaurant (but maybe not if you are fussy!) 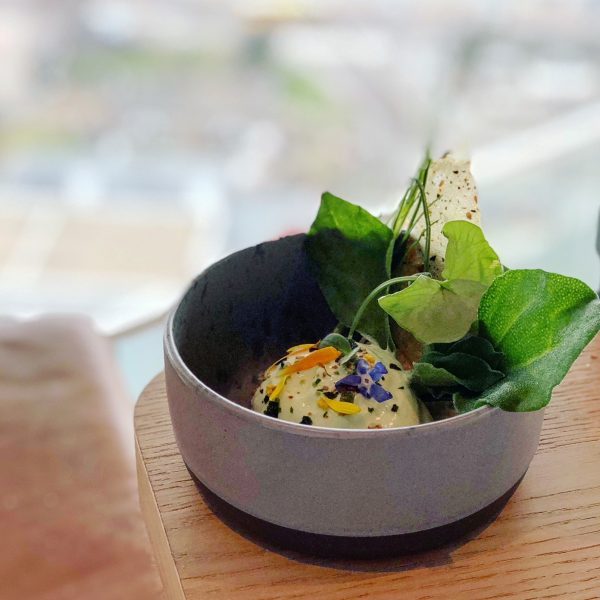 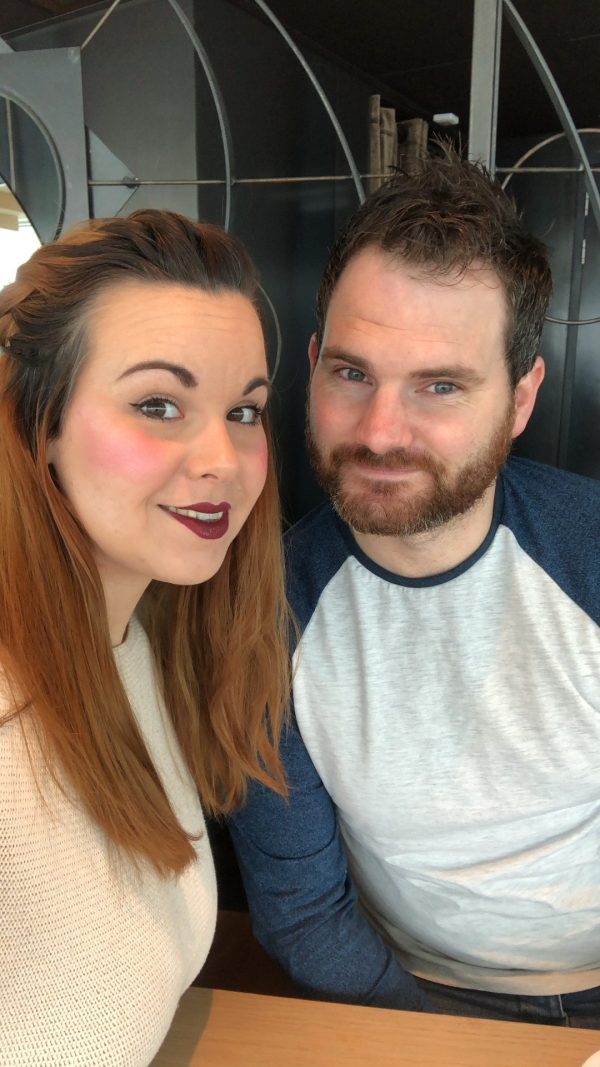 The A’Dam lookout is AWESOME! Honestly the views are stunning and you have to reach it by ferry which all adds to the thrill (ferry is free – watch out for crazy bikes and motorbikes). When you get there you need your camera out for the lift (which is super cool) and you need to prebook to eat in the rotating restaurant called the moon restaurant. There isn’t a menu in the A’Dam moon restaurant so if you’re fussy it might not be for the best. They do ask if there is anything you don’t like, can prepare a few options like ﬁsh, beef or vegetarian. Which meant that the chicken I wanted because I’m not a fan of beef or ﬁsh all the time was a bust. That being said it was still lush! The restaurant rotated all the way around, so slowly you’d never know, and it was EPIC. Ultimately, you’re paying for another experience and not the food. 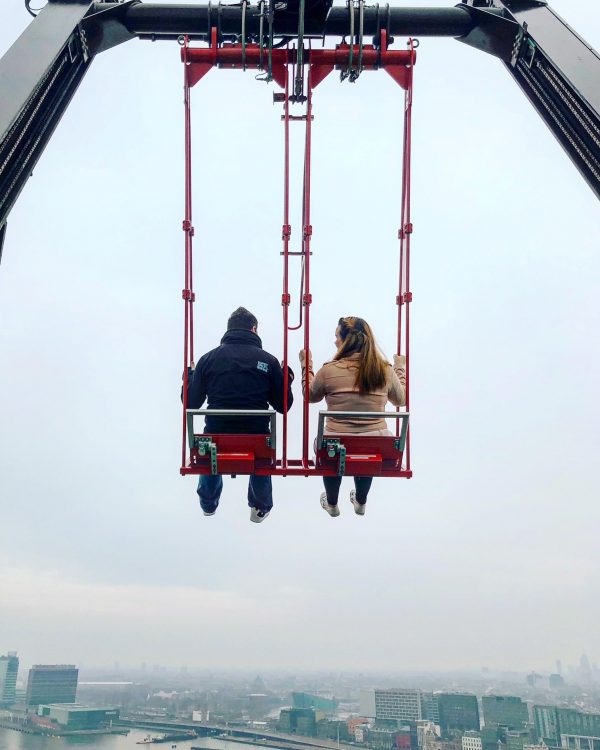 I know it looks terrifying and it is, but it’s AWESOME. So for those of you not in the know, the swing is at the top of A’Dam lookout and it is the highest swing in Europe. You literally swing out, with a belt (obvs) over the top of the tower. For those of you that like to make videos or take lots of snaps of your holidays, you can’t actually hold a camera whilst on the swing, so if you have a go pro, strap it to your chest! 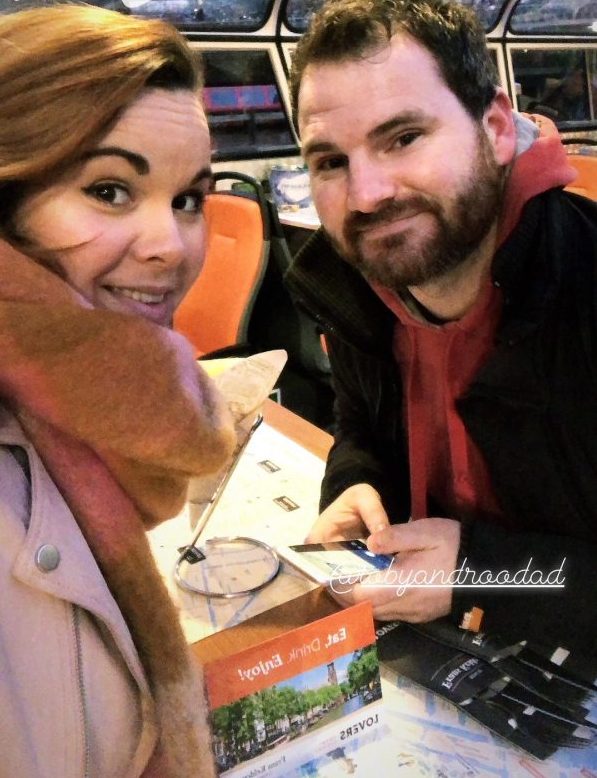 We did a Lovers Pizza (or burger) Canal cruise. We loved it! There were some really beautiful places that we got to see and take pictures of, but the back door was open and it was COLD! If you go in summer the opposite will be true, so dress appropriately. We literally didn’t take our coats oﬀ. Brr. The pizza wasn’t lush, I wasn’t impressed, but it was ok. I had the vegetarian version and Adam had the meat – the meat was lovely. Everyone tucked into their burgers so they certainly seemed to go down well and every table had two beers already on it, unlimited drinks and a take home bottle opener.

8.) When you get oﬀ the canal cruise, or away from the central station, go to the sex museum.

Do it. It. Is, hilarious. It’s honestly such a hoot and we were crying with laughter the whole way round. I don’t think I need to clarify for anyone that this isn’t a place for the kiddos, but ya never know! If you are easily oﬀended (you probably won’t be reading this blog…) don’t go. It’s hilarious because it’s graphic and sex is… well, it’s funny. 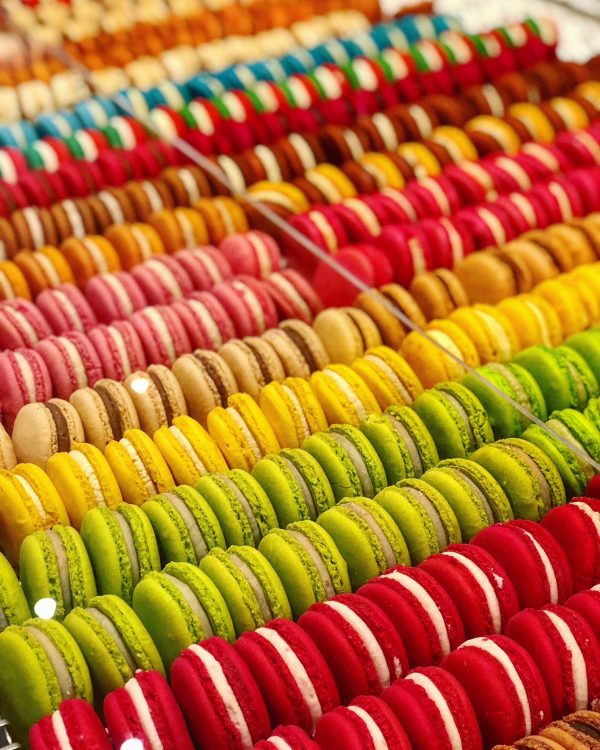 9.) Go to the Red Light District (and if you can stomach it, see a show)

The shows… this was a mixed bag. You know male strippers and how it’s seen as, not sexual but just funny? There aren’t really leering women or any sexual under current when you’re on a hen do and a male stripper comes out, or if you go to a show… it’s more… giggles. Raucous giggles. That is what a show seems to be like – in fact there were more women in there than men and the “performers” were really not taking it seriously and were having such a giggle with everyone. From the Banana show (oﬃcially the most magniﬁcently hilarious woman) to the pen woman who would sign a postcard from her… yeah… it was all taken with a giggle… leave before the live sex show. It’s depressing. That is when the sadder side of the red light district and I will write about that later in the week, but suﬃce to say it was sobering and it wasn’t met with any laugher or fun. So go if you think you will have a giggle, but leave early. It’s something you would probably do once, I wouldn’t want to go again.

10.) When you’re there, go to the Red Light District Museum of Prostitution.

Christ it was interesting. And sad. And interesting. I came out unsure whether these women were unhappy victims of circumstance and a patriarchal society or empowered entrepreneurs who had worked out that the oldest trade in the world is still pretty lucrative. I’m still leaning to option one but it makes you think. Also, if you’re with your (male) partner then ask them how they view the “punter” window which is electronic and shows you who looks in and what it’s like from behind the window for the women in them. I thought some of the characters were TERRIFYING and the men behind me thought they were “building their courage”. It highlights how diﬀerent the situation is for men and women.

11.) Go for a walk around the Museum square 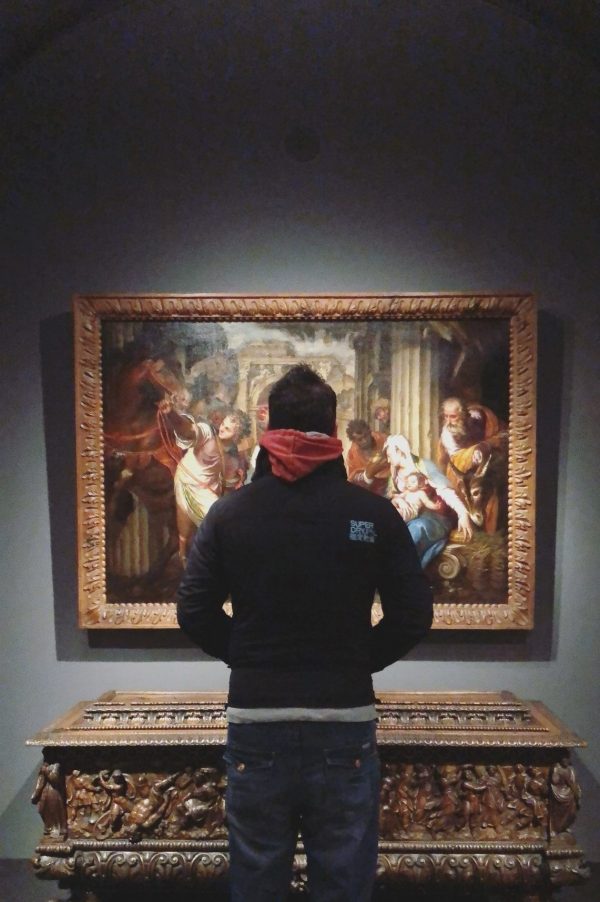 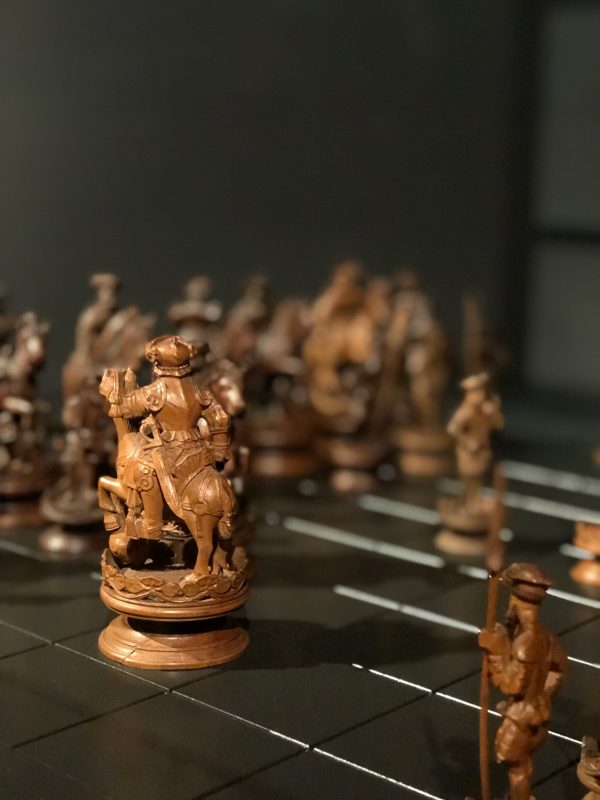 It’s amazing how many there are. There are so many museums/galleries. From Banksy to the nations Rjisk Museum – amazing! They aren’t cheap though – none of them, so if you want to visit more than one, book a pass on a touring site. It allows you entry to a few.

And that’s it! Those are my top 10 things to do in Amsterdam!