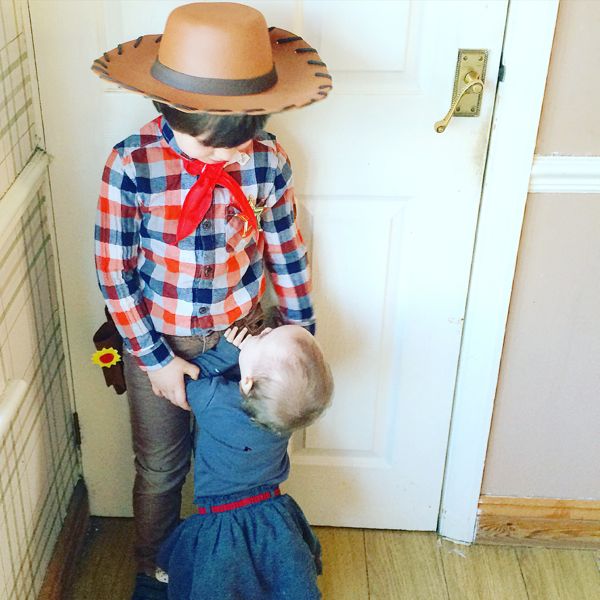 Reuben dressed as a Cow boy earlier in the week… He could be Mark Twain or Woody from Toy Story, who knows?!

While we were away on our holibobs it was World Book Day, something that almost every school comes out and celebrates, usually with a “dress as your favourite literary character” gig. I was waiting for the boys to finish their little morning play in the hot tub (which they now want at home by the way, cause that’s gonna happen) and having a browse of Facebook while I supervised them. I was loving all the adorable costumes, the kids looked so sweet and to be honest it did make me a little envious that we weren’t there to dress up and have some fun.

Toby would have wanted to dress up as The Gruffalo, of that I have no doubt, or at the very least the Fox, Owl or Snake… Not the mouse, he is in far to perilous situation for my little dude. Reuben, however, would be a bit of a tricky one to dress up. His favourite characters aren’t available to buy and my creative skills are as crap as Donald Trump’s politics. So as I was browsing I came across a good ole keyboard warrior style status from a girl I was really good friends with at school. This is what it said:

“Today is World Book Day, not World Fictional Character Day. If your child does not have a favourite literary character to dress up as you may want to stop using the tv as a babysitter and sit them down with a damn book for once. Yes I am being judgmental, I don’t care.”

I genuinely wasn’t sure whether to be offended or amused. Firstly, this particular girl isn’t a parent and I genuinely believe having an opinion on parenting when you aren’t a parent is like performing brain surgery when you have never been to medical school and are blind drunk – it’s going to end in a lot of people thinking very poorly of you and being pretty annoyed at your stupidity. Secondly, as soon as the status was posted, it was apparent that she’d upset a fair portion of her friends with one friend (who was an actual real life parent, you know, with a valid opinion) telling her that she was pretty sure she should rethink her very offensive status as she wouldn’t be the only parent given to thinking she was an absolute dick. Others sent a message to say they got her point but she would one day be made to eat her words and shouldn’t post something so nasty… Her defence? She was a bibliophile and as such it upset her to see people not grasping the true meaning of the day.

Geez. Bring out the big girl pants cos someone needs to pull em up.

Couple of things, after I wrote out a few wordy replies (which I ended up not sending because, was it worth it?), really made me want to write about this. She did have a point of sorts, but worded it very badly and came across as a great big fuckwit. The truth is, children should really have a literary character that they love BUT, here’s the kicker, what defines a literary character? We’re now at a point where every big selling book becomes a movie and there are a tonne of TV programmes and movies made into books. Reuben loves Roald Dahl, but his favourite books at the moment are probably centred around Transfomers, which are genuine books and comics, despite being adapted from a TV series. So who has the right to tell a child that their chosen book isn’t valid? No one. This girl used the example of “people who shove their kids in minion outfits” well, my kids have the Book of the Film for Despicable Me, Cars, Cars 2 and Monsters Inc. So already, that’s beginning to look like an invalid argument and something that is pretty ignorant.

On top of that, what if you have a child that likes the Gruffalo, you have no time because you work 40 hours a week, the school lets you know on Monday what they want for Wednesday (happened to at least three friends) and you genuinely can’t afford to order that Amazon costume that costs £70 with its fancy purple prickles and knobbly knees for next day delivery, then what do you do? You can ask your child if they want to go in some slapped together outfit that consists of a couple of your old brown tshirts hastily stitched together and a bit of rum looking face paint OR you can send them in the Teenage Mutant Ninja Turtle outfit that you bought 5 months ago on a whim and hope they will be comfy.

If that isn’t enough to put a cork in Miss Judgy-Pants, then I would pay decent money to see her come over and tell any four year old that they can’t go to school dressed as their favourite character (who may or may not be from a book) because, well, she’s a bibliophile and it upsets her. I’m pretty confident Reuben would be strongly thinking a couple of my favourite words that he knows he’s not allowed to use whilst donning his Transformer’s BumbleBee outfit (AND watching reruns on the TV… Because that’s his babysitter didn’t you know?)

So what are your thoughts? Do you agree that this is all just another way to pick at parents and is a bit pointless, or do you think she’s absolutely right, we should ban any characters that aren’t from books? Another alternative of course is to do away with the fancy dress altogether and go back to a time when kids just brought their favourite book to school to read with the class but where’s the fun in that? (unless you’re a bibliophile…)