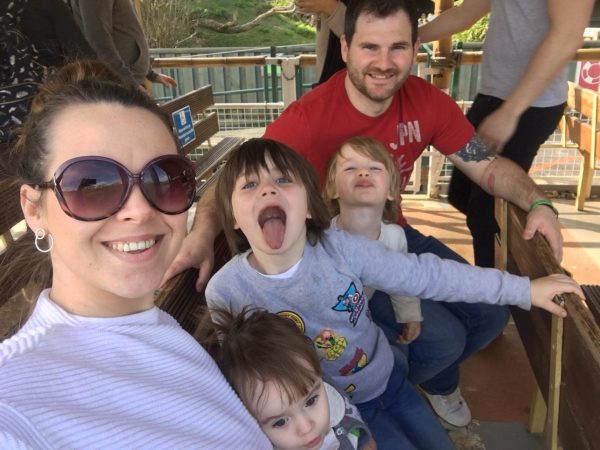 A couple of days ago Adam and I sat down on the sofa, after an especially tough night with the kids, wondering what mind numbing bollocks to chuck on the telly while we tried to have 20 mins of peace to chill out after both working all day and having to wrangle small children into the land of nod.

Anyhoo, we didn’t choose wisely. I think Adam saw “Rio Ferdinand” and just thought, meh, I like football, he’s a footballer, this could be interesting… and it was interesting and engaging, but light, mindless TV it was not. It was heartbreaking.

For those that haven’t heard the media buzz around the TV show, it’s about Rio Ferdinand, former England footballer, and how he is coming to terms with his wife dying last year. It was hard to watch but inspiring to see a man who clearly cares so deeply for his family and is doing the best he can to care for his children in the aftermath of the loss of their mum and his wife. As a man who has worked full time, above and beyond what most of us do, his wife was the one who organised everything, who held the family together while he went out and made the moola. The change in circumstance is shocking and hard, oh so hard.

In our family dynamic, despite working as many (if not more) hours than Adam, I tend to be the one that organises everything, who keeps a schedule for the family, makes the plans for days out, school trips and flexes work when I really can’t afford to in order to make it to the kids events etc. To clarify this is in ABSOLUTELY no way because Adam is incapable – Adam is, without a shadow of doubt, the most wonderful father and were I to leave this mortal plane, he would be the most wonderful solo parent until he found the right partner. It’s more because of my flexibility and because, well, I’ve always just assumed that role (read: control freak). I guess watching Rio and him talking about his wife, about his inability to move on and grieve properly, left me feeling sick and like it’s something that Adam and I needed to talk about. What if he feels that way should something happen to me? What if he falls into the “I must be tough” bullshittery that so many men have? I know my husband and this is 100% the way he would go – not because he’s cold or uncaring, but because it’s a front, a way to protect himself and (in his male mind) his children.

I tested the waters a bit and, like usual, was met with a hostility that screamed “I do not want to talk about this”… but at the end of the day, you don’t have a choice. We’re all going to die, we’ve all got a ticket to punch and it needs to be talked about.

I understand Adam’s reluctance to discuss anything happening to me, I’m very practical so don’t have the same issue talking about something happening to him – I’m a chronic planner so I have us insured up to the hilt, and I have plans and ideas of exactly what I will need to do – whether that would transpire at the time I’m not sure but I think I’ve planned enough that people could help me keep things together. I hope. One area I can’t talk about myself, and even typing it I can feel the lump in my throat and the icy, withered hand of fear around my heart, is what we would do if something happened to the children. I do stand firm that it is SO important to talk about your wishes and expectations should something happen to you though, especially with your spouse.

I have told Adam that if something happens to me I want him, or rather NEED him, to be open with his grief for the children. I don’t want him to bottle it up and try to be strong as men are so often taught to be – something that I think Rio touched on in his documentary. He was so busy being strong for everyone that he really couldn’t grieve and because of that, he couldn’t really communicate with his kids in the way that HE wanted to. He was open about his regret over not being more verbose with his wife in the short time that they had from finding out that she was terminal. It’s not that I want to think my husband will sit at my funeral like a nervous wreck, something he said that he wouldn’t feel able to do as it invites interference from older female relatives (not just mums – whose help would no doubt be welcomed, but rather from people who feel men can’t cope alone), but rather that I want him to be able to express with the children that he is sad, sit and have a cry and move on. To help them move on.

Death is something we’re so afraid of, but is it something to be afraid to talk about? No. Get loquacious people (any excuse to use that beast of a word).