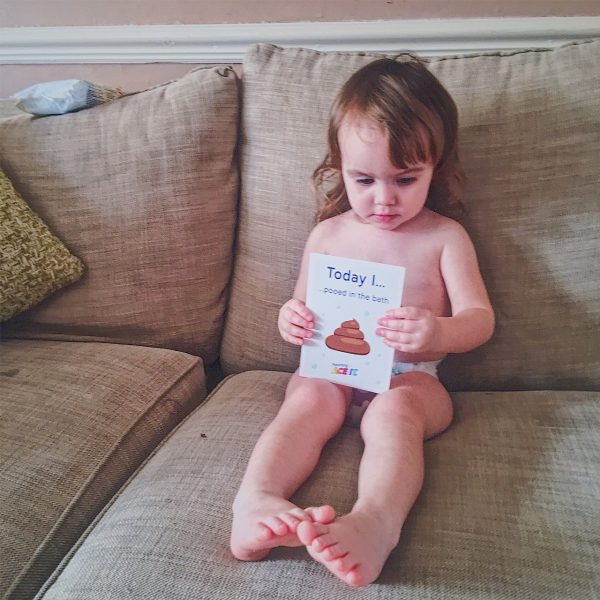 Something has been happening in our home… we’ve been invaded by a bath-pooping, green paint wearing monster who hates to sleep. It’s is none other than Miss Edith Rose herself.

I don’t know if it is just the mischievous side of her or what it is but last week when Ace sent me some of their super cute milestone cards and laundry products, I don’t think I have ever been more relieved in my life! Let’s have a look at what has happened over the last two weeks in relation to the cards:

Today I… pooed in the bath. – Check

Today I… refused to eat anything but snacks. DOUBLE CHECK.

Today I… refused to sleep through the night, again. TRIPLE CHECK.

Today I… broke my record for longest tantrum. Just give me all the checks.

It’s honestly like this cute little pack of cards was written on some kind of fly on the wall experience of life with Edith Rose. We’re coming to that point where she wants to be independent and wants to have a bit more control over what she does, but she just can’t do it alone. It’s what most people would call the ultimate in frustration nation – daily tantrums, daily arguments with a person that comes up to your knee and can’t be reasoned with… not to mention constant mess.

I’m not moaning here by the way, it might be one of the most challenging times of parenthood but I also happen to think it’s one of the most fun. Edith has started shouting “poooooo” in random places when she’s filled her nappy which fills everyone with childish chuckles, or her tiger impressions which are endearing – just the little quirks of her personality that are really beginning to shine through properly now. One of the things that I am finding quite tough about parenting the little madam is that with her new found quirks comes learning how to deal with her when she is frustrated and overwhelmed (like when I didn’t understand her pleas for Nowaaa – what the hell is nowaaa). On top of that learning how to deal with the judgement of other parents and the general public can be so difficult and I’m convinced it’s one of the reasons that we have the phrase terrible twos – because often the people around you, and the toddler before you, make you feel TERRIBLE. I’ve written before about judgement but you will never know it so prominent as when your 6 year old shouts “Mummmmm she bit me because I wouldn’t give her the kindle” in the middle of Asda coffee shop while the toddler plays bucking broncho on the floor (see aforementioned tantrum card – I swear I could just pin that to her back and be done with it).

It must be frustrating for a child though? Not being understood but suddenly having a better comprehension of what is happening around them, and again tempting for a child to manipulate that. Can you imagine wanting something really badly, unable to get it yourself and then having to rely on your minion who provides you with milk but doesn’t grasp a simple command like “Nowaaa”… neither can I, must be tough.

What would you put on a toddler milestone card if you had one?