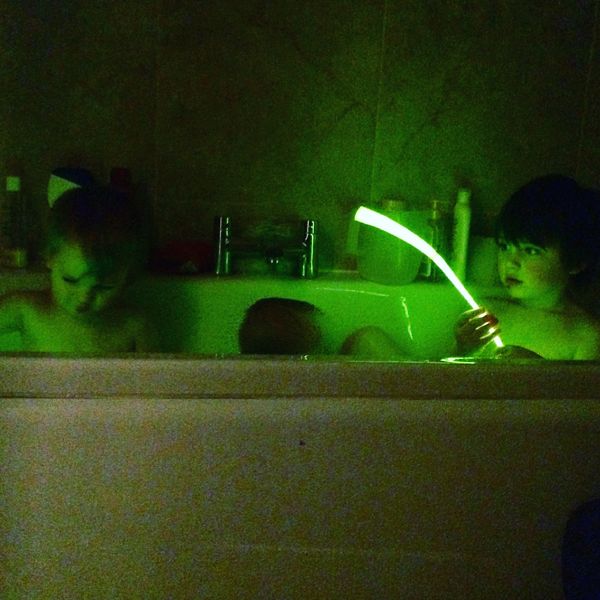 Last week I posted a picture of my kids in a glow in the dark bath and loads of people loved the idea. I had quite a few emails and messages on Facebook from people asking me how on earth I had done it. The truth is, I cheated!! That’s right folks, I didn’t use some fancy pants UV light or chemicals that look fun but might leave the kids slightly tinged. Nope, I used good ole fashioned glow sticks.

The boys had the most amazing bath time and have asked me for a glow in the dark bath each and every night since. Which is lovely because bathing had become a bit of a ball ache in our house. It signifies the end of play and beginning of the bedtime routine so they meet it with grumpy faces and attitudes that most teens would be envious of. By simply adding glow sticks we had a blast.

I also made a little story up for the boys, building up the fun. I ran the bath, then sent them away while I cracked the glow sticks and turned off the lights. As I stepped out into the hall I closed the doors and called the boys over in my oh-my-goodness-look-at-this voice. I told them to get prepared because, as I was running the bath, a couple of electric eels swam up the plug and the whole bath is glowing! They were so excited! Practically bouncing at the door… All for a bath and s £1 packet of glow sticks.

Give it a go with your children, make up a story you think they will like and do it!!

The other ideas for making bath time fun that we’ve tried are:

Adding lots of fish and giving the kids a bet.