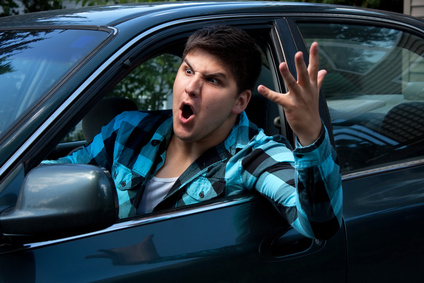 Dear Bully in the Car Park,

Normally your kind of behaviour wouldn’t bother me – seriously, I’m not the type of person to dwell on it, or let it spark a reaction. I certainly wouldn’t normally stoop to your level and flip you off while hurling abuse, it’s just not my style and I’m ashamed to admit that I let you get to me just enough to spark me off and illicit that response. You’re just another asshole and you didn’t deserve it from me, but, like all good bloggers, I’m going to write an open letter and tell you why it happened.

I saw you a few times as I was walking around the supermarket with my kids and Mum, I heard you too, cursing at your child and putting your partner down. I’ll admit, I couldn’t help but think you were a creep and you hadn’t done anything to me at that point, I just didn’t like the way you were belittling your partner or the spiteful words you chucked at your child. I had you pegged at that point as another one of life’s idiots, a small man who makes himself feel bigger by picking on others, especially when they are smaller than you… bravo, macho man, aren’t you hard. See, I used to teach martial arts, I’ve met my fair share of men like you and it rolls off my back now, as long as you don’t bother me and mine, you’re just another fly in the ointment of life.

Maybe I’m being unfair – you seemed tense, were you tense? You might have been a lovely guy, having a bloody awful day, I know the feeling… there was just something in your walk and your wife beater vest with unzipped Helly Hansen hoodie that suggested otherwise. At least you were tough enough to man the cold in just that huh?

I’m digressing, I know. You didn’t even realise that you barged past me and my baby in the trolley, which was full of shopping, nearly knocking us into a car in the car park. Your partner told you, but you chucked a look at me (because it was my fault for being in the way right?) and told her to “shut your mouth and get in the car”. Nice touch dude. Muttering something about misogynistic assholes under my breath, I walked on by and got to the car. My mum kindly went to put the trolley back in the bay by the doors and I loaded up the car and put the kids in, strapping them in tight like usual. Mum has arthritis you know, and it plays up really badly in the cold weather, so I thought I would pull around the corner and pick her up at the doors – I don’t usually because we wouldn’t want to be an inconvenience and block people in, but mum was already walking back so it wouldn’t take more than a couple of seconds at best. So I did. I pulled up, stopped and she immediately jumped in the car.

That was when you pushed it a touch too far – you pulled up behind me, at which point she was already climbing in the car, and started banging on your horn. Why? It was pointless! We weren’t causing any trouble and you weren’t going to be delayed hardly at all – in fact, you had to stop for the couple who were waiting at the zebra crossing that we were stopped at. So what the fuck was your deal?

I’ll tell you what your deal was (and FYI this is why I saw red) you saw a young woman with children and an older woman… no man there to protect them huh? So you thought you’d do what you clearly do best – intimidate and threaten what you perceive to be ‘weaker’ people.

That really upset me. It honestly, truly did. I deplore men like you, you epitomise everything I want my children to avoid – you are a bully and a sub species of human. Had my six foot four husband been there, you wouldn’t have dared, you would have stayed under your rock hurling your absurd abuse at your own partner and child. Sadly for you, I’m not the type of woman to be intimidated. I’m not your doormat buddy, and I think it shocked you that I go out of the car and told you to go fuck yourself.

It shocked me too. It’s not like me… you are, quite simply put, beneath me and any other decent person. It was just so unjust and after a week of unjustifiable hatred in the world, I just couldn’t bare it anymore so I threw back at you.

I’m sorry about that, more to myself than you. You weren’t worth it. I would like to say hopefully next time you want to get your macho on, and you think you can bully a couple of women for no reason, you will think twice, but I doubt it very much.

Your’s Not so Sincerely,

The woman who called you a Twunt in the car park yesterday.