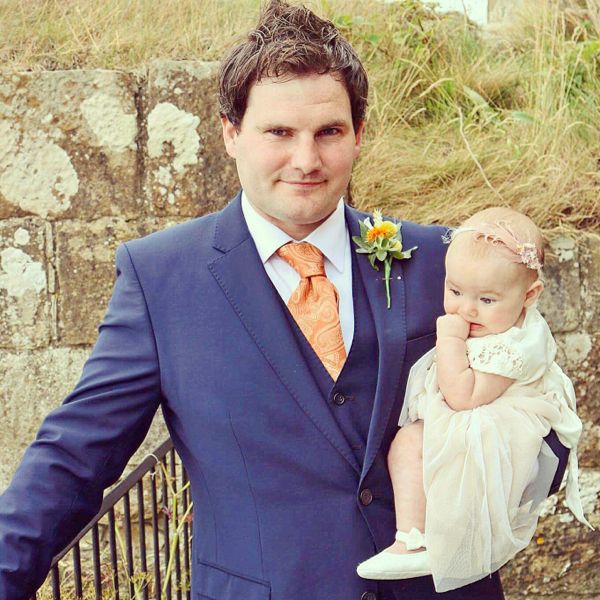 This is my husband with our youngest child Edith at our friend’s wedding a few weeks ago. He is very much a PARENT and NOT a babysitter.

Hello, calling the 21st century over here, the 1940’s called and they want their attitude back.

I’m a bit confused as to where we are at right now – are we, as women, trying to remove gender stereotypes or are we promoting them? It’s long been a running joke between women, especially mamas, that men don’t do anything around the house, don’t help with the baby, are lazy etc but really, how can we complain about the gender stereotyping that we face to then turn around and do the same thing to our partners? This has been bugging me quite a lot lately, because whenever I go out minus my troop of children, one of the most common questions I get asked is, ‘Oh, who has the kids?’ usually followed by, ‘Is Daddy babysitting today?’… um, no, Daddy is…. parenting!!

Look, I’m not guilt free when it comes to fuelling the stereotype, but you have to ask yourself; how can we expect men to take an active role in their children’s lives if we are always denying them the privilege or assuming that they don’t? When we first had Reuben my husband often slipped into the stereotype, he wouldn’t do nappies (nope, not kidding), wouldn’t baby carry and never put Reuben to bed. Was this because he wasn’t a good Daddy? No! This was because we each had our own little role to play, and it was a comfortable one that we both enjoyed – plus with shift work, there was no way Adam could put Roo to bed, it wouldn’t work. Now, years later and with 3 children, things are so different. Adam will frequently have a ‘boys day’ with the kids whilst I have a girlie day out with my mum or friends, he often goes upstairs and showers/baths the boys and even puts them to bed on occasion – although that never really works because they think Daddy is the king of playtime and just want to giggle when they see him. We are a team, thats how parenting works. I’m not saying it does for everyone and I’m very lucky to have a man who wants to be a great Daddy, but if you really think about it, are your partners really the ‘man-child’ that stereotypes say they are, or are they just normal people with flaws and strengths?

I just feel like we shame our partners all the time, we really do. On the internet, at the play park, at the school gates, and we all do it because it’s the stereotype and it’s become the norm. That being said, I can’t tell you how many times I’ve heard people say ‘house husband’ or ‘stay at home dad’ as a derogatory slur or insinuated that to be such is to be a lazy guy who doesn’t pull his weight! Are we kidding here? So what, we want men to be actively involved in their children’s lives but not to the extent where they are the primary care-giver because that is the woman’s role… can you hear the 1940’s?? Can you??

I’m not saying we can’t have a good moan, it’s healthy to do so and believe me there is always plenty to moan about when you have a partner, it wouldn’t be normal if you didn’t find things about each other frustrating. That being said, this whole “all men are lazy, absent father’s” thing that memes like the one above encourage – it’s just not cool and it’s not part of the 21st century.