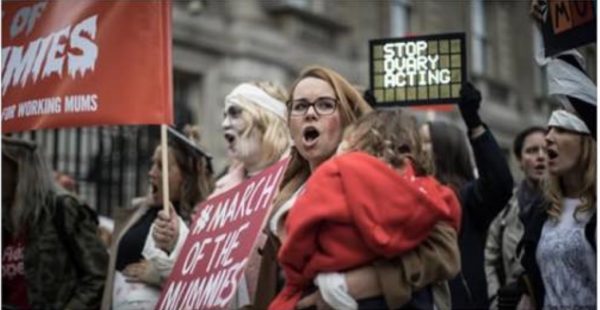 Throwing it straight off the bat, I’ve always been privileged. I find people who refuse to acknowledge their privilege to be intensely frustrating. I have been very privileged compared to a lot of women when it has come to my mother’s rights, to women’s rights.

When I had Reuben I was in a position where both my mum and my husband were there to help me, emotionally and financially. There to offer me the support that I truly needed, though I really had little choice but to go back to work. The same was true for when I had Toby, though by the time Edith rocked up I was disillusioned with my situation. My mum had retired and it never sat well with me that she helped Adam and I financially – we were equal partners to a degree by this point, but I really feels like it is my responsibility to repay all the years she looked after me. To make it so that she isn’t required to work, isn’t struggling for that cold hard dollar we all need more of. I have never been a settler and I seriously considered pushing myself into management within my retail sector job… but what was the point?

As a retail assistant I earned £398 per month, working part time. The over time was amazing before I had the children, but after? All but gone, heading off in favour of younger people with not a whiff of obligations, no potential phone calls to say the kids are vombombing the place and no uterus invasions. So what about pulling my weight a bit more and cracking on with a full time contract? Chance would be a fine thing. Like most retail companies, it’s all about the 0hr contracts now and getting a 30hr+ contract was like trying to extract cooperation from a toddler. Surely management would be different though? Well, management would take my wage to an initial £462 per month still on that 16hr contract, however I would need to put in some overtime to train. Once the training was done? Say goodbye to the overtime. Steadily I could build up, apply for a management position that would be full time and earn a more decent wage – except that meant a total loss of time with my children as management roles were few and far between meaning all this extra responsibility could be wasted – and if it wasn’t, I would have to work full time, possibly 6 days a week with little to no flexibility whatsoever, fibbing about dental appointments so that I could go and watch the school nativity.

So them’s the options:

Pretty depressing and what’s more, not only is it not an uncommon story but it’s also not a particularly bad one. Compared to the tales that 54,000 women every year can tell, I’ve gotten off pretty damn light.

This is one of several reasons that you are reading this blog, one of several reasons and dare I say possibly the most important reason, that Toby&Roo exists. I borrowed £500 from my mum to pay someone to create a website for me, I set up social media platforms and I started to write. I started to grow, working in my lunch break, promoting myself during bath time and when I went on Mat leave with Edith, earning roughly £80 per month from the blog I threw everything I had at it. Everything. I worked until that £80 became £800 and then £8000 and by the time mat leave was up for her, I didn’t go back.

The point to this is that I shouldn’t have had to create my own career and it isn’t something that everyone can do. Not everyone can pay for electricity that runs 24/7, wifi, smartphones, £500 to start. It’s from my privilege that I had the luxury to work hard and create this… and therein lies the fundamental flaw that is becoming common place in our society: it’s become a privilege to work hard and thrive in your career if you are a mother. 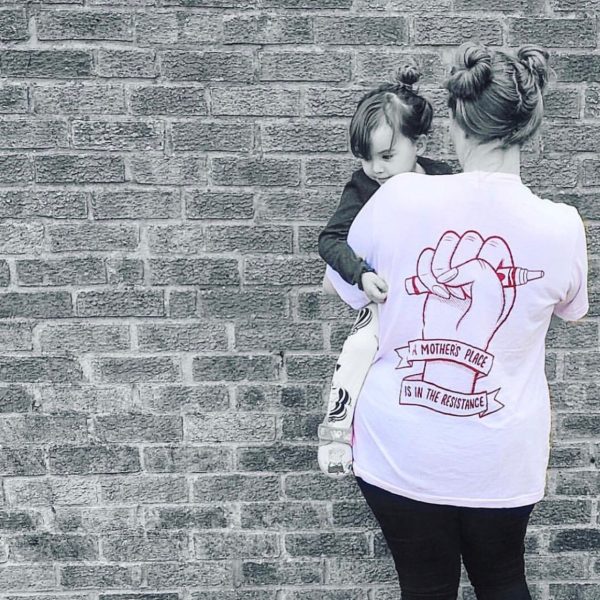 A few weeks ago Edith and I went down to London to support the Pregnant then Screwed March of the Mummies. The march was a protest of the archaic employment laws that allow employers to discriminate against mothers (and fathers – though I will come to that in a moment.) Employment laws that defy women’s rights left, right and centre, purely by opening the doorway for employers to take advantage of pregnant women and push mothers out of the workplace.

The campaign is spearheaded by Joeli, an amazing woman who was already in that higher flying position who was dismissed whilst on maternity leave because her position “ceased to be relevant” despite the fact that it was relevant and was being filled elsewhere, another oh-so-common story. They are asking for 5 very reasonable things from the government all of which will make lives for parents, grandparents, friends, lovers, curtain twitchers etc easier and happier.

1.)   Increase the time limit to raise a tribunal claim from 3 months to (at least) 6 months.

3 months when you have a newborn, you’re ill, you’re dealing with HG (which we all know about naturally because Princess Kate has had it – so it’s a thing now, not just lazy morning sickness sufferers) is not enough time. It’s just not. How can we even think it is?

2.)   Require companies to report on how many flexible working requests are made and how many are granted.

We don’t require companies to report how many flex requests they get or grant. So whilst Mr CEO is presenting the board with their grand flexible working plan and telling everyone how amazeballs their company is, they are doing fuck all to help the staff who actually matter. Not because it’s not viable – we’ve proved it’s viable, but because it’s just not done.

When I was pregnant with Edith, Adam went into work to speak to his employers and let them know. Rather than the usual congrats or “well that’s spiffing” he was told, “how will that effect us? I mean, she’s the one that needs time off and such. You don’t. I didn’t have any time off at all – in fact, I don’t understand this modern thing, I had a couple of hours for the birth and went back to work.” Naturally Adam informed them that under our current law he could take a year if he wanted, it was his right, but it was made expressly clear that he wouldn’t have a job to return to and his paternity leave would be a begrudgingly gifted 2 weeks or he was out. I shit you not.

4.)   Give the self-employed access to statutory shared parental pay.

Howdy, I’m Harriet and I’m self employed. I’m a cat owner, a tax payer and I even own a house… however should my ovaries get twitchy and my uterus invaded I will be up shit creak with whatever paddle I’ve saved up for myself and a rather piss poor pay out from the government. If I was a man I wouldn’t be entitled to any paternity pay, not a penny. Did I mention that tax I pay?

5.)   Subsidise childcare from 6 months old, rather than 3 years.

Did you know the UK has the highest childcare costs IN THE WORLD. In the world people. There is a reason that we are forced out of work and more often than not, if you’re employed hasn’t been a total wankpuffin and sacked you, you have to make the choice between working to earn money to pay someone to look after your child and potentially have £1.28 left for those pesky emergencies or you have to give up work and stay at home to look after you’re child until they are 3 and he government will subsidise the childcare – at which point the nursery where your child is being cared for will get shafted because they will need to cover the costs of the subsidy that just doesn’t cut it.

Nothing there is unreasonable or asking too much.

UK, we can do better than this. We can. Why are we forcing people into the choice between work and kids, motherhood shouldn’t have to come with the crotch grope that is forced benefits and societal stigma. We shouldn’t have people working 37.5hrs a week in professions that they have works for 3years+ at uni to qualify for suddenly gifted with the choice of a payday loan to cover emergencies because their wage doesn’t cover their mortgage and their childcare costs.

I know a few of you will probably be reading this thinking “well get your ducks in line love. You are capable. Don’t have kids until you can afford them!” But life isn’t always that simple – not to mention that you would *think* a solicitor would be able to afford her child wouldn’t you? Yet she can’t because she’s been sacked the week after her pregnancy announcement and is so ill with HG that she ran out of time to process the complaint and raise the tribunal.

In short, we need to do better. Flexible working works, and treating people like they are still valuable after project procreation works better than the current system.