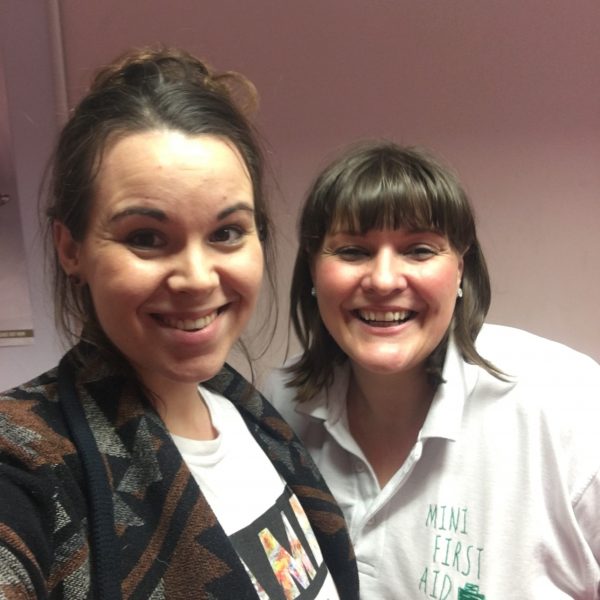 It’s one of the biggest fears that plagues any parent; something happening to your child that you can’t prevent. It brings a tingle to your palms, hitches your breathing to make you feel like you’re suffocating and creates the neurotic eye twitch that I’ve often joked about. Yet, it’s not a joke this time.

I live in a house with one first aider and one former nurse. I’ve even done a basic baby first aid training course myself, but I couldn’t tell you much about meningitis, the numbers for CPR in children or the way to hold a baby if they are recovering from a choking incident.

Last week I was asked to go along to a Mini First Aid course in my local area of York, and I was excited about the prospect of going and meeting Michele who ran the course, but to be totally blunt, I was a little skeptical. I mean, I’m a mother of 3… I sort of know my stuff, and the numbers for CPR aren’t really that crucial. It’s breath and pump with two fingers for a baby. I could manage that.

Along I tootle to the class, full of expectation that I would have a good giggle but wouldn’t take home much I didn’t already know – but I hold my mitts up, I was WRONG! There is SO much I don’t know. So so much. The course covered several sections:

•   CPR – both babies and older children

•   Bleeding – both heavy and mild

I think for me, the most eye opening sections were the CPR, burns and meningitis.

Practising CPR on a dummy baby and a dummy child was eye opening and something that every parent, or even person, should be asked to do. I have never practiced before, and I think that made a huge difference to the way I viewed the process – I mean, it isn’t a hard thing to do right? Yet it really IS! It’s super hard, after a minute of pumping away on a child I was knackered, and with the average response time being 11minutes, you can only imagine how pooped you really would be.

When it came to burns, I was so surprised to learn that the treatment for burns, irrespective of how severe the burn, is the same. I had two personal thoughts on burns – one was my husband telling me to run my hand under the cold tap for 10mins when I burnt it on the oven door. I remember telling him that a minute or two was fine, ten was just silly. Turns out he was right!! The second thought I’ve always carried with me is my mum and her words of warning about burns and children. As a nurse she spent time working on the burns unit and funnily it is the one unit she simply won’t talk about it. She has mentioned one or two cases over the years, but generally speaking she shakes her head and tells me it’s a period of time she tries to forget, simply because so few people know how to respond to a burn in the first instance that it is often so terrible and deep once aid is there. People often wrapped burns in cloth, yet this is the WORST thing to do.

I think my experience with Mini First Aid has made me feel rather passionate about encouraging as many parents as possible to sign up for a course. I’m also passionate about supporting their children’s classes as I truly believe that First Aid should be a part of the national curriculum. If more people knew how to carry out BASIC First Aid, we could save so so many more lives. Michele saved her daughter’s life when she was choking and THAT is why she signed on to become a Mini First Aid trainer. That is why she signed on to teach other’s how to save lives because sometimes, you’re the only one there.

I implore you, no matter how much you think you know – if you’re like me, a mum of 3 who did basic baby first aid as part of a council funded baby centre class 6 years ago – you won’t know everything but you might just learn something that will mean EVERYTHING one day.