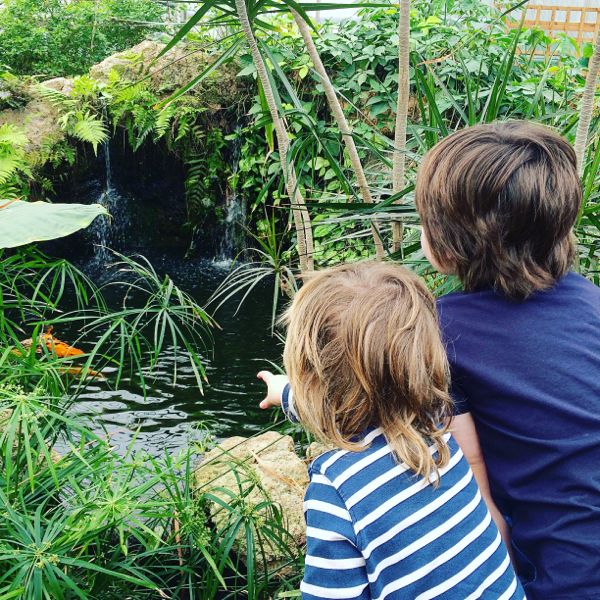 As you can see Toby is sporting a rather unkempt look – but it’s clean, it’s combed and it’s HIS hair.

Hooray for Spring! All of a sudden it seems to be warmer, brighter and just downright lovely. Which is great and all but it has led to one big fat disagreement in our house over: Hair.

Now, as you probably know if you follow the blog, I am a firm believe that a child’s body is THEIR body, totally up to them what they do with it within certain safety and hygiene boundaries. This applies to their hair in my mind, OK? So, if a child doesn’t want their hair cutting, provided they are willing to have it combed, nit combed and treated, and it’s not impairing their eye sight or anything else, it’s up to them how to have it.

Adam calls this (and I quote) “new age parenting bullshit that means the adult gets to shirk their responsibility – it’s your job to tell them what to do with their hair”. He’s a sensitive soul and so considerate with his words.

The argument that we have come to us that we should have the boy’s hair cut, which they do NOT want, because the weather is getting hotter, we have to treat and comb them for bits at least twice a week and it’s easier if we are only doing it on short hair. My argument is that their hair is not in their eyes, they understand longer hair takes a time to brush through and nit comb (which is a bitch) and they will have to have that done. When their fringe grows, it gets cut so it isn’t in their eyes – there for it doesn’t impact their sight of health. Anything else is irrelevant.

Adam’s main point (other than the fact that I am a “new age parent”) is that they will be over heated, uncomfortable and therefore more likely to struggle with hygiene in the summer. I’ve put it to him that this is something he is considering for his sons – but won’t dream of for his daughter. He says his daughter will have her hair up (which the boys don’t want) so it’s a moot point.

To me, it’s bloody well not. It’s a gender bias that he has been raised with through a society that believes boys have short hair and girls have long. When the time comes, if E wants her hair down, I don’t see why I would force her to have it up, but Adam refuses to see my point of view. We have a very outdated attitude towards the way genders should dress, act and be styled. The truth is, I love Roo’s longer hair, but Toby doesn’t suit it and it looks tatty half the time – it isn’t something for me to choose though.

Having spent ages in the hair dressers with a tiny Reuben, I can tell you there is NOTHING more awful that pinning your child down for a hair cut while they scream and cry – especially when it isn’t necessary. I’ve explained to both boys that the choice is theirs HOWEVER if I say it needs trimming on their fridge, it needs it. If I say they must have it cut because they won’t let me comb it – they don’t overrule that. They have a choice until I have to step in and be the parent for a reason that they are too young to control or prevent. They have choice because it’s their hair. Not mine.

I’ve told Adam that he can take them and cut their hair – something I’ve previously been lumped with – but I want no part in it. It is 100% up to them in my eyes. He will have to explain to them why he is so insistent it is happening and hopefully they will understand.