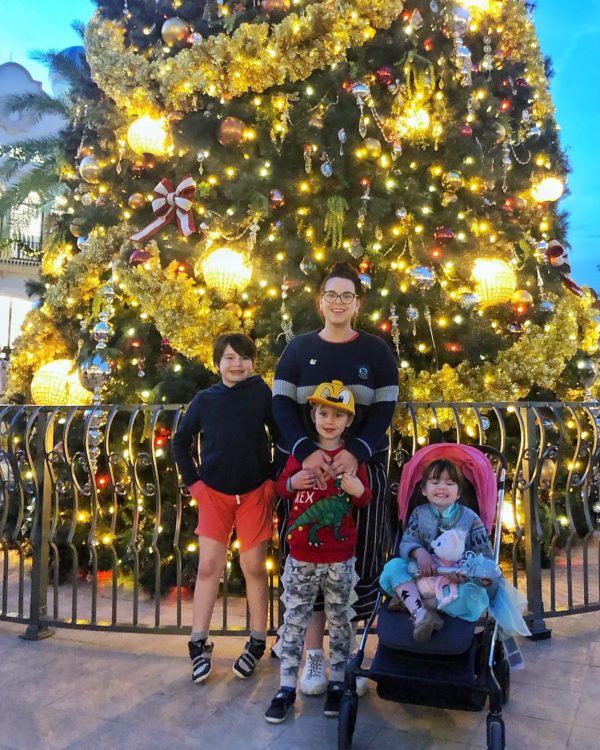 Have you ever looked at yourself as a parent and questioned how much you have changed?

Perhaps how much your children have grown and changed with you?
My friends over at Johnson’s Baby asked me to think about how I’ve changed as a parent and I think that has been thrown into sharp clarity for two reasons: our trip to DisneyWorld and Christmas time.

Firstly, our trip to DisneyWorld. There are several ways in which I noticed change here compared to our ﬁrst trip 2 years ago. When we ﬁrst went Edith was only 18months old, still breastfed and still sleeping poorly, up and down through the night and prone to shrieking when she didn’t get her own way (not much changed on that last one). I felt overwhelmed with anxiety that she might disturb the plane; that I would be made to feel ashamed/embarrassed breastfeeding her and that it would be 9hrs of pure hell. As it transpired she wasn’t great on the way there, worse on the way home because she developed hand, foot and mouth before we ﬂew and we had NO idea! It was pretty awful, she cried most of the way home and I was constantly popping her on the boob, despite being sat next to an older gentleman – my worst fear. Yet the man was lovely, he leant across when he could see how embarrassed I was an whispered “don’t you worry about my pet, I have two daughters. She won’t bother me… plus I’m deaf.” And you know what, that act of kindness allowed me the time to breathe and feel less panicked; but it also gave me the chance to reﬂect when I came home. Yes, it wasn’t easy, but it wasn’t as bad as I led myself to believe and in some areas it was worse BUT like with all things parental: it passed. It ended. I think that’s the way I have come to evolve the most as a parent, and revisiting DisneyWorld again, going on the plane especially: I’ve learnt that there is an undeniable truth in the words “this too shall pass”. No matter the phase: Reuben’s excessive attitude that we are currently dealing with – so much so that we had to take away his iPad last week because he was throwing himself back and forth like he was doing some kind of bizarre caterpillar dance on the ground after I asked him to do his homework and put his pjs on.

It could be Toby’s nightmares, Edith’s temper tantrums and smacking, it was once Edith’s refusal to eat anything and Reuben’s inability to listen to anything in class – both phases that have faded over time – it will all pass.

When I’m really struggling, and that is often, those are the words I now whisper to myself and I know they are true. This too shall pass and with it will come a whole new, equally challenging, equally rewarding phase. It’s certainly not one of those “enjoy it while you can” things because I know that is rubbish – no one enjoys everything about parenting, but it is 100% about not letting the horrible phases that you ﬁnd hard, the bad days, get you down.

As I said before, Christmas has shown me how much my children, and with it my parenting, has changed. Our Christmas Eve traditions are really precious to me, we spend quality family time together and all of us get excited about what is to come the following day.

It starts with a session of ice skating at McArthur Glen Designer Outlet’s Winter Wonderland – we never last more than 25-30mins, even though we buy an hour and we’re all TERRIBLE, but good god do we giggle (Adam hates it, he refuses to giggle whilst doing his bambi impression). After that we grab cakes and cookies in the little alpine style cabin cafe never to the rink, watch other families having a giggle and sink hot chocolates. We might head indoors for a quick lunch if everyone is still hungry and then we go to Build a Bear to make something snuggly for the evening. It’s in this last part of our tradition, something we’ve done for 3 years now, that I’ve noticed a change in my kids and my parenting. Reuben, for the ﬁrst year didn’t need to be pestered or bagged to join in ice skating, he was excited to do it, but he was less enthused about Build a bear, instead asking if we could go to the cinema and he would put his money towards that. The last few years I’ve stubbornly refused to allow him to shy away from joining in with ice skating, almost forcing him (ahem, actually forcing him) onto the ice, making him do a lap with me and then letting him go to sit with Maw Maw in the log cabin. Build a bear has always been his favourite part but he feels he’s outgrowing it. He sees it as something he maybe won’t do next year (unless they have Marvel teddies then OBVS he will make an exception) and for once I feel I need to be ﬂexible because I recognise that he is growing up.

Toby will still be going to Build a Bear when he’s forty, and Edith is still so little, but for my Reuben it’s time to start thinking about what could be a more grown up treat – perhaps the cinema (which he’s asked to go to this time), or perhaps allowing him to choose something from the gadget shop – I’m not sure, but with growing children I am sure that I need to allow them to grow, whilst still giving them the push to do those little things that they are nervous of like ice skating, because one day that might be the tradition they want to uphold.

This post was sponsored by Johnson’s Baby as part of my role as a Johnson’s baby ambassador so it is an #AD.