The Spring is here, and with it comes the start of the “prom planning” for most teenagers. It used to be that only American teenagers revelled in the delight that was the biggest night of the year, the prom, but now it’s a pretty western encompassing thing and UK teenagers are starting to plan.

Undeniably one of the biggest things for prom goers, baring in mind that these are a bunch of 15-16 year old kids, is getting dressed up. We’re taught from a young age that dressing up for females is far more important and exciting than it is for males, something that simply isn’t true, especially for my son Toby. More so than that, we’re taught that females have a certain expectation of how thy should dress, when attending a prom. In the US the prom is often centred around a certain level of sexual tension, this is randy teens we’re talking about here and they don’t really need Marvin Gaye to encourage them. With recent cases of sexual assault like the Brock Turner case, courting media attention it’s really no surprise that when one of the most prevalent colleagues in the country released a statement to help the excitable teens decide what dress to wear. The picture is below. 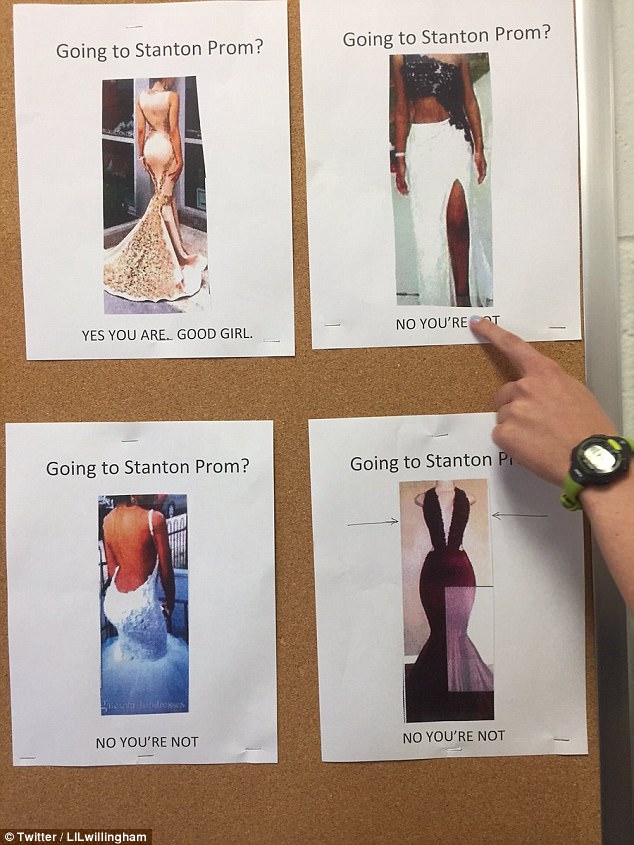 I mean, if you wanted to send a very clear message, this sure as shit does it doesn’t it. It screams, “come on ladies, cover up otherwise… well, that’s on your bare shoulders eh?” The unintended and subliminal message does absolutely nothing to discredit the perception that high school proms and colleges are a place where gender inequality is reaffirmed to the masses. The college poster uses terms like “good girl” to help mansplain to everyone what is expected of them, what kind of clothing should be worn. You can’t have these silly girls wearing the wrong thing and then blaming boys for getting all excited and misunderstanding the signals, “no” is soooo ambiguous after all.

It’s not something that effects me at the moment as the biggest part of my kid’s social calendar is still the Christmas nativity. It does effect me though, it affects every parent and every teen-to-be because ultimately it tells us that our society has such a long way to go before we stop victim blaming and start making leaps towards equality. I remember being a teenager, on the last day of term and excited to be FINALLY leaving school. My mum had gone to work, and being the rebel (totally without a cause by the way) I decided to don an Ann Summer’s nurses outfit over my tight jeans. A huge bunch of it thought it would be funny to get dressed up – funny it was, appropriate it wasn’t… but you know who complained and made me change? My male English teacher. And do you know his reason? He found my breasts distracting. Yup, you read that right. A fully grown man, who had been teaching my English from the age of 13 decided that an (excessive) show of skin from me was distracting to him. At the time, I donned another top – which my poor mother had to leave work to bring me, cringe – and never really thought any more to it, yet now as an adult, I question how this was acceptable, and why it was ok for a male teacher in a position of power to claim that he couldn’t continue with his job without being “distracted” by a minors breasts.

It goes back to that thing of, instead of telling him to get a grip and just get on with it like the two teachers before him had done because he was in charge of his own behaviour, I was expected to change because I was provoking him. As an adult I see a huge problem with this, what I was wearing was hella inappropriate, but was it cause for a man to be uncomfortable because he couldn’t concentrate? No. That’s just plain odd.

What women, or young girls, wear is totally irrelevant to how men behave, it’s about time that our society realised that the phase “look with your eyes and not your hands” isn’t just for wayward toddlers in museums.