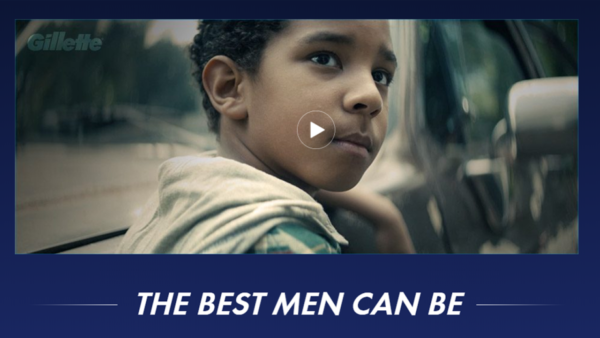 Cannnnn we talk about the Gillette ad for a second please?

I’m quite sure that you will have seen it by now, it’s not like it hasn’t made every news channel, every social media channel and hasn’t been picked over by the wonder that is Piers Morgan.

In case you’re not aware, the Gillette ad engages with the #MeTooMovement and takes the usual tag line of “a best a man can get” and turns it into “a best a man can be”, asking men to look at toxic masculinity, call it out and challenge it when they see it. It’s an advert that is deeply politically motivated and so moving using clips of reporting from the #MeTooMovement, focusing on how toxic masculinity affects our children and what they learn from terms like “boys will be boys” that excuse the very worst of male behaviour.

I love it. I really really love it. I think the point has been missed A LOT especially by women suffering from a case of internalised misogyny and men with the exact toxic masculinity that the advert rallies against, hence the fierce backlash that Gillette have received, with many going as far as to call for a boycott of the brand and all P&G products (until Mr.Protestor can’t get his Pringles for a Saturday night in with the lads, then maybe the moral outrage will slip a bit, cos it ain’t footy in wit boys (aged 40+) until there’s nibbles, innit.) The harshest critics call it an attack on all men (poor wee lambs), despite the fact that it literally says “not all men” throughout the ad, and offers examples of men acting with compassion and integrity and the fundamental impact that has on their children or the future generations watching them. The ad is pointing out that it’s time to say to the few who let the world down with toxic masculinity (cough, Piers, cough) to change their behaviour and the many MANY men who turn a blind eye to toxic behaviour on a DAILY basis to step up and ally themselves with women who are already calling it out. I can honestly put my hand on heart and say that I have never met a man who hasn’t – be it inadvertently or purely because they didn’t want the backlash of speaking out – supported or upheld sexism in some way, shape or form. It’s time those men who know damn well what goes on in our society stopped, allied themselves with the #MeTooMovement that Tarana Burke bravely founded and start questioning not only their own behaviour but the behaviour of the men around them. #MeToo is astronomically powerful on it’s own, but with the support of male allies, it could only grow in power.

Some of the arguments are that I read were that this advert took the #MeToo movement and painted women as weak and in need of the support of men. If you are one of these people who feels that way, then you may well have noticed something gliding over your head earlier, it was THE POINT. The woman in the boardroom could well have been portrayed to stand up and say “Actually, I meant what I say, please don’t belittle me or infantilise me” as many MANY women have to do day in, day out when they are belittled by their male colleagues but the POINT is that they should have to, this type of behaviour simply shouldn’t exist. This situation is one that anyone who has been in a meeting, especially in a corporate and male dominated setting, will be familiar with and the point to showing this situation was to highlight that toxic masculinity has far reaching consequences and we all need to see it, call it and put it in the bin with a healthy dose of gasoline over the top of it and a match. The woman being shown as cowed and submissive wasn’t anti-feminist, it was the way that countless women act day in, day out, and they would LOVE to speak up, but to do so could cost them their jobs. It was to highlight that this shouldn’t ever happen, that by supporting #metoo we can ensure that the next generation do a better job than we have.

The other rebuttle to this that really frutrated me was “what are they going to do for women since we’re all equal?”. Well Denise, since the rates for rape committed by women are so low and they don’t tend to be paid higher for the same job or murder their partners on a weekly basis, I’m not *reeeeally* sure what the point these anti-feminists make with “what will the female one be?” That being said, I am overlooking that it is *such* a priority in the world to ensure we don’t damage Male egos with calls to be a better human. I really do think people rallying against it miss the fact that they are moving against an advert that says “don’t be a sexual predator, don’t be a bully, don’t be a homophobic moron and try Uber hard to help raise the next generation without handing entire responsibility to teach life skills like humility, kindness and compassion to the female counterpart”.

As a society we can no longer ignore the Brett Kavanaugh’s, the Brock Turner’s and the THOUSANDS of other cases, most of which will never see the light of day where “boys will be boys” or victim shaming take place. It is undoubtable fact that men have seen and known about instances where women are being harassed or sexually abused and yet, and YET, they have turned a blind eye because it is so much easier than acknowledging we have a real problem.

If that isn’t enough to convince you, you only have to look at male suicide rates around the world. Toxic masculinity doesn’t just affect women, and that is why this is such a vitally important ad – it calls on men to take a stand on something that LITERALLY ends the lives of thousands of men a year, and that is toxic masculinity.