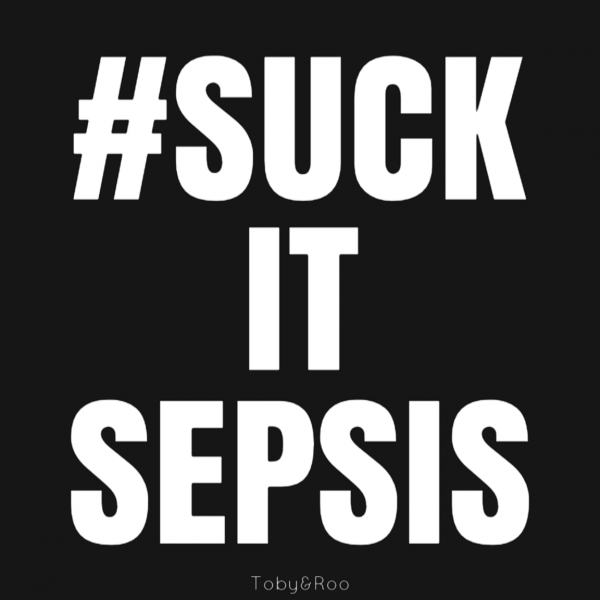 Let’s talk about Sepsis, something I’m all too familiar with. You see, I’m a Sepsis survivor. That’s a phrase you don’t hear terribly often because Sepsis kills over 6 million people (that we know of) and it is more deadly than cancer. All cancers. Yup. I’m launching a fundraiser today for Sepsis Trust, the campaign is called #SuckItSepsis because, quite frankly, I think it’s time that Sepsis really does suck it. You can donate here: SuckItSepsis

But the burning question? What the hell is it and why have the majority of people got NOT idea about it or how to spot it? Who does it aﬀect? How do you get it?

Well ﬁrst, I thought I would tell you my experience of Sepsis and why raising awareness of it is so dear to me and so very VERY important. Plus, it makes you read the post innit.

Throughout my pregnancy with Reuben I was super healthy and deliriously happy. I was so thrilled to be pregnant and, like a lot of expecting women I had a birth plan. It involved candles, hypnobirthing and a whole lot of mind of matter. Yes, I realise I’m all the lols at this point. Anyhoo, needless to say, things didn’t go according to the magical green pregnancy notes and that bless “birth plan” page. No, to cut a long (39 hours to be exact) story short I ended up having an emergency c-section, my body went into shock and it was all pretty terrible… but not uncommon.
I went home a few days later, stapled together like something out of a horror movie (The Human Stationary Store – sounds chilling) and I started my life with my new baby. About a week later I went to my GP, I had been suﬀering with horrendous headaches, sensitivity to light, fevers and shivers and I had a solid “mass” around my scar. Damaged tissue and what is commonly known as a haematoma – a collection of blood underneath a wound. It was so painful but it wouldn’t last, I wasn’t to worry. My wound looked clean, I’d been making damn sure to keep it clean – but NOT to over do it. Didn’t want to risk that infection. Nope, I was clean and dandy and maybe just over doing it.
I woke up in the middle of the night, I can’t tell you what time it was, probably around 1/2am. I staggered to the toilet, shouted Adam because I was covered in blood… or what I thought was blood. I remember thinking “Jesus, I know you have to wear sanitary towels the size of a fucking log between your legs because it’s like a blood bath but does it have to be THIS MUCH?!” Then I noticed the smell.

It wasn’t blood. Or it was, but not from where I thought or normal. Adam came to bring me a sanitary towel and change of pjs. Just to help really, it was a bit of a shock to bleed this much. I was drenched in sweat too, from head to toe, but so very cold. I remember trying to tell Adam that it didn’t smell right, I didn’t feel right but I don’t think I ever got the message out there. Adam switched the lights on and stopped. I can tell you now I will never forget his face, the horror, the realisation, the fear and panic. My mum, who lives with us, is a retired nurse was shouted straight away, Adam stood with me and instantly said to me “Harriet, don’t panic but that’s not blood… and it’s not coming from there.” I remember looking down and just seeing my section wound gushing (and I’d apologise for the graphic words if it wasn’t EXACTLY what happened) the most putrid, yellowish brown ﬂuid I have ever seen. It smelt horrendous and that smell stayed with me for so long.

We bundled Reuben into the car and Adam and mum came through to the hospital with me, I used one of those big thick maternity sanitary towels to cover my wound, eﬀectively holding myself together in more way than one. Sat in the A&E, in a nightdress and pair of soft pj bottoms that weren’t fully pulled up, not quite strong enough to hold Reuben, and dipping in and out of coherency. All nurses seem to have a manner about them where they have seen it all, done it all and it’s going to be ok. It both puts you at ease and makes you love them for giving you the peace of mind that you aren’t going to pop your clogs there and then. The nurse who saw me ﬁrst to assess how important it would be for me to be seen and to prioritise my care in the scale bustled into the room, smiles and chirped “lets have a look here then. Your wound has opened yes?”

Another face I’ll never forget. I pulled back the maternity towel for her to look at, she paled as the ﬂuid spurted at her, hitting her just on the left shoulder. I blacked out. I’m told she moved pretty quick and I remember coming round to be lifted into a wheelchair and rushed into a private room to have my wound manually drained. Reuben started to scream. Adam held him, held my hand… I don’t think that Adam will ever really talk openly about the fear he felt that night. It’s not something I really discussed often, but I want to tell the story to raise money for the cause.

For Sepsis survivors like me, for those who don’t survive and for those that we can treat.

My story ends with a positive ending. They drained the ﬂuid, agonisingly for me, they checked the cervix and made sure there was no infection there. I spent four days hooked up to all sorts of machines with IV ﬂuids galore, cannulas (the one thing I can’t stand!) and I was woken through the night to monitor for the ﬁrst 3 nights. Tablets every 4 hrs. Reuben couldn’t stay with me and, in a small way, it was a blessing I couldn’t breastfeed. I wouldn’t have been able to you know. Sepsis and septicaemia are one of the very VERY few things you can’t breastfeed with. The infection is in your blood you see.

So, I’ve shown you mine, now you show me yours. I’m asking people to share on social with the hashtag #suckitsepsis and I’m hoping to raise £5000 for Sepsis Trust. Share your story and experience if you have one, share what you knew about Sepsis, share what you know now, share any of the infographs below, I don’t care: just make sure you use the tag #suckitsepsis because I REALLY would love Sepsis to suck it. Big time.

Further to asking for your social support, I am asking you to donate to the cause, anything you can. £1, 1p, anything because it will make a huge different to the support that Sepsis Trust can offer to families affected by Sepsis and can fund better training in hospitals and for medical staff so that we can catch this sooner and save so so many lives. You can find out more on my Go Fund Me #SuckItSepsis campaign page here.

So, a little bit more about the mo’fo that is Sepsis: 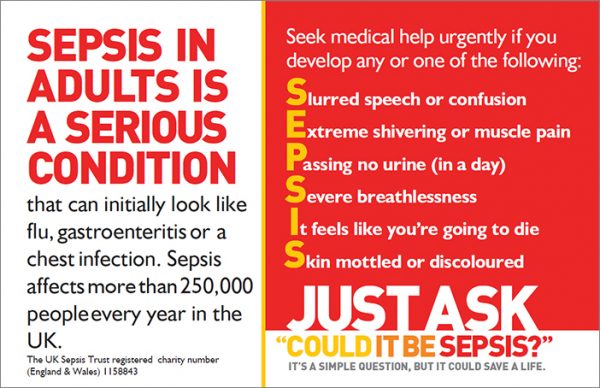 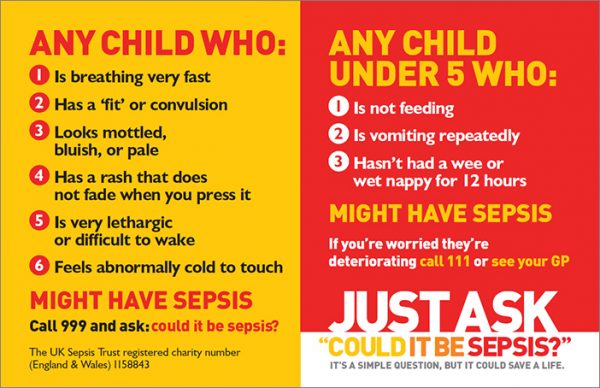 SEPSIS, also known as blood poisoning, is the reaction to an infection in which the body attacks its own organs and tissues.

Sepsis can literally occur as the result of any infection – from a paper cut to major abdominal surgery. There is no one sign for sepsis, it can initially look like flu, gastroenteritis or a chest infection.

Taken from the Sepsis Trust website, you are advised to seek immediate medical help if you experience any of these symptoms (easily remembered by S.E.P.S.I.S):

As for children, this is what you’re looking out for:

– Is breathing very fast
– Has a ‘fit’ or convulsion
– Looks mottled, bluish, or pale
– Has a rash that does not fade when you press it
– Is very lethargic or difficult to wake
– Feels abnormally cold to touch

Any child under 5 who:

Sepsis is the BIGGEST cause of deaths in pregnancy in the UK. The biggest. Every 3.5 seconds someone, somewhere dies of this, but if we catch it early it is totally and utterly treatable.

How do we prevent it? Well that is probably why Sepsis isn’t as popular for the media as other diseases, the short and easy answer is that it isn’t really something you can prevent or eradicate totally – our bodies will always be susceptible to infection and there will always be a risk of sepsis, the main thing to know if that we can treat this and really quite simply, IF we can catch it early.

So please, join in, share the message and get involved.