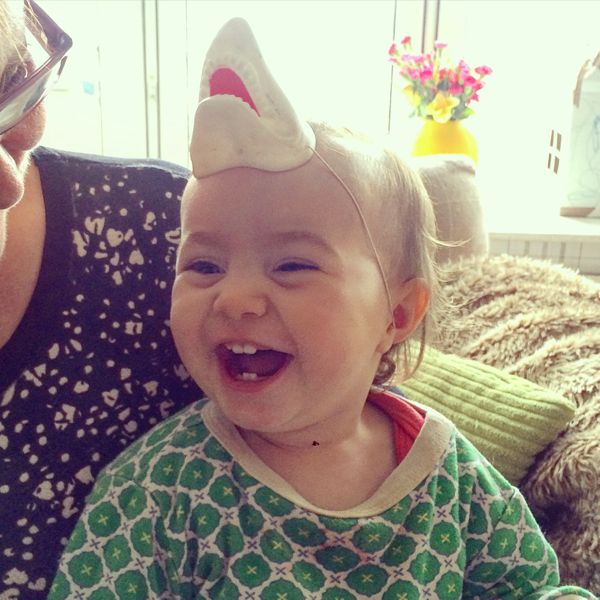 Last week a certain little Miss Edith Rose sprained her ankle. Yup, calling that a big fat parenting fail that my 14 month old managed to sprain her ankle, but it was just one of those things. We visited Tropical World in Leeds for the morning and decided that, since it wasn’t raining, we would pop across the road to have a play in Round Hay Park.

After sitting on the merry go round with her brothers, pottering about the play park and just generally gawping at older kids having fun, Roo asked if he could take her down the slide. I said absolutely, without a second thought. Why wouldn’t I let her 5 year old brother, who adores her, hold her on the toddler slide that I can’t fit my currently rather rotund backside on?

So, he climbs up, I lift her to him and they came down. It’s worth mentioning that a few minutes before Roo had picked her up and tripped with her in his arms, so he was already on my shit list but this little incident was 100% not his fault, despite him initially catching the blame. Edie’s new to wearing shoes, she didn’t know to keep her leg up and Reuben couldn’t stop her foot catching on the plastic of the slide. So that’s how it happened, her foot got caught, she twisted and sprained her ankle. Initially I shouted at Roo, I thought he’d squeezed her – something I later had to apologise for – bad mama.

I first noticed what had happened when, after a good 10mins of tears, I went to put Edie down to totter about some more and she couldn’t put pressure on her foot. At that moment I thought maybe she just needed to rest it for a few minutes and it would feel better soon. But no.

Que us packing up and taking an early trip home, only to find that 2 hours later she STILL couldn’t bare weight properly and was unhappy.

Like any loving parent, I want the best for my kids, it breaks me to think of them in pain. We live just around the corner from the local A&E so we took a little trip to get some advice and see where to go from there.

We were seen really quickly by a lovely nurse but immediately I felt really uncomfortable with a few of the comments: “She’s covered in bruises on her legs” and “Down a slide with a 5 year old at 14m?”

Here’s the thing: I am not a helicopter parent. That is to say I am not that parent that hovers over their kids, wraps them up in cotton wool and just generally frets over every bump and scrape. To me, that stifles childhood. Can you name a person over 40 who didn’t sprain or break a bone as a child because they were climbing trees, jumping in streams and pretty much constantly on the go?

Yet nowadays it has become a parent’s mission to make sure theta their child never has a scratch – we sanitise cuts, we have cool packs for bumps… we’re downright neurotic half the time!

It wasn’t the first time I’ve had the comment, nor the first time I’ve been told I’m “brave” for allowing Roo to hold her. The truth is though, I’m a very relaxed parent when it comes to bumps and scrapes. It’s not that I dot care, not even close, rather that I want to raise my kids to be free, to appreciate running and jumping and climbing – with that comes falling and bumping and hurting yourself on occasion.

Do you have any idea how much joy it brought the pair of those kids to come down the slide together? The smiles that graced their faces? This isn’t a baby that is mistreated or uncared for, this is a child who is idolised by a couple of rambunctious, energetic and rough brothers. I’m not allowing my 5 year old to babysit a 14 month old, I’m allowing him to be a sibling. I’m allowing her to learn through play.

So in short, Edie had an unfortunately accident last week. It wasn’t because I’m brave or careless, it wasn’t because her brothers are too rough. It was because she’s a child and I refuse to stifle that.