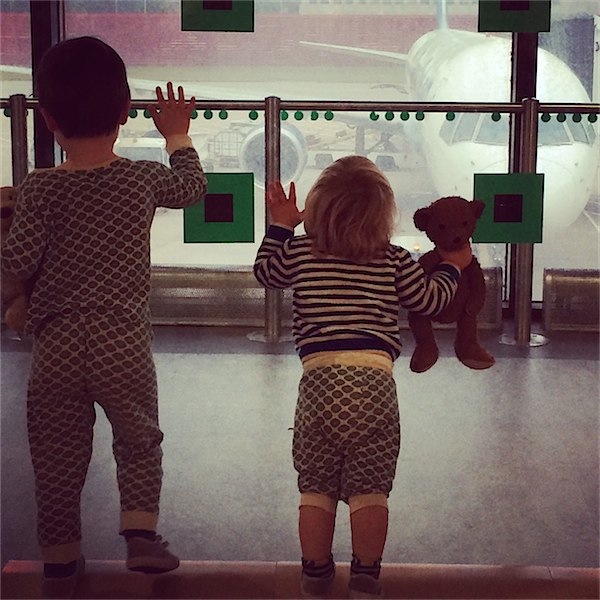 The boys behaviour on the flight home, not mention my own, left me wondering if we expect too much from children.

This is something I have been thinking about a lot over the last few weeks. After two weeks on holiday with the boys, I feel like I could use a holiday myself! I’m absolutely shattered, there wasn’t a day when we stopped and we just kept going and going, with so much to do and so much to see. We had a blast, but it has definitely not been the relaxing holiday of yesterday year where the tan is topped up and the cocktails flow.

I’m not complaining. I wouldn’t have it any other way, I have loved every minute of being with the boys and playing in pools, exploring bazaars and enjoying swimming in the warm sea. The journey home I did not enjoy, at all though and neither did they. They were tired, grumpy and just generally badly behaved. Reuben started the day by being rude and obnoxious towards me, deliberately defiant to his Dad and just, on the whole, a little rat bag. Toby was over tired and grumpy for most of the day, the child has an aversion to sitting still and displayed that aversion with a style that is rarely seen outside of zoos. I’m talking gymnastic style temper tantrums. By the time we got to the airport and got stuck in a huge border control que, I was about ready to cry and so were they. It didn’t even bare thinking about the 4 1/2 hour drive home.

I went from being the mother I like to think I am (the one I feel proud of and like to pretend I am all of the time) to being a raging, shouting, swearing (oh yes, swearing – and at the children too) monster that I absolutely abhor. I’m pretty sure I uttered the words, ‘ If you don’t stop doing that to people Reuben I am going to literally scream!’ Model your parenting from me people, just go ahead and consider me a guru.

Then something happened. A lady came up to me and asked how old the boys were. She had been watching them on the flight and had seen us all go from relatively cool and in control to frazzled as their behaviour deteriorated. I answered that they were 1, nearly 2 and 3 1/2 years old. She told me she was surprised by how well they had coped with a flight and how well behaved they had been, what lovely children. Was she seeing the same kids as me (at this point Toby was hanging upside down in a suspended crab because he didn’t want tot be held anymore and Reuben was casually trying to take the legs out of every person waiting for a passport check on his trunki)? I looked and at them and then back at her and she told me that for 1 and 3 you could hardly tell they were there, they had been quiet and well behaved for the most part, far better than most kids she knew who spent from take off the landing screaming or throwing things.

I couldn’t believe it, and then I looked at the boys again and really thought about their behaviour. Had it been so bad? Or was it more mine that had been questionable as the supposed adult? Had I lost my temper so many times with them because they were, in fact, behaving like normal children and I was the one ‘acting out’ because I was tired and frustrated? The simple fact is, children aren’t meant to sit still and behave themselves on travel days that take 14 hours, they aren’t meant be seen but not heard. They act out because they are bored and tired and fed up, just in the same way that we do.

My expectations of that trip home were just way too high. Why had my children’s behaviour been so much better on the way out? Had I asked Reuben why he had been so rude and uncharacteristically awkward/defiant towards me and his Dad since he woke up? Nope. So I decided I would. Do you know the reply? ‘Mummy, I don’t want to go home, I don’t want to go back to preschool and I’m sad that I can’t go to the pool. You said I couldn’t go after breakfast and that makes me angry and smashy.’ That is quite simply the same way I felt. I didn’t want to come home, go back to normality and the humdrum of daily life. The difference between me and a 3 year old is that I have years and years of understanding the way the world works and that holidays eventually end, life goes back to ‘normal’ and we look forward to the next one. If I could have a temper tantrum about it all without the social etiquette that comes with being an adult, or being locked up for criminal damage then I’d probably kick a few chairs too!

Toby isn’t quite 2 years old and feeds from his surroundings, if his brother is behaving badly then he follows suit.

On the drive home, after our little chat about the holiday being over now but that didn’t mean we had to stop having fun, and how he would see all his friends at preschool and his Grandparents the week after, Roo was a dream child. He slept for the majority of the way, woke up to ask for drinks, food or a toilet break and then drifted again. Toby followed his big brother’s footsteps and calmed right down, though he didn’t sleep quite so well because he was hungry and over tired. I spent the rest of the journey really thinking about how the whole day had played out and how I should try to adjust my parenting style from now on, to really avoid those times when you just lose your cool. I’m not saying I’ve had an epiphany and will never lose it again, of course I will, but maybe an unnecessary meltdown can be avoided by asked more questions, stopping for a second and thinking about why the boys are acting out. Validating the way they are feeling and possibly expecting, not less, but different outcomes to situations.

So, a little challenge for you. If you are prone to losing your cool, or you just find that you are doing it more often of late, then I challenge you to sit down and really think about how your child is behaving and what it is that they are doing that drives you so crazy. Is there a reason? Have you asked? Is there a time or a place that the behaviour worsens, and if so, could something be on their mind that they can’t express because they haven’t learnt how?

Give it a go, or if you already are a pro at this, let me know and tell me how you make it work for you… unless it’s with wine. Then go away and come back after January ok?