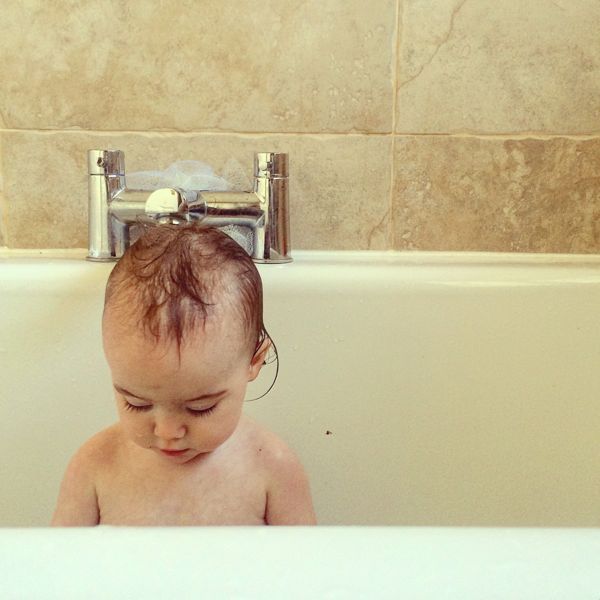 This is a topic that I felt totally unprepared to write. You can read hundreds of posts about little boys and their obsessions with their dingly dangly bits, but there is nothing, literally nothing, about when your little girl discovers her… hoo-ha.

So, here I am feeling like the only mum to a little girl would has discovered that she has a very interesting part of her body… I can’t be right?

Here is this morning’s experience:

I desperately needed to have a shower, I’m not saying I was beginning to smell or anything but I’m pretty confident that my hair could fry chips. So, I bundled everyone upstairs (much to the delight of Daddy who was trying to snooze) and let the boys play in their room whilst me and Miss Climb-on-everything got into the shower so I could keep her safe and wash my chip pan hair. As I was washing aforementioned hair I looked down to find Edith having what can only be described as an inspection of her genitals, and in great detail! Every time I looked down after that, a little hand was exactly there, having a good feel – just like the boys would do!

What?! I was told girls were more delicate than boys! Boys were only interested because of a dangly piece of skin, and the fascination grew because, well, men.

No one warned me that this was going to become Edith’s favourite spot (rapidly replacing her belly button, which was previously numero uno probing zone).

So why is it that we don’t talk about this? Every time her nappy is off, in the bath, running around nude, in a paddling pool… Everywhere, this has become a go to zone for her hands. Since I’ve asked other mums I’ve been told, it’s the same with their girls, but they are in no way as quick to discuss it or laugh about their daughter’s inhibition at this sweet, curious, innocent age, as they are their sons.

We seem to be able to have a good chuckle at boys obsessions with their genitals, “Haha, typical boy!”, “Boys will be boys”, “Just like his dad, nudge nudge” etc but we don’t have anything to say about little girls and their fascination for their own bodies.

Just to clarify, I in no way think that any child investigating their genitals is doing so in a sexual way – God knows if they are then there is something incredibly wrong – but rather that they have found a part of their body (much like those adorable squishy babies that find their feet) and they are interested in every crease, nook and – dare I say – cranny (*note: I have genuinely sniggered over the rhyming fanny and cranny… It’s been a long day). It is hilarious, their total lack of inhibition… The fact that this week alone I have shouted “Get your hand off your todger” in the supermarket, in a public bathroom and in the car – are all indicative of how it isn’t a big deal and we all have to remind our little gents to leave “Percy” alone. Yet we never hear the same said to girls, but I am currently experiencing proof that girls are 100% no different.

I can only imagine it’s a part of us, as a society, keeping females in the chaste ideal; innocent and uninterested in their bodies, whereas males are the sexual go getters… But that makes me sad because it goes back to the sexualisation of children and belief that their bodily discoveries are sexual.

So, this past week, Edith discovered her hoo-ha, foof, vagina – whatever you want to call it – and she will not leave herself alone. Can we all just have a good giggle and then warn future mothers that girls do, in fact, behave EXACTLY the same as boys when they discover the world beneath the nappy?