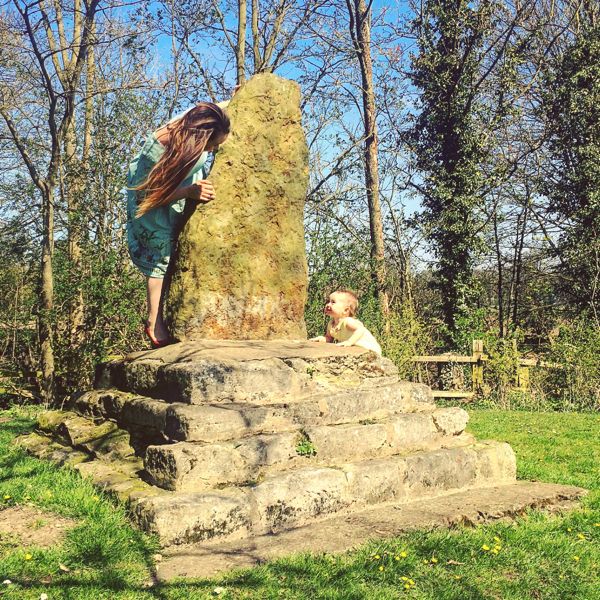 I often think about how what I say impacts the kids, usually after the event because, well I’m a touch thoughtless in the moment. I don’t mean swearing because I have expressed my thoughts on that before, however I do think there is something I do that I really need to knock on the head and that is talking about myself in a negative way.

I’ve always had issues with my weight, ever since I was young. I was a tubby child and as I got older I became really quite overweight. I guess I sought comfort in eating and the more I was picked on by other kids at school, the more I ate, the bigger I got. It’s a sad circle to be stuck in but not unusual by any means, lots of people find they have been in the same cycle or something similar that leads to them being unhappier and unhappier. When I was about 13 I decided I wanted my belly button pierced. I was an adult size 16 at the time and my mum told me that I could have it done if I lost weight… So I did. I lost a lot of weight, faster than any of us expected really. Let me just say, I might have been overweight but I was never really unhealthy. I was very active at school, I played hockey, Lacrosse and netball for the school. I went horse riding too. I wasn’t unfit, just, overweight. When I stopped eating sweets and fatty foods, I started to drop in weight. I’d choose a healthy option at school dinners, just like I was usually give at home.

Over the years I stayed a comfortable size 12, until I got to about 18-19, and then I started to put weight on again. Maybe it was the boozy nights out with Adam when we first met, or maybe it was trying to keep up with his amazing ability to eat an extreme amount of food and stay trim and handsome, but I grew and grew until I was 5″5 and a size 16 again. Then I feel pregnant, and I thought “Pregnancy is for eating right?!” So, que me having Reuben and a particularly depressing trip to Asda to buy some cheap, comfy clothes to fit me until I could get back into my own and I couldn’t fit into size 18 stretch pants. I was genuinely as round as I was tall, 16.6 stone and I was heartbroken. After years of bullying there is no way I was going to take this well, so I decided to change things up. I lost weight again. A lot of weight. I slimmed down to a size 10, 10.6 stone, and felt and looked as healthy as I wanted to be in my head. So far, through two more pregnancies I have stayed around the 10-12 mark… Though the extra stone I’ve continued to carry after Edith’s birth has really bothered me.

My error is in talking about it. A lot.

I inadvertently use phrases like “I’m so fat”, “No wonder it won’t fit me, I’m huge” and “ugh, I can’t eat that right now because I’m already too fat”. I say all of this in front of the kids, and recently I’ve been wondering what impression that leaves on them. To hear their mother always talking about her body image in such a negative way surely isn’t healthy. I hate to think that Edith will grow up to think that it is acceptable to feel so negatively about her body, to constantly look in the mirror and be critical rather than pleased with what she sees.

We already live in a society where our worth as women is marked by physical attributes all too often. Our weight is a huge part of what society deems to be attractive, thinner is better – more elegant, more stylish. I don’t want to encourage that misled perception at home, yet I am doing so with my constant downer on myself. It’s something I think I really need to work on, something a lot of us really need to work on, but it’s easier said than done!

I want to promote a healthy and happy body image to my kids, so it’s going to be a new way of speaking about myself from now on!