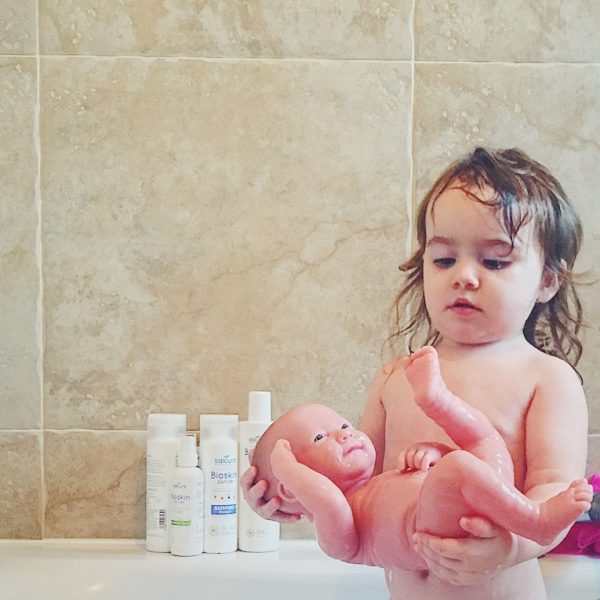 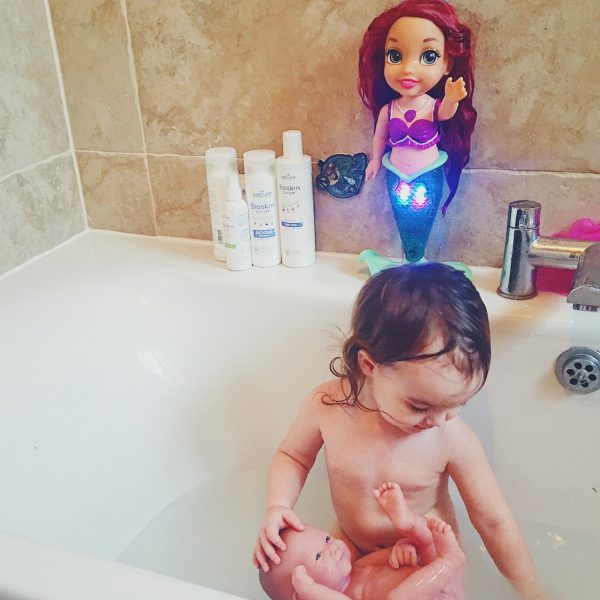 With preschool taking over 3 days of the week for little miss this week, I’ve tried to make it my mission to spend a bit more time with her instead of glued to the computer on the other days. It’s so hard because (like a lot of freelancers) I have his overwhelming desire to get on the computer and see if I can set up work for the coming months out of fear that I will miss something.

It’s becoming painfully apparent to me now that Edith is out of the house for short periods that I will miss something: her.

And I NEVER want to do that.

Yesterday she was snotty and neither of us had slept well at all. I had high hopes for a day out but it was cold and the general feeling of “meh” had engulfed me, so I went for the easy option… 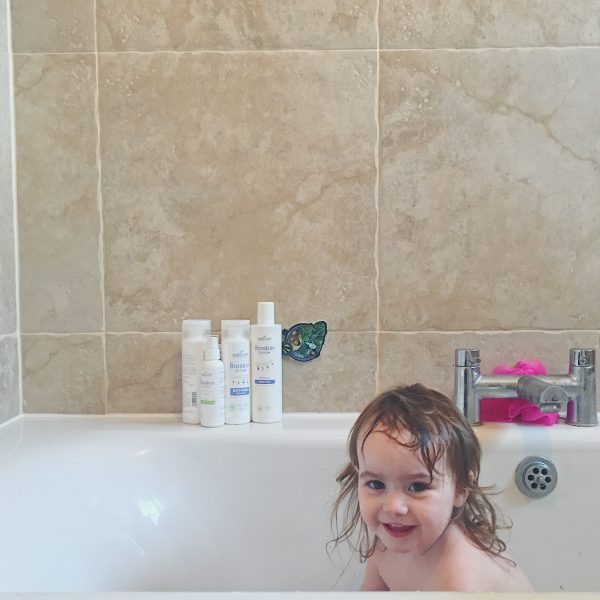 Edith is obsessed with her new doll (just a simple anatomically correct one from Mothercare) so we took Baby for a bath. She bathed her baby, I bathed mine. In fairness this wasn’t just a bit of splashy fun, though my leggings were soaked by the time she finished, no, this was also a clever way for me to try and get her cosy and relaxed with a warm, soothingly scented Bioskin Junior Salcura bath milk, in the hope that she would actually SLEEP. We’ve been using Bioskin Junior Salcura now for a little while and I adore it, it smells good enough that I’ll happily cop to using it on those rare occasions I get a child free bath (RARE occasion). We’ve also been using the rescue cream on Reuben who has developed a viral rash, and though he has steroid cream to clear it up, I’m so uncomfortable using that on him all the time, this cream isn’t medicated but works well on eczema so has had a really soothing effect on his itchy skin. … you can imagine it didn’t go down too well when Edith decided she wanted to put the cream on baby as well as wash baby’s hair and body… I draw the line at slathering up non-absorbent plastic in body cream!

I guess it’s not so much WHAT we do with our kids that matters, but that we do SOMETHING before we’ve blinked and they are off to school like Toby a few weeks ago, book bag swinging by his side, coat flopped open. I have honestly been looking forward to the day when Edith goes to pre-school, in the hope that I will be more productive and actually get stuff done, but now I miss her fiercely, if only for a few hours. The silence in the house is somewhat deafening and I can’t help but wonder what I’m missing.

I know on a logical level that preschool is a must for Edith, she needs to learn social interaction and how to “play” with other children, interact with others at meal times and how to behave around other adults, but I still find myself feeling that it’s all a bit too soon.