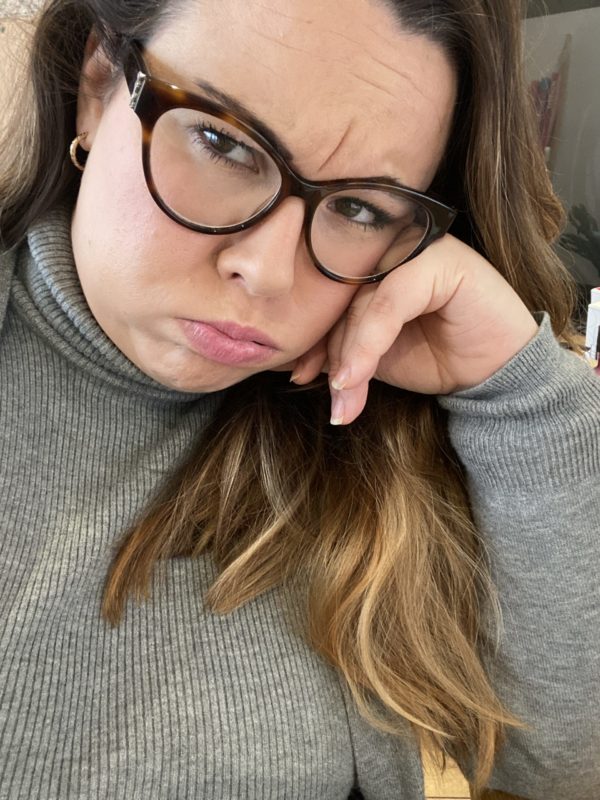 You know what sucks? Periods. If you’re female, of course you know this, if you’re male, you don’t know. You can be a gynaecologist for all I care, you don’t know and you never will, so shove oﬀ.

I am sat, in a scene from a meme about periods and motherhood, Christmas and birthday chocolate wrappers of shame around me after inhaling my children’s treats (plural people, PLURAL). I’m in ﬂoods of tears because I remembered a mean comment someone made about me online two weeks ago, and I want a cup of tea. I’m knackered. My boobs are itching and I’m sporadically scowling at Adam for daring to exist and that annoying BREATHING that he is doing.

It’s no laughing matter people, periods are awful. Adam has practically run into the kitchen to make me tea, just to get away from me, the cat is terriﬁed by my snotty, tearful face and the kids will not believe me when I say they ate their own eggs. They know.

Let us count the ways…

I feel like I’m being pumped full of air in the night like some kind of balloon. I’m Aunt Marge on the wrong side of Harry Potter but less of a bell end. Actually, scrap that, I’m EXACTLY as much of a bellend. I want to smack a bitch for breathing and my looks have made grown men weep today. Specifically Adam. My wedding ring feels uncomfortable and I swear it’s because of the swelling and not the chocolate. Fuck you, it is NOT the chocolate.

I am bleeding from my vagina, at what point did the universe go, “Nah, mate, she needs to be fucking mafting to do this. Crank up her heat to level unbearable, she might actually combust. Or kill someone. Be a RIGHT laugh.” Bastards. I have never understood why, but when I am on my period I wake up feeling closer than ever to Moby Dick because I am drenched in sweat. Drenched. I have to change my bed sheets at least twice during my period and my kids have taken to asking if I too have an issue with bed wetting.

3.) The Anger and Aggression

If there is ever a case of murder where the woman is the accused and she has murdered someone for some vague and, frankly, minuscule reason like looking at her the wrong way or making some ridiculous comment about her arse looking nice when it clearly doesn’t because it’s swollen and SWEATY (you, Adam, aimed at YOU) then I would like to be on the jury because I will acquit her. I will and so would most women. The rage over such small things is unreal. UN. REAL. It’s also so spontaneous and totally unexpected. I can be mid conversation and BOOM: Meet Mrs Hyde, she ate Mr Hyde and Dr Jekyll can do one.

WHAT IS THIS?? I am not a crier. Often. Forget what Adam says, he’s a ﬁlthy liar, I am NOT a crier. Until I’m on my period and then I am the human version of Niagra Falls. Here is a short, but fulﬁlling, list of things I’ve cried about in the last 24hrs: my dead cat… who died two years ago, lambs in a ﬁeld because they are so cute and we eat them, Owlette feeling left out in PJ Masks, because I’m tired and ﬁnally, because I really wanted a Chinese and the take away is closed for 2 weeks for staﬀ to have a holiday.
You’re welcome for the giggles, I hate you all.

5.) The actual bleeding itself

BORK. Seriously, we don’t talk about this because it makes people say “ew” and it makes us cringe in the same way that the word “moist” does, but fuck it, let’s go there. Do you know how many pants I’ve ruined with a period? Too many, because I shouldn’t be having them. If there was ANY sense to our biology we should just have an egg drop out and be done with it all. Do we really need to have a period? No. Bleeding is gross. Blood is gross for anyone who isn’t a vampire. Just no. And not being able to feel conﬁdent or secure in white is absolute bollocks for a week every month. Bollocks.

Geez, I wasn’t sleepy enough with three kids, a whole petting zoo worth of animals, a business, a house, a vague memory of a life to cling to, nahhh, that wasn’t enough. So now, I’m shattered on top of it because I’m *literally* losing the stuﬀ that keeps me alive via my chuff and all my remaining energy is being spent holding back tears and avoiding stabbing Adam with kitchen utensils. Seriously, the extra tiredness is awful, it exacerbates everything else too.

Now, I’m #blessed because I don’t get these much. I spend the majority of my period feeling like I’ve got a touch of trapped wind and occasionally it’s slightly stronger. I’ve never suﬀered with pain, real hard-to-cope-with pain. I was gifted with homicidal thoughts, sweats and tears instead, but I will take those things and actually be grateful because for SOME women, lots of women, Aunt Flow shows up with horrendous cramps and that, my friends, is bullshit. Who needs that?! Who needs to be in pain for no reason whatsoever? Not me. Not anyone. Periods suck.

And there you have it. 7 reasons why periods suck, they are the WORST and now if you’ll excuse me I have to go and work out how to start on the Easter eggs that I’ve bought the kids in pre-emptive fashion.