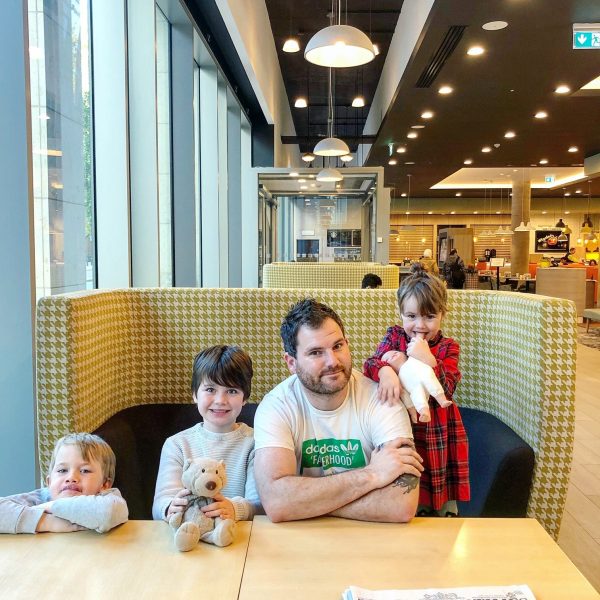 Adam has been a stay at home parent for nearly two years now, it’s had it’s ups and downs – I have lost my shit on more than one occasion when I’ve had to point out that not once did I ask him to do more than sign a school form, I filled them all out and that errands into town for his shit were just something I did on the daily when I wasn’t working. It’s been a rollercoaster of feeling immensely proud of him and grateful for his ability to be there and help with the things that I was struggling with and feeling like I was a mug for 6 years doing absolutely every single thing (apart from the bins) whilst he does some stuff and then reminds me that he’s become a stay at home parent, not a slave.

Despite the niggles and the days when I have felt like saying to him that he should go back to work because,  frankly, Miss Perfectionist over here might have been giving herself stress palpitations and dropping all the balls but if you tell me one more fucking time that you are “just having a sit down” when I can see stuff needs to be done, I will kill you and bury the body in the playroom where we can’t seem to find shit, I think our new routine is beginning to work better every day. The children are flourishing having both of us at home more or less 24/7 (even if I’m technically working, I’m still there and I do, frequently, drop everything for a cuddle or a snack request) and our relationship seems stronger than ever.

The building work has hit the routine really hard and now that everything is almost finished, we’re starting to get back to some normality. I mean, we still have very different ways of doing things – I would have wanted to clean, despite the decorator being here still, and Adam just doesn’t think it’s worth it. The upstairs is a shit tip, but we can’t really do much about it other than titivate, and that is unlikely to be useful.

There are, however, a few things that really frustrate me about being the wife of a stay at home parent, and upon speaking to Adam it throws our roles into a sharp contrast as it was never the way he was made to feel or the attitude that was pushed upon him when he was the primary earner and I was the stay at home parent (or even when I was also working but everyone just assumed I was a stay at home parent). Here are a few of the things that we have had said to us of late that throw our roles as parents and the inequality in those roles into focus and remind us just how out of touch society is.

No one, and I do mean absolutely NO ONE, ever said to Adam “You’re so lucky to have a wife who is such a good mum and takes on responsibility for the kids.” Can you even imagine the confused faces if one of the other wine merchants blurted that little number out as they all sipped and spat wine around a wood-centric room, discussing the undertones of berry and oak in their Shiraz (I have no actual idea if you have undertones of berry and oak in Shiraz, all I know about it is that its red and I don’t like it but Adam does. I think.) People, including those who consider themselves raging feminists, often say this to me. I’m so lucky. I am not lucky to have a man in my life who loves his children, steps up as a parent despite gender discrimination and the assumption that he’s  a second class citizen in parental land. I’m not lucky that he’s “good” with his kids. This simply makes him an adult and not a man child, if the man is your life is the latter, perhaps you need to start to consider telling him to grow the fuck up and step up – believe me, when I think Adam is slipping into man child mode (and he does) I let him know.

2. The kids are doing so much better with Adam at home.

Well duh. Have you ever tried to read a book about Kipper (twat) and his sister Biff (bigger twat) with a really reluctant 6 year old who would list doing his reading homework below poking himself in the eye to see if it hurt on the reciter scale of fun, whilst simultaneously trying to cook dinner, answer the demands of an 8 year old who simply MUST show you his latest lego creation and answer an email that requires an answer before 5pm and it’s 4.52pm? I have. Many, many times. Is it any wonder that having another adult in the house who can exclusively dedicate his time to the bastard book reading and applaud the 8 year old whilst I cook and answer the email? It’s not, no. Yet Adam is a father, father’s must be praised for the ordinary whilst mother’s must be extraordinary without said praise.

Well, believe it or not, recently our mortgage took this radical decision to take money earned by women in form of payment. I know. Mental right?

4. Doesn’t it seem weird that Adam is at home all the time? I would kill my husband.

Contrary to popular belief, as encouraged by the Daily Fail, stay at home parents aren’t sitting on the living room sofa watching This Morning and enjoying a relay of biscuits and tea whilst they chat to the benefit helpline. Adam and I spend less time together than you would think. The little things are genuinely lovely, the kiss I get on my cheek when he asks me if I want anything when he comes back from the school run, the banter when we shoot images together (it’s easier and quicker than setting up the tripod), the things that we chat about when we have a few minutes, but unlike you might think, I’m focused on work and often totally ignore everyone and everything around me in favour of grunt responses and he has taken to wearing headphones to listen to some music whilst he cleans/does laundry (he’s always been a better cleaner than me. I don’t make him wear a maid’s outfit <– this is sarcasm.)  We mostly enjoy spending our time together but we don’t have this overwhelming sense of smothering because we’re both busy cracking on with the things that need to be done.

5. It’s so impressive that Adam has taken on the role of PTA chair (or as we call it “Friends of school”)

It’s wonderful that Adam has jumped into this role but it’s no more noteworthy than a mum doing it – and I guarantee if it were a mum (say me) it wouldn’t be impressive at all. Come on people, there is giving someone credit for being the awesome human that they are (which he is most of the time, in my opinion) and then there is high fiving someone like they are a needy 5 year old for just for taking on the same role that is stereotypically seen as female. Side note, I warned him not to do it and he is HATING it. Giggles.

6. I think you’ve (Adam) forgotten what it’s like to be at work all day mate.

Said to Adam by a good friend when he called him on his bullshit. This friend was talking about having a go at his wife for not having the dishes clean when he got home, and I’d like to point out that she has a very young baby to care for and is on maternity leave from her professional job. The words “You have got to be fucking joking” and a tongue lashing about how it’s possible to wash the dishes yourself were Adam’s choice, only for him to be told the above. Another misconception that it’s all about sitting down or nipping out for coffee when you’re a stay at home parent.

Look, I have never and will never view being a stay at home parent as a job – it’s not. I truly believe that to call it such is as ridiculous as calling it “stay at home” parent when half of the time you are running about getting everything organised for everyone else in your life. It’s hard, it’s emotionally and physically draining at times and it’s never ending. There is no weekend to look forward to, there is no end of day because you can go to bed and be on call 24/7. Trust me, having worked, been a stay at home parent AND a work from home parent, I can tell you that at every point you will think you have it hardest – you don’t, we’re all struggling in the absolute shitter that is being an adult.

So those are the 6 most frustrating things that have been said to us since Adam left work, though I hasten to add there are many more than these, many more indeed. Adam is often the recipient of the more obvious remarks whereas I’m treated to a reminder that he appears to be a better parent than I was and what a miracle that is, just through his showing up. Our experience with Adam as a stay at home dad is 100% an eye opener and whilst a lot of comments are said with love, a lot are just a pure lack of understanding that men too are parents and women are capable of doing something after they have given birth.